Hello there. My name is Isaac. Isaac the Bear.

That wasn’t always my name. In fact, it changes every year.

You see, I was born in 2004, and when I was very young, I was taken from my family and given to a Primary School in Sandbach, to be handed out each Friday to whichever Year 1 child has won the ‘Star of the Week’ award. The child then gets to take me home for the weekend, before I am returned to school on the Monday.

As each new school year starts, the children have a vote on what I should be called, and I get renamed. To be honest, it’s a little degrading. Just as I get used to being called one thing, they go and change it to something else. And it’s never anything tough-guy sounding or cool, like ‘Clint’ or ‘Brad’ or ‘Greg’, it’s usually something unoriginal and lame like ‘Teddy’ or ‘Cuddles’. I deserve to be called something cooler than that. Look at me – I wear a waistcoat for fuck’s sake.

Last September, as the new Year 1 Class started, a young boy called Ollie suggested the name Isaac, as it was the name of his baby brother (I have since met his brother, and I’m surprised the parents didn’t call him ‘evil little thug who never sleeps’ to be honest). Anyway, Isaac is one of the better names I have been called over the years, so I was quite pleased when the rest of the class voted this as the winner.

The downside to staying with a new family every weekend, is that I have never really had somewhere I can call home, but I guess it beats sitting on my own in a dark classroom until Monday morning. Plus, I get to see lots of really cool places, and meet some interesting people.

The reason I get to travel so much is that, whenever I go to stay with a family over the weekend, they are expected to complete a little book, with photographs of what we have been up to. Since the parents can be quite competitive, as soon as they discover that their darling son or daughter has won Star of the Week, it’s amazing how their weekend plans can suddenly change from popping to Ikea and sitting outside a pub, to visiting Chester Zoo, going to Alton Towers, or even skiing in the Alps. It’s awesome.

Last Friday, the children broke up for half-term, and the little boy who named me, Ollie, was announced as Star of the Week, so he got to keep me for the whole of the holiday.

Great, I thought (sarcastically), a whole week of trying to avoid being chewed, maimed or de-stuffed by that demonic brother of his.

Anyway, when we got back to Ollie’s house after school, I could see that lots of bags were being packed to go away somewhere, and I have to admit I was looking forward to a week in the sunshine, lazing by a pool with a few beers, and checking out some fine European teddy-ass. If you thought teachers got excited about half-term, try being a bear who gets dragged around everywhere by ungrateful kids, and who hasn’t seen a bath in months. I needed a holiday.

As it turned out, my excitement was short-lived, because Ollie and his family were only going to London for the bank holiday weekend. Still, a weekend away is a weekend away, and I was just grateful they weren’t going to Blackpool again.

When Ollie’s Dad arrived home from work, he started frantically loading the car, and he seemed to be in a hurry to get going. He was saying something about the ‘M6’, whatever that is, and how it can be a ‘bag of shit’ on a bank holiday weekend.

As it happens, we made it to the outskirts of London in pretty good time (which was lucky, because I was starting to lose my furry little mind watching non-stop SpongeBob SquarePants on the car DVD player), however we then joined something called the ‘North Circular’ and Ollie’s Dad got a bit anxious and shouty.

I have to say I don’t really blame him, as some of the other drivers (the ones I could see when Ollie wasn’t dropping me on the floor between his feet) were maniacs. They kept changing lanes at the last second, then changing back again almost immediately. It seemed as though they either couldn’t make up their minds where they wanted to be, or they were just doing it to annoy the other road users. It was honestly like the dodgems at a fair.

After one particular near miss – with a driver who seemed to want to be in whichever lane he wasn’t currently in – Ollie’s Dad started waving his arms and doing some hand gestures I hadn’t seen before. Then, Ollie’s Mum shouted at him to stop it, and said something about all the drivers around these parts having knives, so that seemed to calm him down a bit – as he was too busy laughing to be angry.

The sat nav wasn’t much use either, as every half a mile or so, she would simply instruct Ollie’s Dad to ‘keep right’. In the end, we had kept right so many times, I started to think we might slingshot the whole of London and start heading north again (a bit like the way they slingshot the moon in order to get home in Apollo 13).

Thankfully, we made it to where we were staying (at Ollie’s Uncle and Auntie’s house in Walthamstow), in one piece, and not long after we arrived – which was late in the evening – it was time for bed.

On the Saturday morning, we took a bus and a couple of tubes into the centre of London, as Ollie wanted to go to the British Museum to look at the Ancient Egyptian exhibits. Ollie’s class are studying Ancient Egypt at the moment, and he initially wanted to go to Egypt on holiday, but his parents said it was too expensive, and probably too dangerous, so he would have to make do with the museum instead. 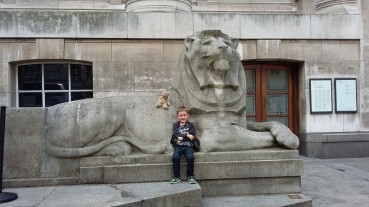 Didn’t even know this one was being taken. Was too busy checking out some totty by the Reception desk lol

When we arrived, we met up with another of Ollie’s Aunties, and we were advised to go to the Family Desk and collect an explorer pack – which was basically a rucksack only slightly smaller than Ollie himself. It was filled with activities to do as he visited the various rooms. 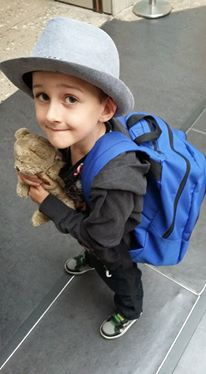 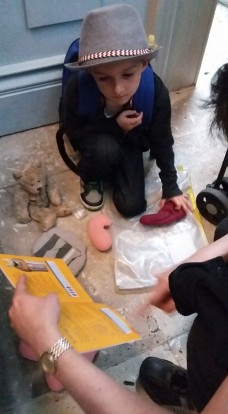 We spent a couple of hours looking at the exhibits (although, to be honest, it was all just a load of dead stuff in bandages to me), and then we went for lunch. Ollie was given responsibility for choosing where we would go, so naturally we headed for the nearest Pizza Hut. What is it with kids and Pizza Hut? What’s wrong with a picnic? I swear to the Teddy Gods, if I see one more sodding Pizza Hut, I’m going to start hurting people….

In the afternoon, we headed to Islington to go to a family party – which, it seems, was the main reason for travelling to London in the first place – and I got stuck next to Ollie playing monopoly for over two hours. Everyone else was drinking beer and eating food, while I had to sit there watching Ollie slowly count out fake money. I nearly lost the will to live.

Fortunately, just as I came close to pulling all my own stuffing out, I noticed that Ollie’s Dad had left his beer unattended, so I managed to sneak a swig. It was at this point that I spotted lots of unattended drinks, and since nobody seemed to be paying the blindest bit of notice to me, I made my way around the room.

After that, my memory gets a little hazy. I vaguely recall staggering back to my seat next to Ollie before anyone noticed I had gone, and the game of Monopoly appeared to have just finished. Ollie was counting up his money, and I remember him asking his Dad what ‘three million and twelve, plus twenty-seven’ is. I think I muttered something about him being full of shit, but then I blacked out. I have no idea how we got home.

The next thing I remember, I was in Ollie’s bed, with him snoring like a wild pig next to me. His parents seemed to be calling it a night too, as I looked up and saw Dad – wearing only his pants – dancing and singing ‘Uptown Funk’. And I thought I was pissed. It took all my strength and concentration to stare at him and make him feel uncomfortable, but it must have worked, as he noticed me staring and immediately stopped. Then I passed out again.

On the Sunday morning, Ollie dragged me downstairs for breakfast (although even the sight of his Rice Krispies made me feel nauseous), and his Mum mentioned something about going to a trampoline park. Fantastic. I had the mother of all hangovers, all I wanted to do was go back to bed and cry, and now we’d be spending the morning fucking bouncing.

When we got there, I have to admit I was hoping Ollie would just leave me in the locker. A small, dark, confined space, was just what I needed. Alas, no such luck. In fact, not only was I dragged over to the trampolines, but Ollie then handed me to my demonic namesake, so that he could run off and have fun. I sat through two hours of mind-numbing Monopoly, and this is how he repaid me. 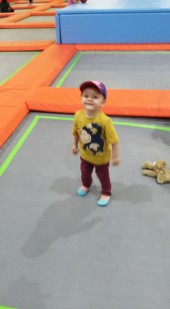 Me with my namesake, trying not to throw-up on the trampoline

I was just starting to feel really sorry for myself, when the session thankfully ended, and Ollie’s parents began discussing lunch plans with some other relatives who had turned up to meet us. It was at that point, I heard the word that every hungover person everywhere wants to hear: Nando’s. I nearly cried with joy.

Ok, I had to spend the first half hour propped up against the menu, to stop myself from falling over or being sick, but it was worth it. When you are hungover, a cheeky Nando’s cures everything.

Just for the record, that stain on the table wasn’t me.

So, that’s it. My weekend in London. I don’t know if anyone will ever get to read this, but I was getting bored of kids describing their weekends with me, and decided it was about time I told the story myself.

Besides, I overheard Ollie’s Dad saying that he had ‘bugger all’ to write about in his ‘blog’ this week (whatever one of those is), so I’m going to leave this lying around in the hope that he might publish it for me….