Over the last week or so, I have gained a number of new followers – welcome.

To bring you up to speed, my blog is published every Friday via WordPress, and has no real theme or topic. It’s not a blog on cooking, or fitness, or parenting (although parenting often features, because our boys are an almost endless source of comedic material); but is instead a random collection of whatever shit happens to be mulling around my head at the time, or going on in my life, and which I think you may find amusing. In a way, this is like therapy for me, because my brain can be a very dark and foreboding place at times, so it’s nice to share my weirdness with you all (for free).

Despite there being no particular theme to my blog, this year I have set myself a challenge to run ten 10k races for my chosen charity, Kidscan, who are a children’s cancer charity based in Salford – and I have been posting a ‘report’ of each race after the event.

If you haven’t read any of these ‘running’ blog entries, then please don’t be put off from reading any further. They are nowhere near as dull as they sound, thanks in no small part to the fact I am utterly shite at running, and catastrophe usually befalls me when I don my running shoes. Plus, each of my ten races this year are somewhat unique, and hopefully these blog entries will serve as a nice record of my charitable exploits in years to come. Future generations may even mistake me for a nice guy.

(Oh, and if you have read any of my previous running entries, don’t tell the newbies that the last paragraph was complete bullshit, ok?)

Anyway, for all newcomers, and as a reminder to the rest of you, here is a brief summary of my challenge so far – and, if you wanted to read any of them, there’s a handy link to each entry underneath):

Ran around a race track in very cold temperatures. Hated every second.

Completed a circuit of the village where I grew up (and now work). Hated every second.

Ran too fast around a very steep course, collapsed near to the finish line, spent some time in hospital. Needless to say, hated every second.

Still shaken by the events of the Whitchurch 10k, this was my slowest race to date (by some margin) as I had to stop and walk a few times. Hated every second.

Rather enjoyed this one, just a few weeks ago (only joking, I hated every second).

Anyway, last Sunday I took part in my sixth event, in Alderley Edge (posh Cheshire), which entailed running down the A34 bypass… then back again. It doesn’t really matter if you are familiar with Alderley Edge or not, as I am sure you can imagine a single-carriageway bypass, but just in case you are desperate to visualise the event, here’s a photo:

Believe it or not, I am on there, so feel free to play your own version of Where’s Wally? (or Where’s Waldo? for my American following). To help you, I am wearing a purple running top.

Ok, a bypass is not exactly the most interesting of routes, but the organisers relied heavily on two unique factors, to entice people into entering their particular event:

It also seems that either the organisers themselves, or someone involved in the setting up of the race, had a similarly twisted sense of humour to those behind the Colshaw Hall event two weeks earlier. If you read that entry, you may recall that there was a particularly nasty hill, which had not been referred to on any of the pre-race documentation, and the organisers chose to place this sign at the top of it:

Anyway, the Alderley Edge team (or some little fucker gone rogue), decided to go one better with their own version of a ‘motivational’ sign, because shortly after the 2k point, when all the runners were already starting to flag thanks to the heat, there was a very obvious ‘Just don’t be shit’ sign by the side of the road. Ok, it was actually ‘Just don’t be Sh1t’, in a lame attempt to avoid any ramifications, but it would hardly take Alan Turing to crack that particular code, would it? Fortunately, I thought it was pretty hilarious, but I suspect someone may well have taken issue and kicked it down by the end of the race.

Anyway, I have been rating the various events against each other, so here are the results of the Alderley Edge 10k:

Time: 49:48 (which is just about within my unofficial target of finishing each race in under fifty minutes)

Position: 423rd out of 1,733 (so still in the top third, which is another unofficial target of mine). Interestingly, over 2,200 people entered the race, but a handful failed to finish, and several hundred didn’t even bother to show up. Wimps.

Cost: £19.50 – which is one of the more expensive races, but the organisers (Run Northwest), allow you to enter both this and the Wilmslow 10k (which should be my final event in November), for a discounted price of £29.00, so they’re really £14.50 each. Bargain.

Course: As you might imagine, a bypass is not the most interesting of routes, but when it comes to running, I’m not really in it for the scenery anyway. Plus, running down a predominantly straight road – and then back again – has certain advantages: it’s easier to keep track of your progress (and even easier to work out the half way stage, as it’s the only time you turn around), plus there is very little scope for getting lost. Add to that, the fact there was live music at four points along the route, and it wasn’t as dull as you might think.

The course itself was mostly flat, nice smooth tarmac, and with no chance of any stupid / aggressive motorists ignoring the road blocks (even though I did nearly get hit by an ambulance dashing to the aid of a fellow runner), it was easy to concentrate all my efforts on not dying – 7/10

Weather: Too. Bloody. Hot. Ok, as with the other events, I can’t really blame the organisers for the weather, but baking heat is sometimes a risk when you organise an event for the start of July, even if this predominantly-overcast country of ours, so they have to accept some responsibility. Still, at least it wasn’t snowing – 6/10

Organisation: Very well organised. Lots of pre-race information, contained in a nice little booklet – which was posted out to us with our running numbers (and timing chips) the week before. There were several enthusiastic and supportive marshals along the route, two water stations (due to the heat) – which were both efficiently manned – and plenty to do at the Race HQ, for those not taking part themselves – 8/10

Official Photos: Free to download from photographer Mick Hall’s website, and to have all 20,000+ uploaded, and individually tagged (so you simply put your race number into the system, and it brings up all the photographs you are in) within a couple of days, is extremely impressive. As per usual, I look like I could die at any second in all of the ones I feature, plus I appear to have developed a rogue left arm when I sprint finish, but that’s not Mick’s fault – 9/10 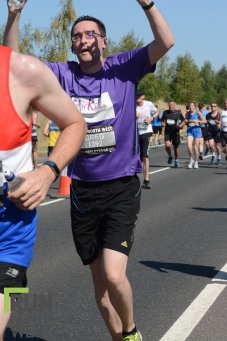 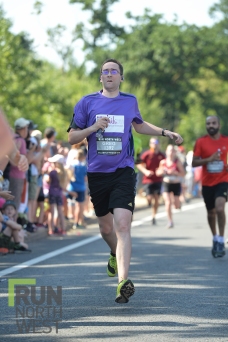 And here are some my wife took before, during, and after the race: 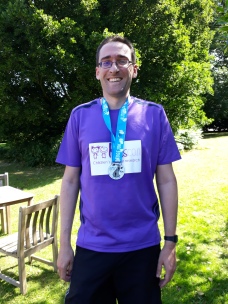 Medal: Sizeable, thick and heavy (three words which can also be used to describe me) – 7/10

Goody-bag: Difficult one to judge this. Normally, when there is no goody-bag, I am highly disparaging of the event, and give a low score as a result. However, the organisers quite cleverly stated that the lack of goody-bag was to save on plastic (so I would look like a dick for complaining), and they did give us a rather fetching running shirt instead. In fact, this is my favourite running shirt of the three I have received so far this year (the others being at Oulton Park, and the ill-fated Whitchurch event) – 8/10

Post-race refreshment: Plenty of water, and a nice selection of flapjacks. I opted for caramel (not that you care), but it was delicious and, had I not been feeling sick to my stomach at the time, no doubt I might have had more than a nibble, before my eldest son scoffed it. Still, no jelly babies though – 6/10

I now have a nice little break until 19th August, when I’ll be running the Birchwood 10k (no, I haven’t a fucking clue where Birchwood is either), and, as ever, if you’d like to chuck some money towards a fantastic cause, here’s the link:

Oh, and for anyone still trying to spot me on that bypass photo….