I may have mentioned this once or twice recently (or, if you know me in ‘real life’, every fucking day), but I shall be turning forty in just over two weeks’ time.

Now, the prospect of entering a fifth decade of existence does not exactly fill me with joy, and if I were a more reserved person (like my wife), I would undoubtedly mark the occasion by celebrating quietly with a small group of friends. But I am not like my wife, and I want a big fuck-off party, so a big fuck-off party I shall have.

(I will pause here to apologise to my mother and mother-in-law, for this being the sweariest opening to my blog ever).

Anyway, I won’t mention the venue for my party, because some of you are just about unhinged enough to try and gatecrash, but suffice to say it’s close enough to where I live that I can walk home – unlike the vast majority of those attending (still, it’s my big day, not theirs, so tough).

Most of the arrangements are thankfully now in hand, such as the catering, band and disco, but a couple of weeks ago, I arranged to nip back to the venue to meet with the bar manager, in order that we could discuss the drinks available on the night.

I understand this may seem overly fastidious, but my reasons were as follows:

So, having arranged to call in a couple of weeks ago, I prepared myself for a ‘firm’ discussion with the bar manager, about precisely what I wanted for my party.

Now, I should point out at this stage that, despite my job (I’m a solicitor, in case you are new to my blog) I detest confrontation, particularly when it is face-to-face, and I usually back down in the majority of disputes (I suspect this ability to surrender very easily is something I have picked up over fifteen years of marriage, rather than any French heritage I may ultimately discover in my distant lineage).

This is not to say I expected the bar manager to be confrontational in the slightest, but I was determined to leave the venue with what I wanted in place, and, as I opened the door, I had convinced myself that I would not be taking no for an answer.

This boldness lasted around three minutes.

The reason, I am ashamed to admit, is that I was instantly intimidated by the bar manager when I met him. Not because he was taller than me (I’m 6’3”), or because he was wider than me (which he was, but only marginally, and he was by no means threatening in a physical sense), nor was he aggressive in any way whatsoever – in fact, he was perfectly pleasant throughout our meeting.

No, the reason I was instantly on edge when I met him, was because he had a strong South African accent, and for whatever reason, rightly or wrongly, this is not an accent I associate with ‘friendly discussion’ (in much the same way I struggle to associate certain regional accents with any signs of intelligence*)

*and, if you think I’m telling you which regional accent that is, thereby alienating a chunk of my readership in Birmingham, you can guess again (that was a joke, obviously, as I happen to love Birmingham and it’s people very much. My maternal grandmother originated from there, so I felt it was the one part of the UK I could pretend to take the piss out of, without repercussion or fear of anyone taking me seriously. Unlike those fucking Londoners, who can never take a joke).

As soon as I met the bar manager, he greeted me warmly and offered me a beer on the house, which was extremely kind of him, but I still felt nervous declining in case he took it personally and snapped my neck (see how irrational I was being?). Thankfully, any fears of neck-snapping were quickly allayed, as it transpired the beers on offer behind the bar had changed since I was last in, with both the ale and lager being far more to my liking.

He then said he had received my e-mail about the Jagermeister, and had agreed to get two bottles in for the party, so long as we did our best to drink it all on the night, as they would struggle to sell it to their usual clientele afterwards. I reassured him this was not a problem, although I suspect I visibly squirmed when he joked about some people actually mixing it with Red Bull and making something called a ‘Jagerbomb’. Hopefully he will have forgotten me describing such drinkers as ‘idiots’, when it comes to me ordering a tray of Jagerbombs in just a couple of weeks. 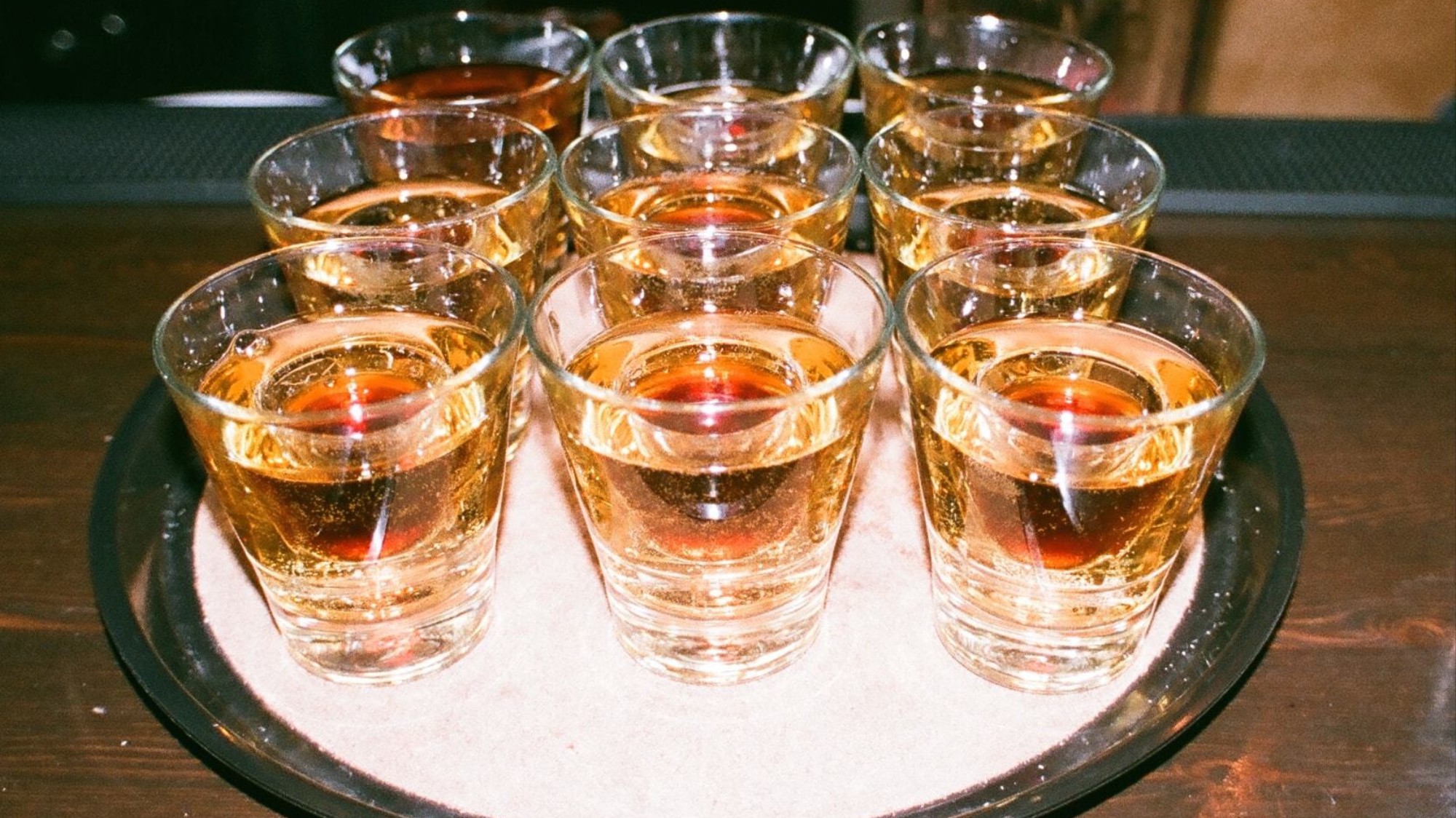 Having also re-assured me that he had more than enough wine and Prosecco for the party, he then turned to the bottles of spirits nestled gently in the optics behind the bar, and this is where everything took a distinctly frightening turn. You see, having worked his way through the gin and whiskey/whisky brands on offer, whereupon I hesitantly revealed I don’t drink either, I then made the mistake of admitting my tipple of choice (other than beer and red wine), is actually rum.

At this point, he became visibly excited, and said in his South African accent (which, when I have told this story in person recently, I have impersonated, and I have to say I fucking nailed it every time) “well, my friend, you must try some of this!”

Then, collecting a series of shot glasses from under the bar, he proceeded to pour me a measure of every single rum on offer (there were five), and insisted I down them all one after the other.

It was only after I had consumed four of these shots, and politely declined the fifth (because it was made with coffee, and I hate coffee), he informed me that one of the varieties was made with hemp (which, if you didn’t already know – and you shouldn’t, because drugs are bad, hmmmkay? – is essentially a strain of the cannabis plant).

Now, it might have been the five shots I had just downed in a matter of minutes (because he offered me a fifth measure of Captain Morgan’s while explaining about the hemp rum), but I swear I noticed an even stronger twinkle in his eye at this point, and I began to fear that I was about to collapse, only to wake up a few hours later in a bathtub of ice, with one of my vital organs missing.

My unease was not helped by the fact he then asked me – again in his accent, which again I nail every time I impersonate it – “tell me, my friend, have you ever had a Springbok?”

I’ll admit this question took me by surprise a little, but having pondered my answer for far longer than was comfortable for either of us (I later blamed the hallucinogenic rum coursing through my blood stream when recounting the tale to my wife), I opted for the rather tame “no?”, offered in such a way as to hopefully infer I was nervous about trying a Springbok now (as that was surely where this scenario was headed). In fairness, for all I knew, ‘Springbok’ was what he called his penis.

Sure enough, he then insisted I have my first ever ‘Springbok’, and I only wish I had paid attention to what went into it, so I can be sure to never mix the same concoction ever again by mistake. What I can be confident of, is that it contained a cream liqueur – which I suspect was Bailey’s – and something green, which, if I did not know better, was probably Crème de menthe.

Hold on, I could probably Google this and find out for sure….

Yep, close enough. Apparently, the traditional recipe contains Amarula (which appears to be a South African Bailey’s alternative), with, as suspected, Crème de menthe. And the evil little fuckers look like this:

Anyway, to cut a long story (with an astonishingly-accurate impersonation) short, the bar for my party should now be more than satisfactory, the bar manager is a lovely bloke (and I am not just saying that because I firmly believe he has killed before, and could easily kill again), and I returned home within half an hour to find that I could no longer feel anything below the waist, and the vision in my left eye was distinctly blurry.

Bodes well for my party, doesn’t it?