“It’s Christmas time, there’s no every need to be afraid.”

Happy New Year, everyone. I hope you all had a great Christmas, with much love and laughter.

Before the joyous memories of yet another festive period fade into the utterly bleak shitness that is January, and while fans of my Facebook page might have seen some of what follows already, here are my fifteen festive highlights from Christmas 2019:

Like many couples who have young children, every year we face the challenge of dividing our time between visiting my family in Cheshire, and my wife’s family in Norfolk. What we tend to do is alternate ‘Actual Christmas’, so the boys get to spend 25th December with my family one year, then my wife’s family the next.

This year, it was the turn of the latter, which meant we celebrated ‘Northern Christmas’ on Sunday 22nd December (it’s exactly the same as Actual Christmas, only we have roast whippet for dinner instead of turkey*) and, thankfully – despite his hectic schedule – we managed to persuade Father Christmas to do a dummy-run to my mum’s house a few days before the main event.

As a result, the boys eagerly placed their sacks in front of the fireplace before going to bed on 21st December, and awoke the next morning to bundles of presents. Well done, FC, you fucking nailed it, mate.

Just look at those little faces. 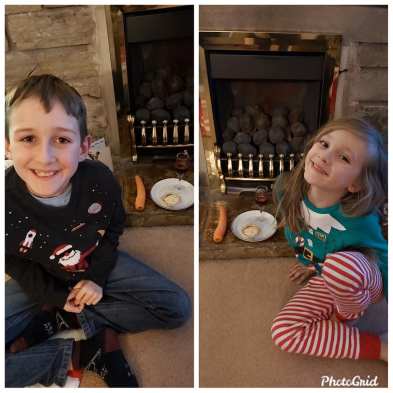 While Kanye was having his well-earned clean (I like to name my cars, and my current motor is ‘Kanye the Kuga’, because he’s big and angry-looking, like his namesake), Isaac decided to put on the ‘Schmebulock’ mask he had received from Father Christmas the day before. For those of you who have never watched Gravity Falls (which, for a kids’ show, is actually very watchable), Schmebulock is a gnome who vomits rainbows. Obvs. 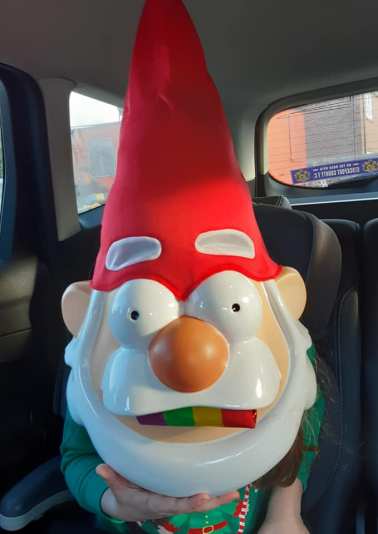 Unfortunately, it seems the delightful Albanian lady who was tasked with cleaning the insides of Kanye’s doors has never seen Gravity Falls (I suspect the humour doesn’t translate well), and when she opened Isaac’s door to be greeted by a goblin puking multi-coloured fabric, it would be safe to say she damn-near shit herself.

Hilariously, however, once she had composed herself, she mistakenly assumed he was dressed as Father Christmas, and very sweetly asked in broken English: ‘Do you have a present for me, Santa?’

To which Isaac rudely growled ‘I am NOT Santa! I am Schmebulock, the rainbow-vomiting gnome!’

In other news, I need to find another car wash from now on.

Continuing with my youngest son, and his penchant for being a bit of a twat (although, so help me, how little material would I have without him?), when returning from the car wash, Ollie suddenly howled in pain, after which the following conversation ensued between us:

“Isaac, why did you punch Ollie?”

“What colour was it?”

When you arrive at the in-laws, and there’s a large, stuffed giraffe in the downstairs bathroom (wearing shades)… 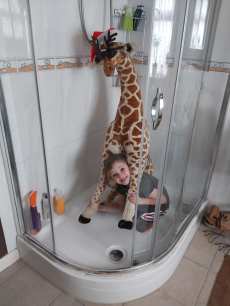 … not to mention a strategically placed Christmas decoration, which is only ever likely to injure (blind) the one person in the family who is over 6’ tall:

I didn’t take this personally.

6. While Shepherds Groped Their Flocks

At (Actual) Christmas Eve Mass, my wife wanted to get a nice photo of the boys in front of the church nativity scene. Naturally, Ollie tried to smile sweetly, while Isaac gravitated at alarming speed towards the nearest ovine rectum:

On Christmas morning, I braved the cold to take part in a special festive Norwich parkrun. And, not only did they smash the attendance record for Norwich (over 1,350 runners, compared to last year’s 800-odd), but it was officially recognised as the second-highest attendance at a UK parkrun ever.

Needless to say, the date/occasion brought out the very weirdest in people (even aside from the fact they were voluntarily running on Christmas morning, and mostly live in and around Norwich): 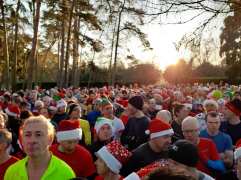 Isaac is astonishingly naive about where food and drink originates from:

“Mummy, what animal does blackcurrant come from? It is a pig?”

9. Making Your Mind Up

When your Mother-in-Law asks if anyone would like some Bucks Fizz, you make a joke about her whipping her skirt off, but she doesn’t get the Eurovision reference and thinks you’re asking her to get undressed. 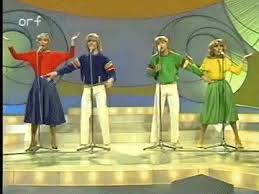 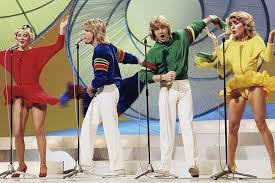 Nothing funny here, but it was certainly a highlight.

Over Christmas, Ollie accompanied my in-laws onto the cold streets of Norwich to help feed the homeless. He enjoyed making hot drinks and doing something worthwhile, but (as hoped), it really drummed home how unfortunate some people are, how lonely they can be at Christmas, and how lucky he is to have a family and home around him.

We were immensely proud of him.

I suspect my in-laws may not thank me for the following two paragraphs, but they really made me laugh.

Firstly, at one point over Christmas, my mother-in-law (who I love dearly, and I’m not only saying that because she will read this), clearly intended to describe someone as either ‘mardy’, or ‘whingy’, only she got mixed up and called them a ‘minge’.

Meanwhile, I don’t know whether I missed my father-in-law informing everyone that they had both been woken in the early hours by four of their six grandchildren wriggling around the bed, but the first I knew was him saying: ‘Honestly, I was like a maggot when I got up this morning.’

Well, we’ve all been there.

I suspect Isaac ever attending University may well be a pipe dream (and I don’t say that purely on the basis he thinks blackcurrants come from pigs, although it doesn’t help his case), but on a family walk between Christmas and New Year, we happened to pass the University of East Anglia, and he asked me what the funny-shaped building was.

“What does Daddy do for a job?”

“Close enough. And what does Mummy teach?”

I then asked Isaac what he might study if he went to university, and he looked confused. In an attempt to help him, I queried what his favourite subject is at school.

I wouldn’t mind, but he never eats anything.

Once my brother-in-law and his family arrived after Actual Christmas, there was a day when all six grandchildren on my wife’s side were together, and they began playing ‘Mums and Dads’ upstairs. Being the two eldest, Ollie and his first girl cousin were Dad and Mum (Isaac later informed me that Ollie was called ‘Bob’ for some reason), and the others took varying roles for the rest of the family.

Naturally, not being one to conform to usual stereotypes, Isaac decided he did not want to play a child, and instead dressed as the family dog: 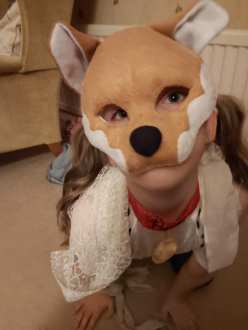 After a while, ‘Dad’ was reading a bedtime story to their daughter (Grandchild #5), and proudly exclaimed she had ‘gone to sleep’, which panicked me as I was nearby and was under the impression a mid-afternoon nap might, for want of a better phrase, ‘fuck with bedtime’, so I asked Ollie to check his cousin hadn’t actually nodded off. Isaac then took it upon himself to explain:

“No, Daddy, it’s just a game! Ollie is the Dad, then there’s Mum, the children and their pet dog!”

Then, as if I needed clarification – bearing in mind his outfit – he leaned toward me and whispered: “I’m the dog.”

On New Year’s Eve, we had a family outing to the beach.

On arrival, Ollie sat himself down in the cold sand to write some emo prose about the crashing waves, while Isaac busied himself ensuring not an inch of his body remained sand-free by the end of the day.

Eventually, the boys did play together and, along with one of their cousins, built an impressive sand fortress – complete with moat.

Of course, having spent an hour or so playing ‘normally’, Isaac then decided to create a separate ‘seaweed castle’ by himself.

And, when Ollie suggested they could use that seaweed in the moat, because ‘it will look like water’, Isaac – in typical fashion – responded with: ‘no, it’ll look like seaweed’. 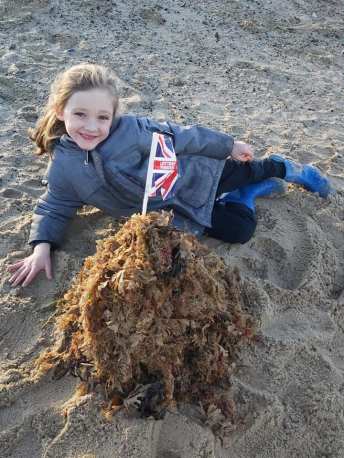 15. Addressing the Elephant in the Photo

Finally, to end the day (and, indeed, the year), we took the children to a nearby park, where my sister-in-law noticed Isaac and his cousin playing beautifully together on the see-saw. However, when she tried to take a photo of the moment, I ruined it by getting myself stuck in a springy-elephant in the background.

Well, that was Christmas 2019 in the Middle-Raged Dad household.