Last week, I started telling you about our recent glamping weekend in the New Forest, which my wife had won as a runners-up prize in a Kinder egg competition she had entered several months earlier (the main prize was a family holiday to Disneyland, if that helps explain her momentary lapse of sanity).

At the end of Part I, we had just retired to bed on our first night, sleeping in a dirty looking canvas lodge deep into the woods, where no one would hear our screams if we happened to be butchered during the night by our rather unusual hosts. 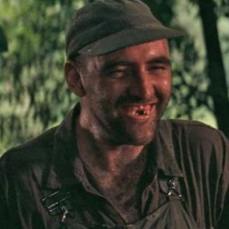 No, wait, that’s slightly unfair. They actually seemed quite pleasant, it’s just that they clearly viewed us as nothing more than ‘city folk’ (despite the fact we live in a market town in Cheshire), who were only glamping because we had won the weekend in a competition, and would never normally consider a rural retreat for a weekend away.

How dare they accurately sum us up within five minutes of our arrival…..

If truth be told, I actually slept quite well last night – possibly fueled by the bottle of red wine I consumed before going to bed – although I did have a dream about being trapped in a forest during the zombie apocalypse (which doesn’t exactly require a sleep expert to decipher), so I evidently still have reservations about our surroundings – and our hosts.

The boys, however, should be more worried about me attacking them, since – despite sleeping soundly enough – they have apparently woken up with the sole intention of clawing the living shit out of each other, and if their behaviour doesn’t improve soon, it will be Daddy who loses it with something sharp.

Actually, thinking about it, there are definite parallels to The Shining here. An aspiring writer gets isolated from civilisation, with only his family for company, and slowly loses his mind… before chasing them around with an axe. Hmmm, food for thought.

Speaking of food, I thought I had come prepared for this trip, by bringing two multi-packs of Kellogg’s Variety Cereal (to cover our three breakfasts here), but since Isaac has apparently made it his mission to devour at least half the boxes on the first morning, I suspect we will run out well before then. Assuming we survive long enough.

My wife is pissed off, too, as she was bitten on her leg during the night and, in fairness, it does look very sore and itchy. I seem to have avoided any bites, touch wood (hmmm, I wonder if there’s any wood around here…?), so I have had to disguise my smugness/relief in favour of appearing sympathetic instead. I think I’m getting away with it.

Over breakfast, during a brief respite from attacking Ollie, Isaac started screaming because he had heard us talking about being bitten (and particularly about the blood-sucking arachnids we have been warned are in the area), and he had spotted a bug feasting on his leg. Fortunately, upon closer inspection, it was only a Coco Pop.

Time to get out and about.

We had no real plans today, other than our organised archery session at the activity centre adjacent to the farm; and, since Meghan at the travel company had not booked this until 4pm, we decided to make the most of the sunshine by heading to the beach in Bournemouth.

When we arrived, at the slightly less crowded ‘Alum Chine’ (about ten minutes to the East of the main promenade), I immediately set up camp on an empty bench just before the beach itself. I argued that this was purely to keep our belongings safely away from the sand, but my wife knew that the real reason was to keep me safely away from the sand, because I loathe the stuff.

So, having bought myself a cup of tea from the nearby kiosk, I settled in to enjoy the sunshine, not to mention some quality people-watching. It was around this point that I realised I had turned into my Nan, but that was a price I was willing to pay, if it meant avoiding getting my feet and legs (and, heaven forbid, anything more ‘intimate’) caked in sand *shudders*. Still, it certainly looked like a nice beach, from the relative safety of my bench: 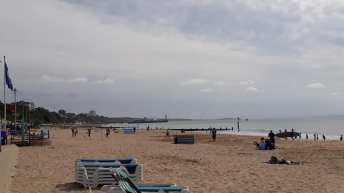 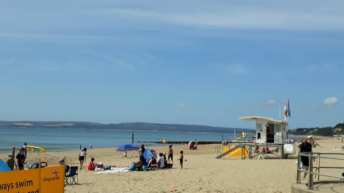 The first people I noticed, were a couple a little younger than us, who looked very much like ‘beach types’, which meant I instantly disliked them. They were athletic, tanned, and thoroughly fucking smug with themselves. Unfortunately, just as I was glaring at them, willing either (or both) to trip and fall on their face, the lady bent over to take her shorts off – revealing a skimpy bikini underneath – and I had to immediately avert my eyes, before I was accused of being some kind of deviant beach pervert. Again.

Unfortunately, my instinctive reaction was to look in the opposite direction, but this meant my gaze was instantly fixed on two elderly women to my right, who were also in bikinis – and rubbing sun lotion into each other’s leathery skin. Since this view was equally inappropriate (albeit for entirely different reasons), I found myself not knowing which way to look, and briefly panicked – like I was watching a high-speed tennis match – before fumbling for my phone to give me something else to focus on. And, before you think I could/should have been watching my family playing joyfully in the sand, they were positioned directly behind the attractive lady’s bottom, and I didn’t want to risk it.

Soon after, I encountered the only visitor to Alum Chine who was ‘enjoying’ the beach even less than me, as a family arrived next to my little bench with a teenage daughter in full ‘goth’ attire – complete with torn black jeans, black jumper, and black trench coat. By this point it was nearly midday, and glorious weather, so you can imagine how sweaty and miserable she looked (even though goths often look miserable anyway). I nearly introduced myself, so we could bond over loud angry music, and our mutual dislike of beaches, but I thought that might seem a bit weird, so I went back to watching the two pensioners rubbing sun lotion onto each other instead (it might have been the heat making me delirious, but I was starting to find it rather erotic).

After a nice day in Bournemouth (I was going to say ‘lovely’, but I’ve downgraded it as a result of being forced to scrape wet sand off Ollie’s feet and legs), we returned back to the farm in time for our archery session.

Having followed the signs even deeper into the forest, to the ‘outdoor activity centre’ (which was, in reality, just a dreadlocked man in a gazebo), we encountered a dozen other people, who were also there for an early-evening of fun with dangerously sharp stuff – since there was not only archery on offer, but also crossbows and axe-throwing. Fortunately, Isaac was too young to partake in the latter two activities, because I have no doubt someone (most likely me) would have lost a limb.

After a brief introduction, and some safety tips (‘don’t point the bow at your Daddy’s face, Isaac’), it would be fair to say I was the finest archer in our family – no surprises there, I’m a natural athlete, just fucking look at me – but Isaac was undoubtedly next in line. In fairness, that was mostly because my wife was stood helping him load his bow each time rather than taking part herself, but also because Ollie was shite at it, and ended up crying as a result.

The situation wasn’t helped by ‘Dreadlock Dave’ (I think his actual name might have been Josh, but that doesn’t work as well), deciding to spice things up a bit for our boys, by adding some small balloons to the bullseye to see if either of them could pop one. Unsurprisingly, Isaac popped both within minutes, and Ollie sulked for the next hour.

After our archery session, we were told that the owners of the farm would be lighting the outdoor ‘pizza oven’ next to our lodge, and anyone could use it to make their own pizza from the ingredients in the ‘honesty shop’ on site (for those unaccustomed with the concept of an ‘honesty shop’, you essentially take whatever you want, then settle up at the end of your stay).

Now, the last thing I wanted to do while on holiday was cook, let alone stand next to a hot kiln with other (proper) glampers, making polite conversation about how lovely it is to be sleeping outdoors with every insect known to man (spoiler: it’s really not); but it was the only thing guaranteed to stop Ollie from sulking, so I reluctantly agreed. Sadly, the limited supplies in the honesty shop restricted the boys to margherita pizza, and even though Isaac set about making ‘the cheesiest pizza ever seen’, he later complained that it was ‘too cheesy’.

Meanwhile, Ollie was either delighted with his dinner, or he knew full well I would push it into his stupid sulky face if he didn’t eat it all, because he kept saying how delicious it was.

“Daddy, did you know, when Italian people really enjoy their food, they put their fingers to their lips like this…..

“Then you’ve been watching ladies underwear commercials, pal, because ‘Bravissimo’ make bras. The word you’re after is Bellissimo.”

Since neither my wife nor I fancied cremated pizza for dinner, once the boys were in bed I drove into Fordingbridge to pick up a Chinese takeaway, and although I couldn’t quite manage all the crispy chilli beef I ordered, it went particularly well with the beers – followed by more red wine – I had purchased to accompany the meal.

Then, once dinner was finished, and I felt too tired/inebriated to wash up, I left the takeaway containers by the sink, and headed to bed.

Little did I know, that decision would come back to haunt me the following morning….