I’m going to pre-empt this week’s entry with a warning that it is admittedly about football – specifically my team, Stockport County – but I suspect (hope) those of you who don’t follow or like football will still enjoy it.

My main reasons for that assumption are as follows:

Besides, Isaac has had an uncharacteristically quiet week (by his standards), and not much else has happened in my life, so unless you want to read a blog entry about a group of friends baking a cake (which was, admittedly, huge and brightly coloured – see below), or me taking Isaac swimming last Sunday, then it’s tough shit, I’m afraid.

Anyway, I shall keep the football element of this week’s entry to a minimum, by providing the following whistle-stop tour of the last decade or so supporting Stockport County:

Now, because our demise into non-league football had become inevitable by Easter 2011, and because I was determined Ollie’s first County match would not be against some ‘poxy non-league side’ (I didn’t realise at the time how bad things were really going to get, and how good some of the sides down there are), his first visit to Edgeley Park took place on Easter Monday (25th April) 2011 – when he was just eleven months old.

Obviously I didn’t expect Ollie to understand what was going on  at the time, but ever since I had found out I was going to be a father, I had looked forward to taking my son or daughter to Edgeley Park for the very first time; I just never expected it to be the match which effectively (if not mathematically), sealed our fate, and relegated us out of the league for the first time in more than a century. To say I had mixed emotions that day, would be a massive fucking understatement.

In truth, it took Ollie a few seasons before he actually started to enjoy coming to County with me (a rucksack filled with snacks often helped pass the time for him); but then, prior to the start of the 2016-17 campaign, I purchased season tickets for the two of us, and we have been in the same seats ever since.

As his love for football grew, I started to worry that he might be tempted to switch allegiances to one of County’s more successful neighbours down the road in Manchester, but I have thankfully never had to carry out my threat of chucking him out of the house on his arse, because he has not once shown any interest in supporting either Uni*ed or C*ty (I may swear occasionally in my blog, but there’s no fucking way I’m typing either of their names in full). Ollie has remained a proud ‘Hatter’ ever since.

It would be fair to say County’s fortunes over the period of Ollie’s support have ranged from ‘disappointing’ to ‘utterly shit’ (and a wide spectrum of brown shades in between), yet not once has his allegiance faltered. It would have been so easy for him to succumb to the temptation of supporting a more successful team, as so many of his friends at school do, but he has always proudly boasted about his love for County, often in the face of derision and laughter. In fact, one of my proudest moments as a father, is when he encountered a young Manchester Uni*ed fan on a visit to the National Football Museum when he was five, and explained to them why their life choices were so regrettable.

As a result, when County won automatic promotion to the dizzy heights of the fifth tier of English football last Saturday afternoon, I had decided to reward Ollie for his loyalty by taking him to the end of season awards dinner at Edgeley Park.

I have been to this event a few times myself over the years, and have usually ended up quite drunk (I once – rather embarrassingly – drew up a contract on a napkin, to try and ‘sign’ a County striker for our five-a-side team, explaining that I was a ‘proper lawyer’, and would hunt him down like a dog if he didn’t show up for the tournament we had entered the following day), but I had previously agreed to take Ollie once he was a little older, and this seemed the perfect season to make good on my promise.

So, with promotion to the National League secured shortly before 5pm last Saturday, Ollie and I donned some smart clothes, and caught a train from Sandbach to Stockport. To say he was excited would be an understatement.

Fortunately, the fancy two-course meal was something he was willing to try (even though I ended up devouring his dessert, as well as my own, because ‘there’s some red stuff on it’ – a berry compote), and since we had a lazy Sunday planned the following day, the prospect of him getting to bed well after midnight thankfully wasn’t too much of an issue.

Which was for the best, because County’s final match of the season had been away at Nuneaton, and because the result meant we were crowned champions, the players had to wait to be awarded the trophy in front of our 3,500 traveling fans, meaning they were delayed heading back to Stockport. So late, in fact, that Ollie and I were the sole occupants of Table 17 for at least an hour, and dinner wasn’t served until 9.45pm, by which point I honestly thought Ollie was going to pass out from hunger. 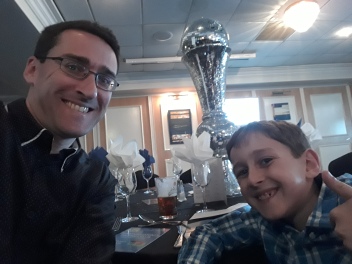 The consequence of dinner being so late, was that the awards themselves went on until nearly 11pm, and I knew we had to leave Edgeley Park soon after 11.30pm to catch our final train home, which meant Ollie had very little time to meet the players for autographs.

Thankfully, he had already met many of the squad last season when he was mascot for the day, and he had memorised a list of the signatures he still needed in his autograph book, so we focused on those players and managed to collect all but a couple. 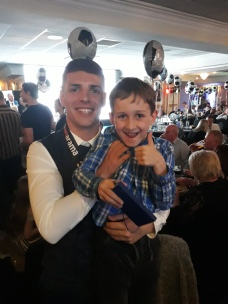 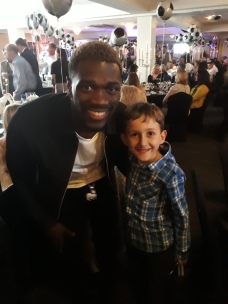 Better still, as we were due to leave, we spotted County’s Manager, Jim Gannon, holding the champions trophy County had been presented at Nuneaton a few hours earlier, and we managed to nip in for a very quick photograph. It just so happened to be one of the best photographs I have ever taken: 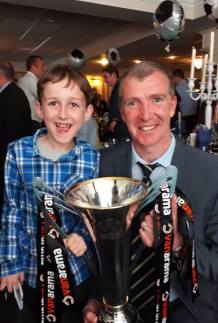 Then it really was time to go, but thankfully – apart from a few players we hadn’t been able to catch for signatures – the night was winding down anyway, and Ollie was utterly euphoric (if a little knackered). So much so, as we got on our last train home to Sandbach shortly after midnight, he turned to me and said “This is the best night of my life! It doesn’t get any better than this!”

And, as I explained on my Facebook page last weekend, those few words made it one of the best nights of my life too.

Thanks for reading, and I promise next week’s entry won’t be about football x

One thought on “The Blog and White Army”