Last weekend, we decided to spend Sunday as a family, and have a ‘nice day out’.

Of course, with our boys, having a nice day out is unlikely at best, but my wife and I nevertheless persevere, in the hope that one day we will take them somewhere for a treat and they won’t be ungrateful little shits about it.

Also, I say ‘we’ decided on a family day out, but this was very much my wife’s suggestion, for the following reasons:

Naturally, I couldn’t argue with any of her points, because not only were they all valid, but after nearly fifteen years of marriage I know better than to argue with her at all.

So, having carefully researched our options (while I dozed on the sofa and periodically nodded at what I assumed might be appropriate points), my wife decided we should visit Tatton Park, as it’s less than half an hour from us, and they seemed to have a lot of Easter activities organised over the weekend.

When we arrived soon after 10am, we firstly headed towards the gardens, where I was persuaded to fork out £33 for a ‘Totally Tatton Ticket’, granting us access to the three main ‘attractions’ – Gardens, Mansion and Farm (I use the term ‘attractions’ loosely, because my personal view is that Nemesis at Alton Towers is an attraction, whereas gardens are merely ‘somewhere the elderly visit’; however my wife is a history teacher, so a 19th Century manor is like history-porn to her).

Having handed over my bank card, while muttering something under my breath about it being ‘so fucking expensive I can’t even use contactless’ (putting my pin in these days seems sooooo last decade), we then entered the gardens themselves, where we were informed there was an ‘Easter Hunt’ going on. Better still, the hunt involved collecting a series of clues (which Ollie loves), by searching for hidden fairy doors (which Isaac loves), and the prize for completing the trail was a bag of chocolate each (which they both love). 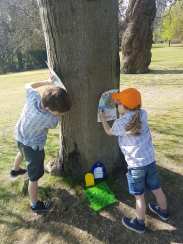 Afterwards, the boys wanted to climb trees in the woods, which always fills me with dread (because they have inherited my clumsiness), so it was bound to end in tears. Sure enough, while Ollie busied himself making a ‘lookout’ roughly six inches off the ground (honestly, he was still below my nipple-height, and I’m not that tall), Isaac opted to scale an entirely smooth part of the tree, with no branches to cling on to. See exhibit A: 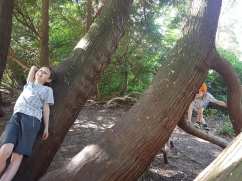 Sure enough, barely seconds after that photo was taken, Isaac did indeed slip, and smacked his head on the floor with such a bump, I honestly felt sick and started working out which was the nearest hospital. Fortunately, the injury wasn’t that bad, because although he immediately screamed bloody murder (which was a good sign, because it showed he didn’t have concussion), it transpired I had underestimated both (a) his protective pony-tail; and (b), the healing power of scoffing the entire bag of Smarties he had just won for completing the trail. Within minutes, he was fine again (albeit with a face covered in tear stains and chocolate smears).

Ollie, on the other hand, was by this point sobbing, because I had shouted at him. I tried to calmly explain that Daddy had only shouted because we thought Isaac might be paralysed and, at that precise moment in time, no, I didn’t give a flying fuck about a building he had spotted that looked like something out of Scooby Doo, but that did nothing to placate him, and he continued howling for far longer than Isaac had. And, therein lies a summary of our kids: one is a bit of a wimp, while the other can take a direct – and potentially fatal – blow to the noggin, but recover within a matter of minutes.

When Ollie did finally stop crying, and following a further argument between us over the best route out of the gardens (which, rather annoyingly, he won – meaning I never got to perform the victory dance I had carefully choreographed), we stopped off for a quick picnic lunch, before making our way to Tatton Hall itself.

Once inside the Grade-I listed building, we realised there was another Easter hunt going on (with a further bag of Smarties on offer), only this time we had to walk around the house spotting clues to famous fairy tales. At this point, the ‘princess’ we had passed on the way in (a lady in a gold dress and tiara, who I had thought at the time was somewhat over-dressed, particularly considering most of the men around us were shirtless) suddenly made sense, and Isaac decided it was ‘Belle’ from Beauty and the Beast.

My wife therefore suggested we search for ‘the Beast’ (although didn’t appreciate me immediately pointing to my crotch and shouting ‘found it!’), and we discovered him in the next room. Both boys then surprised me, since the previously timid Isaac immediately went to hug the Beast for a photo, while Ollie pulled out a semi-decent joke, by wishing him ‘Happy Beaster’. Ok, it’s never going to win best joke at the Edinburgh Fringe, but for Ollie it was a comedic triumph (I honestly thought the elderly lady next to us was going to wet herself, although that might have been true regardless).

As the hunt continued, we ended up downstairs in the servants’ quarters, where my wife went into history mode, educating our boys about the 19th Century class system. It was at this point she spotted a costume box, where kids could dress up like the impoverished youth of that period.

Now, if there is one thing I (apparently) find irresistible, it is the opportunity to dress like a Victorian maid, because that was the first costume I instinctively grabbed – shoving Isaac out of the way in the process. Please understand, it’s not that I enjoy dressing in women’s clothes per se, but for some reason I was drawn to the maid’s outfit over that of, say, the chimney sweep. I can’t explain it, but it’s not the first time this has happened (in the second photo below, taken a few years ago, we didn’t even have our kids with us), so it is dangerously close to becoming a weird fetish. 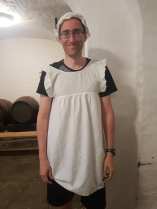 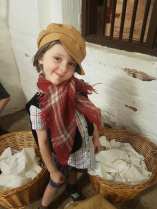 Having successfully completed the hunt, the boys were awarded their chocolate prize by, quite frankly, the oldest fairy godmother I have ever seen, and we emerged from the adumbral (thank you, online thesaurus) Tatton Hall corridors, back into the Easter sunshine.

As luck would have it, we overheard someone say the princess (who, it transpired, was Cinderella, not Belle), was posing for photographs nearby, so Isaac insisted we head straight there, and we found her alongside one of the ugly sisters – who made my earlier attempt at drag look positively sexy.

When Isaac reached the front of the queue, my wife decided to avoid any awkward misunderstandings by introducing him as a ‘prince meeting a princess’. To her credit, Cinders got the hint, and even went so far as to crouch down to tell Isaac that his hair was fantastic, that more boys should have long hair, and he should never, ever, cut it.  This made his day. Bless her.

From there, we headed to the farm, where we were informed ‘story time’ had just started in one of the buildings. Having dashed over, we discovered a lady reading ‘The Gingerbread Man’ to a group of children, but space was limited, so I was left on one side of the room with a strange family (I’m sure they were perfectly pleasant, but they were strangers to me), while my wife and boys sat opposite.

As if this weren’t weird enough, another couple then arrived and squeezed in through the door next to me, meaning I had to stand/crouch immediately behind my newly adopted family, while the latest arrivals blocked my exit (I had been planning to make a quiet escape when no one was looking).

Worse, they were clearly not my kind of people, as they were both extremely aware of how good-looking they thought they were (he had his ‘guns’ out in a vest-top, while she was wearing a long dress more suited to Marbella than a farm, together with enough fake tan to drown a fucking horse, and the sort of ludicrously-long false eyelashes that would have looked better on said horse before its mahogany-coloured demise).

In fact, she appeared to be the only person less-impressed to be there than me, whereas at least ‘muscles’ attempted a few animal noises at the appropriate parts of the story (when, incidentally, Isaac nailed his pig impression, and I don’t think he’s ever made me prouder – which says a lot about his achievements to date).

To end the day, because the boys had achieved a cumulative total of seventeen minutes where they hadn’t been completely dreadful, we decided to go for dinner at a nearby pub as a final treat (read:  Daddy’s reward for not killing anyone).

Here, Ollie informed us that Easter Sunday is his ‘third favourite day of the year’ (after Christmas Day and his birthday), because ‘you get to eat chocolate all the time, even for breakfast in bed’. I had to then point out that, actually, he wasn’t allowed to eat chocolate in bed, because there was no way Daddy would be sniffing any brown stains on his sheets to check if they were Cadbury’s or shit.

And, while we’re on the subject of shit, Isaac yet again decided he needed the toilet just as our food arrived (it has happened far too many times to be mere coincidence), and since he was very much anti-Daddy by this point, it fell to my wife to accompany him to the bathroom.

When they returned several minutes later, I asked if it had been a successful visit (Isaac encounters a lot of false alarms), and my wife’s response of ‘I can’t un-see what just happened’ told me everything I needed to know. I certainly didn’t need Isaac to loudly announce to the entire pub:

“My poo was so big, the water splashed my bum!”