Over the past year or so, I have genuinely started to question whether I need to see an anger management therapist.

The thing is, expressing one’s anger is sometimes better than bottling it up (unless you happen to be American and heavily armed), and if I were a more placid and laid-back individual, then I suspect this blog wouldn’t be anywhere near as popular as it is – and it’s not very popular. Plus, I’d have to change the name to something like ‘The Tranquil Musings of a Middle-Aged Father who is Ultimately Content with His Life’ and, let’s be honest, that would be shit. But I do feel that perhaps I shouldn’t become quite so angry over what are, essentially, trivial annoyances at worst.

For example, everyone is entitled to get mad when something genuinely bad happens in their life, and I cannot be the only person to have sworn a little whilst driving (even though I would never confront another motorist, or engage in actual road rage, as I find a simple hand gesture insinuating that the offending BMW driver enjoys pleasuring himself often suffices), but here are a few recent examples of occasions when my pent-up fury has arguably reached excessive levels:

1. Every parent knows only-too-well how painful it is to stand on a piece of Lego with bare feet (I recently asked my wife to compare the pain to childbirth, and she just glared at me, so I think that speaks volumes and we can all draw our own conclusions from her silence), but it is hardly the piece of plastic’s fault.

With that in mind, and assuming it would have been considered poor taste to direct the resulting vitriolic outburst at whichever child was responsible for leaving the Lego in the precise spot where Daddy’s exposed foot was likely to be placed, I found I had no choice other than to scream ‘fucking motherfucker’ at the offending piece of plastic – which, in hindsight, was somewhat extreme.

Look, I’m not proud of it, and I still maintain this was preferable to slinging the same abuse at the boys; but I started to question whether, in some weird way, it might have been better to refrain from calling anyone/anything a fucking motherfucker. Did I overreact? Perhaps.

2. On my commute home recently (which is so often the cause of many angry expletives, because I seemingly share my journey with a group of lobotomised morons), I became irrationally – and, I accept, completely disproportionately – incensed by the rear end of a Land Rover Discovery: 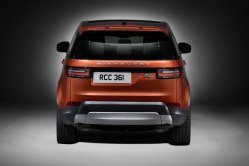 The reason for my rage? Well, that would be the slight asymmetry. I know it’s irrational, but I can handle a registration plate being completely to one side, such as in former Discovery models like this one:

However, to have the registration plate marginally off-centre is utterly fucking pointless. I even pointed this out to my wife, and she just glared at me again, which I now know is her way of agreeing with me entirely.

3. Even more recently (read: within the last half an hour), I pondered over an appropriate title for this week’s entry, and having settled on Oasis’ song, I honestly switched between ‘Don’t Blog Back In Anger’ and ‘Don’t Look Blog In Anger’ so many times, I wanted to physically hurt myself.

The thing is, ‘Don’t Blog Back in Anger’ definitely works better as a phrase, but then I’m replacing the word ‘Look’ rather than the word ‘Back’, and the latter begins with a ‘B’. This goes against everything I stand for, because I have always tried to substitute the word Blog for something similar in whichever phrase or title I have settled on for that week’s entry (or, even better, something that actually rhymes with blog – but, I’ll be honest, I’m running out of those), and it got me really quite mad.

In fact, if my work colleague had not been sat opposite me throughout the lunch-break I started writing this week’s entry, I genuinely fear I might have thrown the laptop across the room to make myself feel better. Can you imagine if I lost my job, because I destroyed work property over a fucking blog title?

Therein lies my problem. I personally think it’s good to get angry and blow off some steam from time-to-time, and it certainly presents me with some of my better writing material, but I am teetering on the precipice of a full breakdown now, over something so trivial even I struggle to justify getting irate about it. It’s a good job I’m not American.

And, while we’re on the subject (because this is genuinely helping me to calm down, so thanks for the free therapy), why, when someone does offload their burdens, is it referred to as ‘getting something off their chest’, or – even worse – ‘venting their spleen’?

I assume the former is something to do with the impact it has on your blood pressure, and the obvious connections between stress, anger, and heart attacks (which, bearing in mind this week saw the anniversary of my collapse at the Whitchurch 10k last year, when for a good few hours the medical professionals all agreed a heart attack was the most likely cause, is still very much a personal concern for me); but if something is bothering you then the issue is entirely in your head, not your chest. So, why don’t we say ‘Look, I need to get the asymmetry of the recent Land Rover Discovery off my brain/out of my head’?

Then, we have spleen venting. What the fuck is that all about? I got a B in Biology at A-Level, and even studied it as a minor subject in the first year of my Law Degree at Lancaster University, but I still had to Google what the spleen is even for. If you’re interested, it’s for filtering the blood, apparently, but don’t you dare tell me you already knew that, unless you happen to be a medical professional who specialises in Spleentology or Spleenectomies (don’t bother checking, they’re both real words).

In all honesty, before I read up about the spleen on Wikipedia a moment ago (and, if it’s on Wikipedia, it must be true), you could have told me that the spleen is an entirely useless organ that humans can easily survive without – like the appendix, or, more recently for me, the penis – and I would have thought twice about questioning you.

So why do we ‘vent our spleens’ when we get angry? What has the spleen got to do with anger? Why do we not aerate our kidneys, oxygenate our livers, or open our bowels? Ok, maybe not the last one.

The point is, even discussing anger has now got me angry, and that’s when I begin to suspect my temper might be getting out of hand, and I should perhaps seek professional help.

Then again, at other times, I realise that the problem is not necessarily me – it’s other people. If other people would stop being dickheads, and would just behave normally, we’d all get along famously – and my blood pressure might remain at healthy levels.

For example, since I wrote the majority of this week’s entry on Tuesday, there have been at least three instances of dickhead behaviour directed toward me, which even the most placid of individuals would have found infuriating.

Firstly, on my drive into work on Wednesday morning, a taxi driver turned right from the left hand lane of a two-lane roundabout, without indicating, narrowly missing hitting my car at speed. Now, had he accepted his actions were reckless and apologised, he may have escaped with a simple ‘what the fuck was that?!’, but he somehow decided the near-miss was my fault, and swore at me. Needless to say, I called him every abusive word I could think of (and some I invented on the spot).

Secondly, when I went for a run last night, the motorists and other pedestrians all conspired to make the experience even less pleasurable than it already is. The pedestrians constantly blocked the pavements, forcing me into the road, while the motorists drove at me and beeped their horns (for no apparent reason other than to try and give me a heart attack).

Finally, both boys have behaved like morons all week, and haven’t gone to sleep until nearly 10pm each night. Isaac, in particular, appears to be determined to break his bed, by jumping and dancing on it while singing songs from The Greatest Showman late into the night. This has meant my wife and I get very little evening to ourselves, have ended up eating dinner way later than is healthy; and, when we have finally made it to bed, we have been joined by P.T. Barnum himself within a few hours, resulting in us having to sleep on around six inches of mattress*.

*Just to clarify, when I say ‘P.T. Barnum’ joined us in bed, this is a reference to Isaac and his love of The Greatest Showman, rather than my wife’s love of Hugh Jackman. Believe me, if he joined us in bed, she’d be hoping for a little more than six inches to sleep on.

On that note, thanks for reading x