Well, it’s now officially 2019 (not that anyone was claiming it was unofficially 2019 prior to midnight on 31st December, mind), and I would like to wish you all a Happy New Year.

I don’t have many wishes for the coming twelve months, but I would like to increase my audience, to edge me nearer to that lucrative book / film / YouTube / adult entertainment deal. Seriously, I’m not that fussy (except, perhaps, in the last category), just so long as I can earn enough to bid farewell to my shitty commute.

To put things into perspective, I now have nearly 700 followers on Facebook, so it would only require each of them to encourage 100,000 of their friends to sign up, and I would then have a fan base roughly equivalent to the population of the United Kingdom. I’d be content with that.

I am less popular on Twitter, however, where I have approximately one-tenth of the followers (so each would need to recruit 1,000,000 friends to achieve the same result, which I accept is a bit of an ask), and don’t even get me started on Instagram. No, seriously, I haven’t got started.

I wouldn’t mind so much, as I am hardly active on Twitter, but I’ve just checked and the three most followed people are seemingly Katy Perry, Justin Bieber and Barack Obama. Really? Sure, they can all dance, but two of them are as thick as mince (and if you can’t decide which is the odd-one-out, frankly, so are you).

Anyway, the main thing is, you are here – which makes you very special to me. And, until someone tells me otherwise, I’m still here too, so let’s crack on, shall we?

I have said before that my family – particularly our two boys – are an almost constant source of comedy material, and the Christmas period was no exception. If we add in my wife’s family (of which there are frankly dozens), it is no exaggeration to say our festive period was a smorgasbord of hilarity.

Here are my six comedic highlights of Christmas 2018:

With three adult children, two daughters-in-law, and three young grandchildren all invading her house for Christmas, it was inevitable that Mum was going to struggle to keep everything pristine for the few days were we there.

Our mum is so house-proud*, but she dealt with the shit-storm of wrapping paper with her usual aplomb (and massive bin bag); however, later in the evening, she was clearly agitated as she dashed to gather cleaning products from her kitchen.

*©Madness/Sony/ATV Music Publishing (not that they will read this)

It transpired that, in the corner of her lounge, there had been a spillage – which had lightened her beige carpet to a shade between ‘Barley Twist’ and ‘Desert Wind’ on the Dulux Paint Scale (the latter not to be confused with ‘Dessert Wind’, which is something I suffered with following my second helping of cheesecake an hour earlier).

As the scrubbing intensified throughout the evening (occasionally interspersed with brief periods of ‘letting it dry’), it became clear the stain was not shifting, and the carpet had apparently been bleached.

This, naturally, was terrible news to everyone (although it did at least mean Ollie, Isaac and I were innocent, as none of us possessed anything likely to cause such damage), and Mum was obviously upset. Christmas was on the brink of being ruined.

Enter my wife (wait, I’ll rephrase that), who nipped to the kitchen shortly afterwards, and on her return burst out laughing. It transpired that, when she placed her foot in a particular spot near to the affected carpet, the ‘stain’ vanished. Yes, mum had spent at least an hour – and several litres of Mr Muscle – scrubbing what was nothing more than a patch of light reflected off a nearby shiny gift. 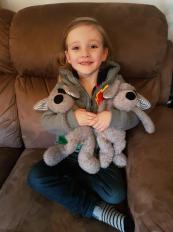 Christmas would not be complete (for us, at least) without a family quiz, and since I forgot to bring anything with me this year, I had to search online for something suitable instead.

Unfortunately, we were already well into my choice before I realised it was clearly created by – and aimed towards – Americans. I know this because:

Nevertheless, we persevered, and eventually stumbled across a geography section which featured countries other than America (and I’m talking actual Europe here, not just Canada and Mexico).

One of the questions was ‘Which country hosted the first Winter Olympics?’, and after a few mutterings around the room, Isaac burst in from the kitchen, shouted ‘France!’ and then buggered off again triumphantly. I still don’t know how he got it correct, but have a feeling it’s the only country he knows other than ours.

I was born in Stockport, have spent half my life living and working in the area, and I’m an avid supporter of Stockport County – all of which makes me suitably-qualified (and perfectly entitled) to admit certain parts of Stockport are rough.

For example, Edgeley (the home of Stockport County), does have some nicer areas, but these are largely surrounded by a desert of shit (not to be confused with a dessert of shit, which is also something I suffered with following my second helping of cheesecake).

Castle Street, the main shopping area in Edgeley, is honestly so run down and nasty, you could be mistaken for assuming the American military had recently swept through looking for WMDs.

To illustrate my point, here is a picture of war-torn Iraq:

And here is a picture of Castle Street, in Edgeley: 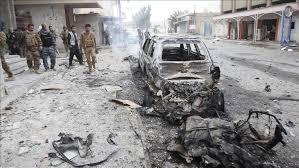 Anyway, whilst walking down Castle Street on Boxing Day, prior to County’s victory over neighbours Altrincham (which, conversely, makes Kensington look a bit dodgy), I encountered the greatest vision of couldn’t-give-a-fuck indulgence I have ever seen.

A young-ish woman (I say young-ish, because it’s often hard to tell in Edgeley on account of the fact most women are grandparents by their late thirties), resplendent in fluffy white dressing down and slippers – which she presumably received from one of the fathers to her children at Christmas – was drinking, I shit you not, a large pot of double cream like it was a can of coke.

Bearing in mind this was around 2pm, and she appeared to still be in possession of her senses, there is no other explanation than she had effectively abandoned what little etiquette remained – and couldn’t care less. I had to applaud her (albeit mentally, as she was probably armed under that fluffy exterior).

‘Explicit Cooking and Other Stories’

This Christmas my wife and her siblings (together with the three of us daft enough to marry them), agreed to swap gift ‘hampers’ per couple, rather than individual presents.

However, when it came to exchanging them a few days after Christmas, my direct sister-in-law (by which I mean my wife’s sister, as opposed my wife’s brother’s wife, who is my wife’s sister-in-law, but I still refer to as my sister-in-law too – clear?) immediately apologised for one of the gifts in our hamper, warning that it was intended for me, and should not be opened in front of the children.

As a keen cook, and purveyor of all innuendo, this book is a joyous gift to me, and I very much look forward to gobbling…. nope, can’t do it, sorry.

However, the anecdote does not end there. Whilst discussing the book between us all a few hours later, and immediately after someone had joked “I do enjoy a bit of cock”, my mother-in-law entered the room (following an entirely unrelated conversation she had just finished with my father-in-law in the kitchen), and announced ‘….to quote your father….’

I laughed so much, I swear a little sherry escaped out of my nose.

Whilst shopping in Norwich’s Chapelfield Mall a few days after Christmas, Isaac asked whether he could go into the Norwich City FC store; and so (despite the fact he has no interest in football – and if he did I would far rather he support Stockport County) my wife took him in while the rest of us waited outside.

A few moments later, we all heard the tapping of glass, and turned round to see that Isaac had somehow managed to break into the window display, and was proudly stood with all the mannequins waving at passing shoppers. He, naturally, found this hilarious.

Shortly before midnight on New Year’s Eve, I announced to the room that I was going to the kitchen, should anyone want their glass filling ready for Big Ben.

My mother-in-law, having initially declined, then decided she would like a glass of port – in a particular glass (which was kept in the conservatory), with a splash of the ‘cloudy lemonade’ she informed me was in the fridge in the utility room.

Already on my way to inebriation, and conscious that my in-laws have a tendency of using the words ‘conservatory’, ‘dining room’, ‘kitchen’ and ‘utility room’ interchangeably, I tried to memorise my instructions and set off, like a shit episode of Challenge Anneka.

Having located the glass and port, I then searched both fridges for the ‘cloudy lemonade’, and having found nothing more accurate based on that description, returned triumphantly with this jug:

In hindsight, I can see this is less ‘cloudy lemonade’, and more ‘you’ll be needing a course of antibiotics’, but bear in mind I was slightly drunk, in a hurry to make it back to the lounge for midnight, and I only had the light of the fridge to guide me at the time, you can hopefully understand my error.

This, ladies and gentlemen, is that lesser-known mixer, ‘gammon fat’.

Fortunately, I queried my decision before pouring a healthy splash into the port, and was promptly ridiculed by all in attendance.