You may be aware that last week was national ‘anti-bullying week’ (frankly, every week should be anti-bullying week, but I do understand the rationale behind selecting one particular seven-day period to focus everyone’s attention on the issue).

Naturally, head teachers up and down the country dealt with this in different ways; but our boys’ primary school participated in ‘odd socks day’, inviting all the pupils to wear mismatched (and brightly-coloured) socks, as a symbol of unity against bullying, and to celebrate everyone’s individuality.

If you don’t follow my Facebook page (although I suspect the vast majority of those reading this do), you may not be aware that, on ‘odd socks day’, I posted a photograph of my two boys from the knees down, displaying their chosen footwear for the day. Here’s the photo: 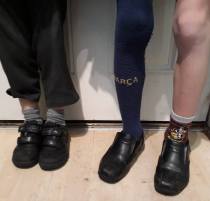 Yes, in true Isaac fashion, he refused to take part; and whilst my wife and I obviously accepted his choice, we were still concerned that he might change his mind once he arrived at school to be greeted by all the other pupils in colourful socks – or, worse (and rather ironically), that he might be teased for being the odd-one-out – so we shoved a spare (mismatched) pair in his bag just in case.

Bullying is an important issue, and whilst the focus always tends to be on children during anti-bullying week, this is usually because:

So, in a rare turn of events, the remainder of this week’s entry is aimed towards children, and whilst you adults are naturally welcome to read on, I would appreciate it if you could share what follows with your own kids, or any that you happen to know.

You probably don’t know me, or ever get to read what I write about, but that’s because I tend to be a bit rude and swear a lot. Hopefully, your Mum or Dad (or whichever grown-up has asked you to read this) likes my blog, and finds it funny.

I wanted to talk to you about bullying because, statistically, you will experience bullying at some point in your life (whether directly or indirectly), and it’s an issue which needs addressing. I am by no means an expert, but I have gathered a few readers over the years, and if the message gets through to just a few people, it was worth it. Besides, I was bullied at school, so I know what it’s like, and that’s a pretty good starting point.

Firstly, let’s get one common error out of the way. Bullying is not always physical, and can just as easily (perhaps even more easily) take the form of words rather than punches. You may even have bullied someone yourself in the past – even if you don’t want to admit it – because if you have ever teased someone, and taken the joke too far so that it upset them, that’s bullying.

Look, I like to make people laugh, and sometimes I do that at the expense of others, but I would like to think I know when to stop, and if the person who is the subject of the joke doesn’t find it funny, then that’s not right. I’ve made this mistake myself over the years, and hate to think I might have upset people, but I now try to find humour in other situations – preferably at my own expense, to be on the safe side. Fortunately, I embarrass myself quite a lot, so I’ve usually got plenty of material.

Bullying doesn’t even need to be in person, and that’s the really scary thing, because the internet (which, believe it or not, didn’t exist when I was your age), now makes it so much easier for bullies and – even worse – makes it much harder to detect and stop.

If a child comes home from school with a black eye, or a bloody nose, or a bruised arm, this is a visible sign that hopefully their parent(s) or teacher(s) will ask them about. Ok, it might be down to a simple accident (and my kids are always having accidents), but it could equally be the result of bullying. However, if that same person is being bullied online, or via their phone, it’s not as easy to spot, and that child’s misery may go undetected – or could be mistaken for something else.

I want you to take a second and think about your friends, classmates, siblings, and anyone else you are in contact with each day, and really think if you might have crossed that line at some point. If, like me, you have ever taken a joke too far at someone else’s expense, ridiculed them, or even physically hurt them, there’s still time to apologise and change.

Alternatively, maybe you are the one who has been bullied in the past, or you might even be the victim of bullying right now, and it’s you that I really want to talk to, because you can – and must – do something about it.

I am pleased to say I have never physically bullied anyone, but that is for one very simple reason, and it’s this:

Just look at me. I’m not exactly physically threatening, am I? And that’s me now. Believe or not, I’m a lot more appealing as an adult than I was as a child/teenager. When I was at primary school, I had over-sized glasses and the hair of a fifty-year-old woman. Don’t believe me? Take a look at this: 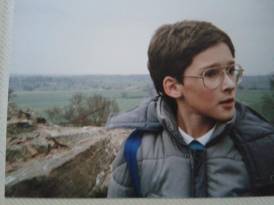 Then, when puberty arrived (that’s when your body starts to develop and get hairier, if you didn’t already know), I ended up with even worse hair and terrible skin. Being skinny, wearing glasses, having spots, or being socially-awkward, is usually enough for any bully to work with, and I had all four going on at once.

I was an easy target, for most of my teenage years, and I’m just glad I was mentally strong enough to cope, because some days I was utterly miserable at school. It frightens me that not everyone has that inner-strength, and some victims of bullying fail to see a way out. Believe me, there is always a way out, because there is always someone out there willing to listen and help.

My escape was being funny (or, at least, trying to be).

I realised, when I was growing up, that I had a knack for making people laugh, and it gave me a buzz when others found me amusing. I slowly managed to alter people’s perception, so that rather than laughing at me, they laughed with me. Not everyone, obviously, and there were still some of the bigger kids who picked on me, but it only ever resulted in physical violence on a few occasions, so I suppose some people might see that as fortunate, even though psychological bullying can have longer-lasting effects.

Because I wasn’t ever blessed with good looks – some would say I’m still waiting – not to mention the fact I needed glasses from a young age (and, back then, wearing specs wasn’t cool like it is today), I never had the distractions of going out lots, or girls, and so I worked hard at school instead.

I didn’t know it at the time, and if you’re in the same situation you may not appreciate it either, but being ‘geeky’ was one of the best things to happen to me. I got really good grades in my GCSEs, and even though I didn’t do as well in my A-levels (thanks, in no small part, to the fact I had been rejected by several girls in my year, and it started to get me down a bit), I still went to a good university, then law school, and now I have a decent job.

Better still, when I was at university, I met a girl who was able to look past the rubbish hair and glasses (even though she later persuaded me to change both), and she fell in love with me for who I am. We got married in 2004, had our first son in 2010, and our second son in 2014. I still wish my school life had been happier, and perhaps filled with more female attention in the later years (ok, any female attention), but my point is this: everything worked out in the end.

Popularity, sporting achievements, and having a boyfriend or girlfriend isn’t everything, I promise you. If you try to be a good, kind person, things will work out. You will be popular. You will find love. If I can get married, have kids, and enjoy a relatively successful career (I added the word ‘relatively’, because I’m typing this on my lunch break, and it ended about twenty minutes ago), then there is hope for us all.

Each and every one of us is amazing in our own way, and that includes you. Don’t ever let anyone make you feel worthless, or inferior, because it usually only means they are compensating for something missing from their own life.

And, if anyone does make you feel that way, whether their actions take a physical or psychological form, it is absolutely ok to tell someone, and get help. You never need to suffer on your own, and even if you don’t think you can speak to your parents, or teachers, or friends, there are charities like Childline. Their number, if you or anyone you know needs it, is 0800 1111.

Basically, just be you, because you are bloody brilliant. I promise.