Next Wednesday is Halloween (or Hallowe’en, for anyone who gets turned on by seemingly pointless apostrophes) and, as far as child-focused events in my calendar go, this has to be one of the shittiest.

Don’t get me wrong, there are plenty of grown-up fixtures that I dread reaching each year – such as dental appointments, the day the clocks go back/forward (I can never remember which is the crap one where we get less sleep) and Valentine’s Day; but when it comes to dates the children look forward to, Halloween is right at the bottom end of my personal league table.

It wasn’t always this way. As a kid, I used to quite enjoy Halloween, because it involved dressing up in a ridiculously inexpensive and thoroughly unconvincing ‘scary’ costume (which, invariably, meant putting on a bin bag and a cheap cartoonish mask that mum had bought at the newsagents), before going around our neighbours on the cul-de-sac where we grew up.

We would gently tap on their doors, full of anticipation and excitement, utter the customary ‘trick or treat’, politely wait for them to tell us how adorable/scary we looked (lies), and then gratefully receive sweets and chocolates for our troubles.

It was all just harmless fun ‘back in the day’, and the best part was getting home in the warm, then emptying our bags of loot onto the living room floor, to check how lucrative that particular year’s haul had been.

The worst that ever happened, was occasionally some miserly fucker would give you a packet of ‘Parma violets’, which had clearly been found hiding at the back of a cupboard (having been rejected by everyone – or even discarded by their own kids – the previous Halloween: no one ever eats Parma violets, they just re-gift them); but these lesser ‘treats’ were easily passed off to a younger, more naive sibling (or eventually the bin), and then everything would be fine again. 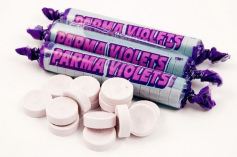 Nowadays, however, I dread Halloween – although not for the reasons you might think. Look, I know I can be a miserable git at times, and it doesn’t take a great deal to get very firmly on my tits (although, sadly, ‘very firmly’ is not a phrase often associated with my tits these days); but my reasons for detesting Halloween have nothing to do with the fact I am no longer a child myself.

Look, even though Easter, Christmas and my birthday don’t necessarily carry the same magic they did when I was young, now that I have kids of my own I can still enjoy these events vicariously through them. The magic of Father Christmas, the unwrapping of birthday presents, and the sheer unadulterated gluttony of the Easter bunny, may all have different meanings these days, but it doesn’t mean they are any less enjoyable.

Halloween, however, has changed for the worse.

If my boys could simply stick on a bin bag and a cheap mask, then go around the houses on our street collecting confectionery – like my siblings and I used to – then I may still enjoy Halloween to an extent, but it’s just not the same as it used to be (which, admittedly, does make me sound old and grumpy).

I firmly believe that, as a general rule of thumb, once a child reaches secondary school age (and certainly once they have conquered the trials of puberty), they need to stop participating in Halloween. This is partly because Halloween is intended to be a night for young children to go out and enjoy themselves, not for teenagers to profit from the generosity of the community, but mostly because the older the youths to our front door get, the more likely I am to shit myself when I answer it.

And, whilst I am admittedly something of a wimp when it comes to confrontations with gangs of teenagers, I am at least partially-protected by the fact my wife is a teacher at an all-boys secondary school, so any young lads looking to cause trouble tend to leave us alone – because they know full well she can identify them if necessary.

Elderly residents do not usually have this protection, however, and when faced with a teenager hammering on their door during Halloween, it can understandably be very frightening. This is especially troubling, since many pensioners are already at risk of shitting themselves purely by eating something moderately spicy, by bending over, or by moving suddenly in their chair, so they don’t always appreciate an additional threat to their underwear.

Now, I have already said that Halloween is meant to be a bit of a laugh, so as long as the child in question has made an effort, I’m more than happy, but even this appears to be a thing of the past.

From my recent experience, the children of today – presumably via their dickhead parents – either make no effort whatsoever (last year, we had a kid who had simply put a black hoodie on, and whilst it was pretty scary, that’s only because I suspected he was carrying a knife), or go way over the top and spend a fortune on something elaborate. 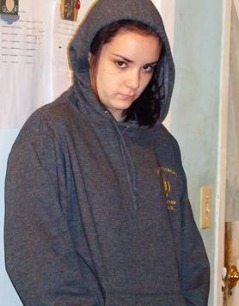 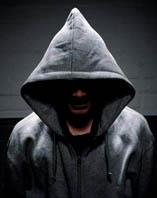 Then, there are the parents themselves, who spend hours with a professional make-up artist, until they look like an extra from The Walking Dead.

The only time I appreciate a serious amount of effort going into a child’s Halloween costume, is if the parent is clearly making reference to a famous horror film, and the kid in question is completely oblivious – but going along with it. 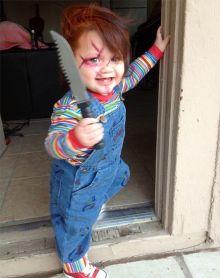 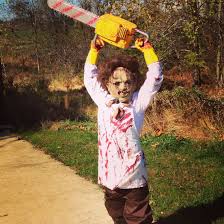 While some of the confectionery I received as a kid was frankly disappointing (I don’t want to sound ungrateful, but feel confident none of our old neighbours will read this, and George with his fun-size Bountys can frankly go fuck himself), children nowadays are apparently no longer happy unless they receive a large bag of Haribo, a entire box of chocolates (and none of this ‘Quality Street’ shit, thank you very much, the youth of today appear to have been weaned away from the breast on Belgian truffles and Ferrero Rocher), or, in extreme cases, they just want cold hard cash.

It’s now only a matter of time before kids are carrying contactless card readers around with them on Halloween, or begin asking for a BACS transfer directly into their account.

Here’s the biggest change since my youth – we didn’t really have any tricks when we were kids. This was partly because we weren’t delinquent little fuckers in the 1980s, and we respected our elders, but mostly because no adults ever called our bluff. We knew they would never choose ‘trick’ over ‘treat’, and they knew we didn’t have any tricks in the first place, so it was a symbiotic relationship of trust and mutual understanding that worked perfectly fine.

I’m not sure when Halloween changed for the worse (although there was at least two decades between my outgrowing it, and Ollie being old enough to participate), but it strikes me that kids nowadays see Halloween as an excuse to go out with half a joke shop hidden about their person.

Oh, sure, it might have started out relatively harmlessly, with some ‘silly string’, a water pistol, or a fake spider/dog poo/hand grenade etc.; but no sooner had society let this sort of behaviour go unpunished, we are now faced with teenagers throwing eggs and flour at our homes and cars if we don’t cough up (and sometimes even when we do).

The situation has become so threatening, I now have to keep a broken glass bottle and a baseball bat behind the front door just in case.

Nowadays, however, I feel like I’m letting our boys down if I don’t buy the largest pumpkin I can find, then lose most of the skin off my hands by gouging out the disgusting insides (yes, I know you can use tools, but I still end up red raw by the time I’m finished).

Ok, the end product of an intricately carved pumpkin can be somewhat rewarding, but hollowing them out is messy, time-consuming, and bloody painful, and I’m not sure it’s worth it for something which will rot in less than a week.

Plus, everyone now sees pumpkin carving as a competition to come up with the most elaborate design, and that just means yet another opportunity for my children to be hopelessly disappointed in their father. 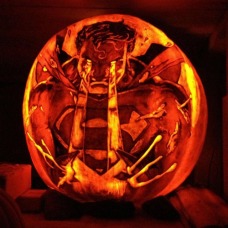 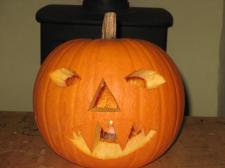 What’s the point? When did Halloween become so obsessed with intricate vegetable designs? It’s not like we gouge out the insides of our turkey on Christmas morning, then carve a rude word into it’s flesh during the Queen’s speech (well, my Nan did one year, but in her defence she’d been on the booze since 7am).

So, overall, Halloween is not what it once was, and I now dread it each year.

As a child, it was a fun night of dressing up as a harmless ghost or vampire, visiting the houses on our street, and receiving delicious goodies off kindly neighbours.

But now, Halloween is an excuse for reprobate teenagers to scare the crap out of pensioners, and then mug me on my own doorstep. And I’ll tolerate it, because the alternative is getting the shit kicked out of me, or having my car covered in eggs and flour.

Stay safe, folks. It’ll all be over soon, then we can look forward to Christmas.