A couple of weeks ago, I went camping with Ollie.

Ok, it wasn’t proper camping, and it was only one night, but bearing in mind I am to nature what Stevie Wonder is to clay pigeon shooting, I was still well outside my comfort zone. In fact, there was no comfort in this particular zone whatsoever.

A few months back, the PTA at Ollie’s school announced they would be hosting a ‘Camp Out’ on the school field, and it would be an opportunity for parents and children to sleep in tents, whilst enjoying a BBQ, live music, and all the other delights which camping has to offer (although, at present, those delights elude me).

Stupidly, I made the mistake of asking Ollie whether he was keen, and naturally he thought it was a fantastic idea. I only had myself to blame, as I should know by now that there is very little Ollie will not try at least once – apart from vegetables.

So, even though we owned no camping equipment whatsoever (the last time I slept in a tent was the Leeds Festival in 2000, and the fact I haven’t since – despite the intervening eighteen years – gives you some idea of how ‘fun’ I find sleeping outdoors), I was now committed.

Having carried out some research, and armed with a discount code from Mountain Warehouse, a few weeks ago I purchased a three-man tent, two sleeping bags, a double airbed (with pump), and travel pillows.

My main reason for investing in a three man tent, even though it would only be myself and Ollie sleeping in it, was so I would have extra room (at 6’3”, I need all the space I can get). What I didn’t foresee, was my wife suggesting I can now take both boys camping at some point, but I can assure you that there is a far greater chance of Satan building a snowman.

Anyway, as the event drew near, it became obvious that the weather wasn’t going to be great – and even though some people believe rain adds to the ‘charm’ of camping, I am not one of those people. Look, some people believe in clairvoyants, the healing powers of little crystals, and that the earth is flat – so clearly some people are morons.

Still, having forked out a tidy sum – despite the discount – I wasn’t going to let rain spoil our plans, and even though I am more Paddington Bear than Bear Grylls, I was determined to put my differences with camping aside, for the sake of my rather excited son.

I did, however, begin to worry that I would be the only Dad who struggled erecting his tent, and that other men might judge me. I am sure this was nothing more than paranoia on my part, and they would be more likely to judge me for sniggering every time someone said ‘erect’; but I have always been sensitive about what people think of me, and the fact I am the antithesis of a manly-man often plays on my mind.

I therefore chose to partially erect *snigger* the tent in our living room beforehand, as a trial run. I wasn’t planning on hammering tent pegs into the carpet, obviously, but if I could at least form an idea of how the damn thing assembled, I might minimise the risk of being UselessDad™ throughout the main event.

Except, not only was the tent far too big for the area between our sofas (which really irritated me, as I pride myself on having excellent special awareness; some say it is my best – or only – quality), but I chose the very moment my wife was trying to get Isaac asleep to attempt my erection *still sniggering*, and made too much noise in the process.

After more than half an hour of struggling with a piece of canvas so vast, I had started to wonder whether Mountain Warehouse had sent me a fucking parachute by mistake, I gave up, and reassured myself that I had at least gained an impression of what was required.

However, as is so often the case in these situations, folding the tent back up into the bag from whence it came was damn-near impossible; and even though I had predicted this might be an issue (so I had memorised precisely how it unraveled in the first place),  simply reversing the process did not produce the results I was after. The fucking thing had seemingly doubled in size as soon as it was exposed to air.

I don’t know whether Mountain Warehouse had vacuum-packed my tent, or flattened it with an industrial machine of some description (perhaps a steam roller), but there was not a chance I was going to be able to fold everything back into the same size.

A woman in this situation will patiently unravel the tent again, before methodically repeating the process of re-folding the components over and over, until she has satisfactorily replicated the original factory environment. She will then delicately return the tent to its bag, zip it shut with a triumphant smile, and go about her business.

A manly-man, on the other hand, will bear-hug the tent until all the air has escaped, and it has been adequately squashed back into a package small enough to force into the bag. He will then use his manly arms to yank the zip closed.

Me? I unfolded and refolded the tent at least a dozen times, becoming redder and angrier with every attempt, whilst uttering words no inanimate object should ever be subjected to. Let’s just say, ‘camping’, ‘children’ and ‘countryside’ aren’t the only C-words my tent has encountered.

I did eventually get everything back into the bag, but not without a great deal of effort, some burst blood vessels, more terrible language, and the fear I may have broken something (aside from myself) in the process. Still, everything was packed away – albeit into a bag now straining at the zip – and I resigned myself to ‘winging it’ on the day.

Due to the fact the ‘Camp Out’ started at 4pm (once the main school rush had dispersed), and because I didn’t want to be putting my tent up after everyone else – when they would have nothing better to do than laugh at my inadequacies – I booked the afternoon off work and collected Ollie early.

Whilst we were still one of the last to arrive, I was relieved to discover most had already pitched their tents and were congregating on the playground, rather than pulling up chairs to witness my abject failure as a father. 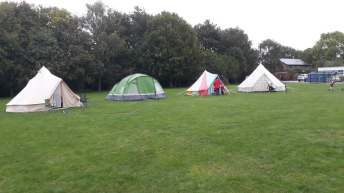 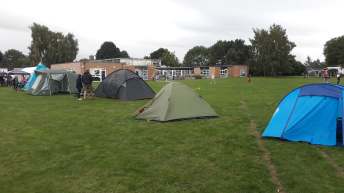 This was for the best, because when it came to unpacking our tent again (I say ‘unpacking’, but as soon as I forced the zip open, it more or less erupted out, like a volcano of blue canvas), and I had a bit more room to study the components, the assembly was not as I had imagined.

Thankfully, some children were playing football on the other side of the school field, so I sent Ollie to join them, while I commenced shouting and swearing at the tent once more. I was extremely careful not to utter any Grade-A expletives this time, but I did lose it at one point, and hiss through gritted teeth:

“Look, I’m going to insert my pole A into your bracket B in a minute, you piece of shit.”

I’m not proud of it, but I was under pressure to complete – and maintain – my erection in a suitably fast time (if I had a pound…), and the stress got the better of me.

Thankfully, in a moment of clarity, everything suddenly clicked – both metaphorically and, in terms of bracket B (as well as my hip), literally – and by the time Ollie wandered back to see how I was getting on, my massive heap of canvas now slightly resembled a tent. Kiss my arse, Ray Mears.

Utilising Ollie in very much a ‘hold this here, and don’t let go or I’ll scream’ capacity, I managed to secure the tent pegs and complete the remainder of our flimsy shelter for the evening without too much fuss. 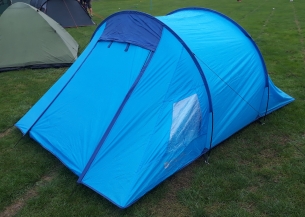 The inner-tent then attached with comparative ease, and despite the pump for our air bed making an embarrassingly high-pitched wheezing sound (which could have easily been mistaken for my christening the tent with an elderly asthmatic prostitute), before long we were fully erect and good to go (sorry, I can’t help it).

Ollie appeared delighted, and even congratulated me with “Well done, Daddy, you can have a nap now” (I need to stop going for a nap every time I achieve something useful around the house), but I decided to celebrate my success with a can of beer instead. 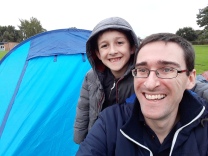 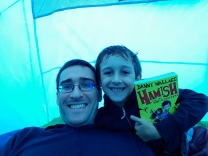 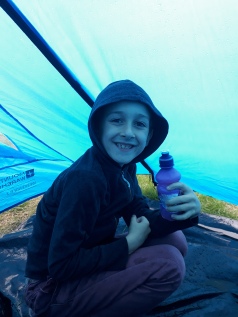 Fortunately, we finished putting the tent up just in time, as the Heavens opened shortly afterwards, which – rather than shelter with me – was Ollie’s signal to go back to playing football.

As the rain got heavier, I tried to shout for him to come back; but he either couldn’t hear me, or had engaged his selective deafness, because he didn’t so much as glance in my direction. Conscious that he only had one change of clothes, which were supposed to be for the following day, I reluctantly left the sanctuary of our tent to drag him back inside.

Whilst he initially refused, once I had carefully explained the situation using words like ‘soaked’, ‘pneumonia’ and ‘bollocking’, he eventually returned to dry out. The fact I was now drenched as well did nothing for my mood, and the final straw was when he stumbled into the tent, kicked my freshly opened can of beer over, and soaked our ‘porch’. Fortunately, the can stayed out of the sleeping quarters, and missed soaking our bags, which was the only thing that saved Ollie from being launched over the nearest hedge. 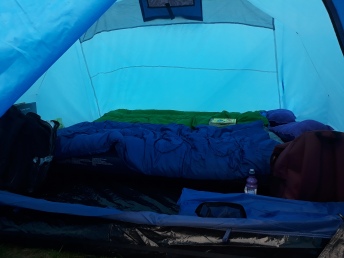 I have to say, however, once my rage subsided, the remainder of the evening went really well, and the PTA did an amazing job – with a BBQ, music, marshmallows, and games for the kids (including a treasure hunt around the playground).

Ok, I got barely two hours sleep – thanks in no small part to the fact I had purchased a sleeping bag ever-so-slightly too short, and because Ollie somehow managed to sleep like a starfish (despite being in a bag of his own), which resulted in me spending most of the night with his knee embedded in my lower spine – but our first ever camping trip, and my first night in a tent for eighteen years, was a relative success.

I should be ready to do it all again in, oh, another eighteen years or so….