Last Sunday, I completed the seventh race of my 10 x 10k challenge for 2018, at Birchwood, near Warrington (a place so nondescript, the BBC weather app doesn’t even acknowledge its existence – presumably because it is overshadowed by that monstrous IKEA down the road, which is seemingly so vast, it is now twinned with Luxembourg).

I feel I don’t need to repeat my utter hatred of running, as I have publicised this more than enough already, but suffice to say I approach each new 10k with the same feeling – one of dread. My siblings and I have coined this sensation ‘swimming lesson belly’, because when we were kids we all hating swimming lessons, and suffered that same sinking feeling in the pit of our stomachs as the weekly lesson approached. To this day, I still can’t watch ‘Garfield’ without getting that same knot in my gut (it was always on BBC1, just before we had to leave our house for the local swimming baths).

Fortunately, the (slightly irrational) apprehension I suffer in the days prior to each race is easing slightly, which I assume is partly due to the fact I have now successfully completed a number of events without major incident (if we conveniently ignore the one race where there was an incident), and partly because the end is almost in sight.

That said, because I completed last Sunday’s Birchwood 10k in under fifty minutes (which is an unofficial target I have set myself, after the far more important task of actually running all ten races, I have decided to re-enter the Tatton Park 10k in October, because it is the only race so far where I had to stop and walk for a bit, and which consequently resulted in a slower than fifty minutes finish.

At the time, I cut myself some slack, as it was the first event following the Whitchurch 10k (and my confidence was somewhat knocked), but now the dust has settled, I can’t help thinking it might be the only race of the ten which lets me down, and I’d hate to pass up the opportunity to rectify that. Besides, it’s the only race I can re-run (as the majority are annual), and I currently have a little gap in October which it will slot into nicely. My wife isn’t chuffed with the idea, but it’s something I feel I need to do.

So, ultimately, the Birchwood 10k is actually now relegated to event number six, rather than event number seven, but wherever it sits in the grand scheme of this challenge, it couldn’t have gone much better.

Ok, the weather wasn’t ideal, as this was the first race where I have been rained on (heavily), but it turns out rain – despite the nuisance factor of wearing glasses – is ultimately preferable to the stifling heat I completed the Alderley Edge 10k in last month (which may well be the only time ‘Alderley Edge’ and ‘stifling heat’ have been used in the same sentence).

Overall, the Birchwood 10k was a well-organised, friendly event, with runners (and pacers) offering regular encouragement to one another, and it’s amazing how helpful that can be – particularly when this was one of those events where the wearing of headphones was unfortunately banned (albeit poorly enforced).

I even made a friend prior to the race starting (‘oooh, running fwend’), when an older chap and his wife noticed my bespoke Kidscan shirt, and commented that he too was running ten 10k races this year for his chosen charity (Alder Hey Children’s Hospital); so we shared our progress, and wished each other luck in our respective challenges. I especially liked him, because he had the decency to finish behind me by a few minutes (I do hate it when runners several years my senior make me look rubbish).

Anyway, without further ado, here are my scores for the Birchwood 10k:

Time: 49:13 (which, aside from the rather anomalous Whitchurch race, was just two seconds off my PB)

Position: 329th out of 957, which means I have just missed out on my final semi-official target of finishing in the top-third of each race (but, frankly, I’m not that bothered anymore).

Cost: £18.00 – which is pretty much average, although there was an unexpected – and rather randomly calculated – £2.08 ‘processing fee’, making this one of the more expensive races, unfortunately.

Course: A bit of a mixed bag, really. We started outside a shopping centre, ran along some roads – which were only partially closed to traffic – covered a couple of miles of parks and cycle-paths, when headed back onto the roads – including crossing the M6 twice (don’t worry, there was a bridge, they aren’t that fucking stupid) – before finishing on the other side of the same shopping centre.

A very windy route, which you could easily get lost on if it weren’t for the excellent marshaling (and sheer number of runners around you), but it was almost entirely tarmac and, aside from the three times we had to cross roads over bridges, it was relatively flat. Overall, it could have been much worse – 8/10

Weather: Had the rain stopped fifteen minutes earlier than it did (or not turned up at all), the weather would have been pretty much perfect, but by the time it dried up I was already soaked. Still, the temperature was ideal, and apart from some muddy spots, once the rained ceased I could have no complaints – 8/10

Organisation: Ok, the pre-race pack which was posted out to us may not have been as polished and glossy as the Alderley Edge publication a couple of months ago, but it still contained every piece of information I needed, not to mention the rather unwelcome news that – due to the route not being completely road-closed – headphones were banned, and anyone seen wearing them would be disqualified. As usual, it turned out a number of people ignored this rule, and seemingly got away with it, but I wasn’t willing to take the risk 8/10

Official Photos: Unlike every other event I have taken part in so far, this one boasted not just one but two official photographers. Unfortunately, both want to charge me to show you the snaps I feature in, and one of them almost missed me completely, in that he only captured the left side of my body – and none of my (admittedly no doubt red and panting) face.

In fairness, this was probably because my sprint finish was faster than anything he has ever witnessed, but I still don’t want to pay over a tenner for a glossy picture of the poor bastard I was zooming past on the final straight; as his particular moment of glory was overshadowed by my left elbow and a bit of side-boob.

The other photographer did manage to take one snap of me, but I again look like shit, and even though his prices were more reasonable, I still object to paying for a photo of me looking dreadful just so I can explain my point to you, dear reader 6/10

Medal: Solid, metal, an unusual shape, and bright green – which means it certainly stands out among my collection. We also have three of them as a family, since a kindly old chap decided he didn’t need medals at his age, and gave the two he had (I presume the other was from a friend) to our boys. I tried to disguise my disappointment at the fact they had received the same medal I had worked bloody hard for, despite only spending an hour in the warm in Costa, but fear I didn’t hide it too well – 8/10

Goody-bag: There wasn’t one, but in its place we received a rather fetching – and good quality – running shirt (my fourth of this challenge), in bright green to match the medal.

Rather annoyingly, however, not only did the children who ran the 2k fun run earlier in the morning actually receive a goody-bag (look, I’m not suggesting I desperately wanted a yo-yo and some bubbles, but the crisps and chocolate would have gone down nicely), but yet again my kids were the recipients of some left-over bags, so now they had medals and treats, for achieving the grand total of fuck all. In the warm.

Still, at least the little scroungers didn’t get a t-shirt, and it is really nice – 7/10 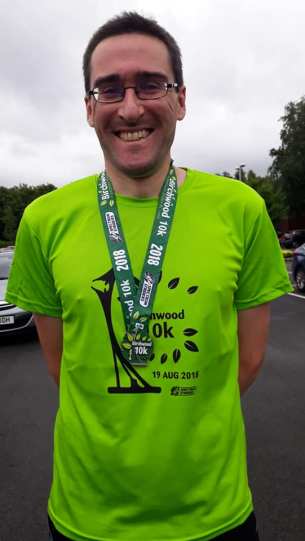 Post-race refreshment: We got a bottle of water as we finished and…. that was it. Not even a flapjack. Oh dear, Birchwood, and it was going so well. I have, however, decided not to mark them too harshly, on account of the fact I have usually felt too sick to eat the flapjack or jelly babies offered at previous events anyway – 4/10

Giving Birchwood a total score of 49/70 (or 70%) – placing it joint third with Whitchurch on my leaderboard:

I am still amazed that the Whitchurch event is doing so well, as I have nothing but horrible memories of what happened at the end – and in the days afterwards – but the scores don’t lie.

For my next race, I’m coming home – in more ways than one. Not only is the Sandbach 10k walkable for me (and, by that, I mean I can walk to get there, rather than walk the course), but it’s the first 10k I ever did last September, and I now appreciate how flat the course is. Plus, my brother and some friends are joining me for this one, so it isn’t filling me with the usual dread (or swimming lesson belly) which most of the others have.

As ever, if any of you fancy sacrificing the cost of just one drink from this weekend, and chucking it towards a charity working really hard to combat childhood cancer, then here’s the link: