Can I call you Mark? Actually, there’s no way of you responding to that right now, so I’m going to call you Mark until you tell me otherwise.

I don’t suppose you’ll get around to replying to this for a few days, as you’re probably busy rolling around (naked?) in your piles of cash. Hey, no judgement from me, as that’s exactly what I would do if I had your money. I mean, maybe not at the moment, as I have a bit of a jippy tummy, and I’d hate to risk a fart on my ‘cash bed’ – but I guess with these new plastic notes, at least they can survive a good hardy wash.

Sorry, went off on a tangent there for a moment.

The reason I’m contacting you, is because you strike me as the sort of chap who always strives to make his products better, and as a Facebook user for more than ten years, I think I’m pretty well qualified to say what’s currently wrong with it (well, apart from the millions of dickhead members, who drive me to the very brink of jabbing myself in the eye with a rusty screwdriver each day).

Anyway, I thought I’d set out my suggestions for improving Facebook, and you can let me know what you think. There’s no pressure for you to take any of them on board, but a few of these niggles of mine are starting to escalate into something of a white-hot fury, and if I were to ‘go postal’ as a result, I’d hate for you to end up with blood on your hands.

Anyone who knows me, will tell you that I am generally a good-natured chap, who rarely gets angry; but emojis do tend to give me a nervous twitch (which sometimes escalates into an overwhelming urge to cause physical pain, when they are used excessively or incorrectly).

Frankly, I don’t see the point of using a crappy little cartoon character to express one’s emotions, when actual words will do just fine. Admittedly, I don’t understand a lot of youth culture in general – I’m not even entirely sure what a ‘Millennial’ is (other than to say it is someone younger than me, who I almost certainly detest) – but emojis are in the same category as skinny jeans, Love Island and the word ‘lol’. I refer to this as my ‘can fuck right off category’.

The only emoji I can even tolerate is the ‘winking face’ emoji (I call him ‘Mr Winky’, but that has been known to cause some confusion when referring to my penis by the same name), albeit only because he allows you to get away with being a total git to someone. For example, sending them a text saying ‘I hate you and want you to die’ might be construed as offensive, or even threatening; but stick Mr Winky in the end (excuse the unfortunate choice of phrase), and it’s nothing more than a jovial quip. No one can get mad when Mr Winky is around.

Then, a month or so ago (as I know you are aware) the emoji world took a turn for the even worse, with the introduction of 157 new ones – because, apparently, the youth of today are too bone-idol to actually type the word ‘peacock’ or ‘swan’. Seriously, look at this selection of utter pointlessness: 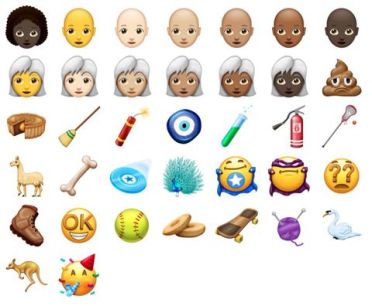 I can’t imagine for one second that the multi-racial pensioners of the world were angry about being under-represented by emojis, or that ladies with alopecia had taken to the streets with placards to protest for more ‘bald women emojis’. And when was the last time a simple ‘poo’ emoji wasn’t sufficient, and you felt the need to tell someone that the poo in question was a sad poo? Poo DOESN’T HAVE FUCKING EMOTION. It’s poo.

Anyway, since it looks as though emojis are here for a while, might I suggest the introduction of a few more the next time yourself and the other social media moguls of the world get together to make the universe a slightly more stupid place?

My preferred choices would be a ‘bullshit’ emoji (for when you want to question the validity of someone’s status or comment); and a ‘U ok hun?’ emoji – because if I see one more person actually type that phrase, I will hunt them down like a wild dog, and then go after their family.

Wait, is that Messi?

Vaguebookers have been a problem on Facebook for as long as I can remember. I cannot stand someone deliberately updating their status, or posting a comment, with something attention-seeking like ‘you should know better than to mess with me, you know who you are’, or ‘wondering why I bother’. If you want sympathy, or to get a reaction, then just tell us – or, better still, send a text or e-mail to someone who may actually give a shit. Don’t hint at your problem, and then hope we’ll all come running with the now-standard ‘aw, u ok hon’?

I’m not sure if you are able to design a ‘vaguebooker block’ of some description, to automatically prevent this from happening; but if not I am willing to offer my services to police Facebook day and night, and take whatever action I deem necessary towards any culprits. Sure, people will get hurt, but it’s a small price to pay for the good of society.

I think it would be nice to know when someone has ‘unfriended’ you on Facebook, because that way you can scowl at them when you invariably bump into them in the street a few days later. Imagine my horror, when I was recently saw someone I know in town, and smiled at them, only to discover the little fucker had unfriended me at some point. I had to register them for all sorts of unwanted and embarrassing junk mail (and dodgy websites) before I got over the betrayal, and that kind of shit takes time, Mark.

It’s really annoying, when you watch a funny – or otherwise fascinating – video on social media, but when you come to tell everyone about it in the pub, or at work, you can’t remember which friend shared or commented on it.

I think, if you have watched a video on Facebook more than once, it should be stored somewhere on your profile for later use, or until you decide you no longer need it. Surely, with today’s face recognition software, you could get everyone’s phones, tablets and laptops to recognise when they have enjoyed a video, and save it to their profile accordingly? Ok, you’d need to find a way to eliminate any ‘mucky’ videos they may have enjoyed in the same time period, but you’re a social media billionaire, Zuckers, you figure it out.

By the same token, would it be possible to design a method of informing Facebook users how likely they are to enjoy a video or article, based on their obvious sense of humour, and what they enjoy, before they click through thirty pages of crap and adverts to get to the bit advertised on their news feed?

I’ve lost count of the number of times I have wasted half an hour of my constantly-dwindling life span clicking through page after page of rubbish, only to be hugely disappointed by what I was promised in the first place. Just give us a rating out of 10, with 0 being ‘I really wouldn’t bother, this is shit’, and 10 being ‘no, you absolutely need to read/watch this, it will change your life and/or you will laugh your bollocks off’.

Can’t be that hard, surely?

I quite like the appeal of Facebook telling me what I did on any particular day in years gone by; but could you possibly tweak it a bit so that it only reminds me of the good stuff, and doesn’t make me feel so fucking old? Just knock a few years off the date, it’s easy.

I refuse to accept that our last holiday abroad was in 2015 (it feels like last week), or that it will be three years this December since I saw Def Leppard live in Manchester. Most people who go to see Def Leppard don’t have three years left, and that kind of realisation is pretty depressing.

I appreciate that, whilst you are one of the richest people on the planet, you cannot actually bestow super powers on people in real life; however what about a system whereby you can become invisible on Facebook, and comment on posts and threads under a randomly-generated pseudonym (and profile picture) so that nobody knows it’s you?

For example, I belong to a Facebook group called ‘What’s Going On – Sandbach’, and there is not a day goes by when I don’t want to destroy some moron, who either wants a job (usually ‘any’ job) but cannot spell basic words properly; is looking for a builder/plumber/decorator, even though someone else asked the same damn question the day before (and the day before that, and the day before that); or who has lost their cat AGAIN, for the fourth time this week.

I can’t leave the group, as there is occasionally one useful piece of local information every six months or so, and if I’m honest I find the morons quite entertaining in a perverted way, but I’d love to be able to tell them what I really think of their stupid bastard cat, without the repercussions of their meathead boyfriend paying me a visit and beating the living shit out of me.

Ah, I think I’ve just worked out what the ‘sad poo’ emoji is for.

Anyway, that’s enough from me, Mark. As I said at the outset, no rush to respond, so long as it’s within the week, and you can show that you have introduced at least one of my suggestions.

Take care, and thanks for reading

P.S. – oh, any chance you could sign a few thousand people up to my blog without them noticing?