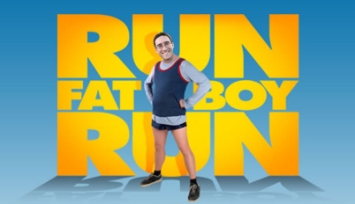 Last Sunday, I ran the latest event in the ridiculous 10 x 10k challenge I have set myself for this year, and it took place within the picturesque grounds – and surrounding countryside – of Colshaw Hall, in Over Peover (pronounced ‘peever’, for anyone even remotely interested), which is near Knutsford in Cheshire (pronounced ‘Cheshire’, for anyone even remotely interested). 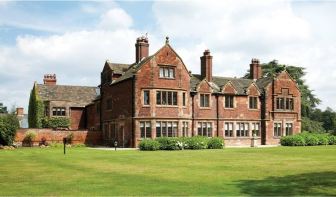 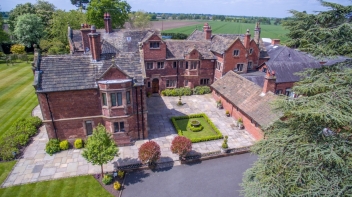 Regular readers may be aware – or may recall – that I am trying to run all ten events for charity, and my aim is to do so in under fifty minutes each time.

Unfortunately, having collapsed shortly before the finish line at the Whitchurch 10k in April, this knocked my confidence somewhat for event number four at Tatton Park the following month, resulting in me stopping and walking a few times (through a fear of ending up in hospital again). As a result, I not only missed my target of running the entire race, but my time was well outside fifty minutes (54:13, to be precise).

Fortunately for me (and I use the word ‘fortunately’ with more than a mere smattering of sarcasm), Tatton Park is the only one of my ten events to be held monthly, so I do still have the option of re-running it later in the year, should it transpire to be the only race where my targets have been missed.

Thankfully, I was back on track last Sunday, as – despite my legs begging me to stop and walk a couple of times towards the end – I managed to run the course in 49:23, which is very much in line with what appears to be my ‘usual’ pace (Sandbach last September was 49:16, Oulton Park this February was 49:11, and Poynton in March was 49:28). I conclude, from that information, that I tend to run a 10k in just over forty-nine minutes.

I was particularly pleased to complete the Colshall Hall 10k, for a few reasons:

Let me expand on that last point.

Normally, I don’t tend to run too much leading up to a race, and will only do a few miles earlier in the week. This time, however, I decided to instead run a full 10k circuit around Sandbach on the Tuesday evening, and then get extremely drunk on the Friday night. Ok, all the alcohol was well out of my system come the race on Sunday morning, but I was still feeling the effects of spending the whole of Saturday generally tired and hungover.

But, above all, most runners (and anyone with an ounce of common sense) will tell you it is best to avoid any injuries prior to a race, particularly when those injuries are to the whole ‘foot’ region.

So, imagine my displeasure / anger / rage, when – in rushing around before the school run last Friday morning – I stamped down hard on one of Isaac’s metal toy trains. I suppose I shouldn’t necessarily blame him for the injury (although that didn’t stop me), as I should have anticipated that he would want to keep his collection of Thomas The Tank Engine trains in a partially obscured spot on our bedroom floor. Only a fool would expect them to be in plain sight, or, I don’t know, in his own fucking room, but Isaac has never really conformed to what society would deem ‘normal’ behaviour.

So, Isaac left his collection of trains just where he wanted them – in a prime spot to badly hurt Daddy (and make him use many colourful expletives), two days before one of his races.

Of course, I don’t only blame Isaac, as naturally it took two people to cause my injury. No, I don’t mean me – as I dashed around like a headless chicken trying to locate a pair of socks – I mean this little shit: 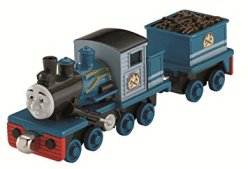 For the uninitiated, this is ‘Ferdinand’, one of Thomas the Tank Engine’s friends. And don’t let his goofy-toothed expression fool you, either, because Ferdinand, I discovered last Friday, is an evil metal bastard.

Now, I would upload a picture of my foot at this point, to emphasise not only the amount of pain that the initial injury caused me, but also the damage which persisted come Sunday’s 10k, however:

You’ll just have to trust me when I say that I was still having trouble walking, let alone running, by Sunday morning, to the extent that I almost pulled out of the race. Thankfully, in a short ‘test’ run with about half an hour to go, I realised that running would be relatively pain-free, so long as the middle of my left foot didn’t come into contact with any stones, potholes, tree roots, or another person’s foot (the latter of which being a real shame, as it’s often a tactic I employ when overtaking a fellow runner, to gain an advantage).

Anyway, my foot held up nicely, I finished the race in a respectable time, and I’m now well on my way to completing this challenge. So, without further ado (as I am well aware that these running entries aren’t very popular, and most of you stopped reading a while ago), here are my ratings for the Colshaw Hall 10k:

Position: 272nd out of 1,078 runners (which I’m really pleased with, as I have an unofficial target of trying to finish in the top-third each time, and there were dozens of ‘proper’ runners there from actual clubs – including a group from ‘Sandbach Striders’, who I managed to overtake and finish faster than – ha!)

Cost: £19.95 – on the expensive side, bearing in mind we didn’t get many goodies for our troubles.

Course: Easily the most scenic so far, comprising delightful little country lanes (without ever sending us down hazardous muddy tracks, or canal towpaths – Poynton 10k, I’m looking at you). The route took us all round Over Peover, and past the iconic Lovell telescope at Jodrell Bank: 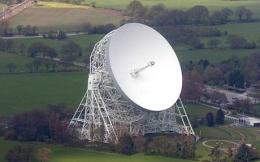 There were a few unexpected ‘hills’, however, which the organisers failed to mention – but when they clearly have as twisted a sense of humour as I do (bearing in mind the sign they positioned at the top of the steepest hill), it’s hard to stay mad at them for too long,: 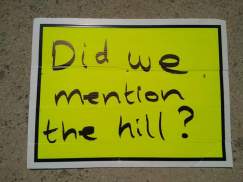 I did swear quite loudly at the time though, as it was bloody steep. Still, the course gets a solid 8/10

Weather: Almost perfect. Like Whitchurch, it was a little on the warm side for my liking, but it was dry, breezy, and about as good as I could have hoped 9/10

Organisation: Very impressive indeed. Each kilometre was marked clearly, there were helpful and enthusiastic marshals at every key point, and the pre-race pack was sent out nice and early, with everything you might need – not to mention the fact they allowed us to wear headphones, and sent us our race numbers and timing chips in the post, so there was none of that awkward safety-pinning with just a few minutes until the start of the race bullshit 9/10

Official Photos: Taken and uploaded – for free – by Bryan Dale, who I recognised from an event earlier this year (or possibly even Sandbach last year). He apparently had 5,000 photographs to sort through and upload to his website, which he clearly worked around the clock to achieve, so that we weren’t left waiting for long. I can’t really blame him that I’m either hiding, or looking like I might collapse, in the five in which I appear: 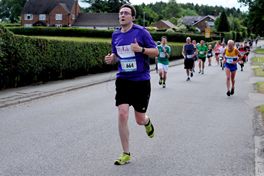 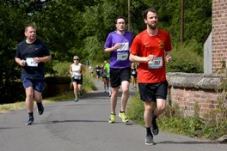 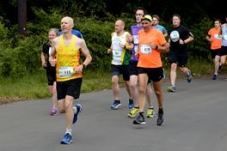 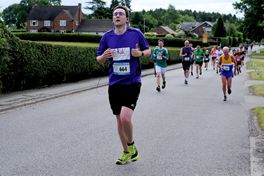 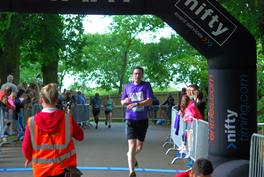 There is also apparently an official video, which will be uploaded to the Colshaw Hall 10k Facebook page soon, but I am yet to see it. Hopefully, I’m not featured 8/10

Medal: Massive, solid, and heavy, everything you want in a medal 7/10 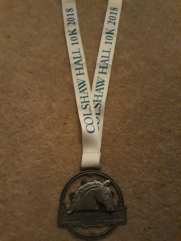 Goody-bag: Not bad at all, actually. Ok, we didn’t get a t-shirt, but we did receive an actual bag (with the event logo on), containing a delicious chocolate-covered flapjack, and a packet of Haribo 6/10 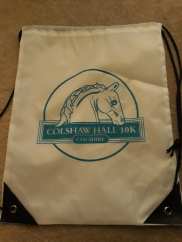 Post-race refreshment: We only received a bottle of water, but that’s because the flapjack and sweets were in the goody-bag. Still, when my previous post-race refreshment has comprised the likes of bread and fruit, I didn’t feel like I was missing out. Wouldn’t have minded a big tray of jelly babies, like they had at Oulton Park and Poynton though. 5/10

Meaning a total score of  52/70 (or 74%) – a very impressive score, meaning Colshaw Hall is now top of my leaderboard:

Amazingly, the race which nearly killed me is still doing rather well near the top of the table. Maybe I should enter it again next year?

My next race is a week on Sunday, in Alderley Edge. If you’re local, feel free to pop down and cheer me on. If not, you’ll just have to donate instead, won’t you?! 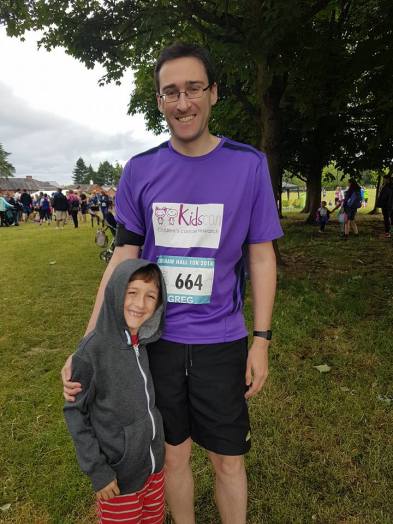 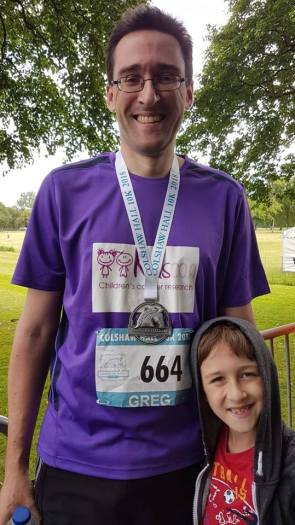 (Isaac was there, but refused to pose)