On Monday, the televisual juggernaut that is ITV’s Love Island rolled back into town for a brand-new series.

Despite having never watched it before (well, I watched Celebrity Love Island about a decade ago, but all I remember is Jayne Middlemiss having a breakdown, whilst trying to mount anything with a penis for two weeks – including Calum Best, who appears to be nothing more than a tanned penis with nice hair), I think I have a pretty good idea of the format.

The fact I have never watched Love Island has nothing to do with snobbery – because I thoroughly enjoy Take Me Out and Celebrity Juice, which are hardly highbrow – it has just never really appealed to me before. It still doesn’t, frankly, but I have chosen to give it a try, purely for experimental purposes.

My reasons for taking on this challenge (and it is a challenge), are:

If science lessons at school taught me anything, it’s that I should watch at least a week of Love Island to form a balanced view; but since my blog is always posted on a Friday, and because I genuinely fear for my mental health, I have decided to just watch the introductory show, where we meet this year’s guinea-pigs.

If, by some miracle, I love it, the experiment may be extended; but I am writing these opening paragraphs first, so no promises. To be honest, I suspect my getting hooked is about as likely as Donald Trump getting four more years, or England making it through the group stages of the World Cup, but you never know….

To start, we’re introduced to a Big Brother-style house, where the contestants will live (and love) – only it’s in Majorca, so the weather will be better. The producers clearly selected a Mediterranean island (over the likes of Wight, Man, and Canvey) because there is a far greater chance of the contestants ‘bumping uglies’ if they aren’t wearing much.

The first contestants are both women, wearing what were presumably once bikinis, before they shrank in the wash. As the first in, they embark on the obligatory ritual of high-pitched squealing, despite clearly hating each other already.  Makes sense, as I hate them both too, and I don’t even know their names yet. Ah, here we go…

First up is SAMIRA, 22, from London. She claims to be a ‘performer’, which I initially assumed meant ‘stripper’, but it turns out she has performed actual musical theatre. Now that she has stopped squealing like a mid-orgasm pig, she seems ok. 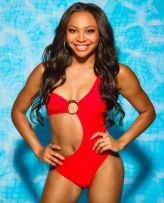 The other girl is HAYLEY, 22, from Liverpool. She is a model (shock), and in her VT explains that she only knows one word in Spanish, which is the word for ‘prawns’ (although she is never tested on this). I’m not sure how much a diet of prawns is going to help her find love though.

When it comes to her own language, Hayley admits she ‘doesn’t use big words’ (another shock), and claims to have only slept with one person – presumably she means today. 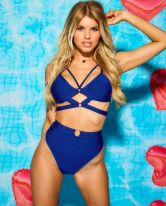 Next to arrive is KENDALL, 26, from Blackpool. She’s quite pretty, but in a ‘Carol Vorderman meets Sophie Ellis-Bextor’ kind of way. Christ, I thought the other two could squeal, but there will be dogs going nuts as far as mainland Spain now. Kendall appears nice, but with a name like that I cannot help but detest her. 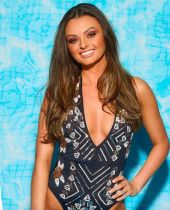 Contestant four is DANI, 21, a barmaid from Essex. Looks thick, sounds thick. I’ve already heard about Dani because, apparently, she is Danny Dyer’s daughter. Yes, Dani Dyer is Danny Dyer’s Daughter (say that three times whilst drunk). She just tried to quote Shakespeare, and got confused. Play to your strengths, love. 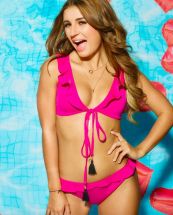 Here’s LAURA, 29, from ‘Scotland’. How delightfully vague, Laura – are you on the fucking run or something? Or do you think those of us South of the border won’t have heard of Falkirk, or Dundee? Laura’s chest appears to have entered the villa a full minute before the rest of her. Honestly, you could hire out her boobs as a bouncy castle for children’s birthday parties. 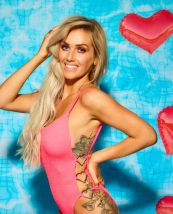 Enter the presenter, Caroline Flack (many have), who has come dressed as Big Bird for some reason. Great, now she’s squealing. I’m going to fast forward (ah, Sky+, whatever did we do before you?)

NIALL, 23, from Coventry is first. He claims to be a student AND construction worker; but presumably he is a police officer, cowboy and native American, depending  on who gets to the Village People dressing-up box first. Niall is obsessed with his hair, has a Harry Potter tattoo, and ‘used to be ugly’ – which implies he finds himself gorgeous now. Prick. 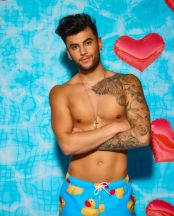 This is interesting (and, by that, I mean ‘not-very-interesting’). Now that Niall has arrived, the girls have to decide whether they are attracted to him or not, by lining up and then stepping forward if they would like to have his babies. I do hope no one moves, and his colossal ego takes a battering…. ah, screw you for stepping forward Kendall (and he probably will).

Boy number two is ALEX, 27, from Wales (another one who doesn’t like to give away his location). Did he just say he’s a doctor?! I half expected him to follow that with ‘a doctor of lurve’; but, no, he’s an actual doctor. 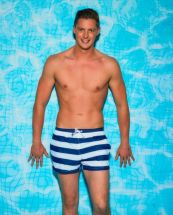 Despite Alex being well-educated (I assume), not a single girl has stepped forward. Hayley even admits that she’s not keen on him because ‘he doesn’t have a tan’. Not that she’s a shallow heartless bitch or anything.

Apparently, Alex now gets to pick from the four girls who rejected him, and he’s opted for Laura. I wonder what first attracted Alex to Laura? Actually, I can think of two things (and the attraction was most likely their gravitational pull).

Next is WES, 20, who only moves in slow motion. He claims to be a ‘design engineer in the nuclear industry’, which sounds important, but since it took him three attempts to even say it, I call bullshit. 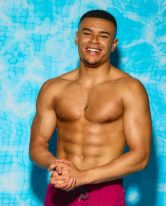 Laura, despite being ‘coupled’ with Alex, has decided she likes the look of Wes more (although I get the impression she’d have preferred a warthog to Alex); so she’s ditched the pasty-skinned doctor for a guy who clearly Googled ‘what sounds like a clever job?’ (then forgot the answer). Alex has been resigned to the ‘subs bench’, apparently, and looks like he might cry.

Dani is talking constantly. I’m not sure why, as she’s only making herself even less attractive, and it was a pretty dire (pun intended) starting point to begin with. She needs to shut up. 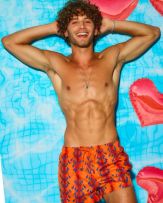 Eyal is a model (obviously), and claims to be ‘spiritual’, because he mistakenly believes this makes him irresistible. All three unattached girls step forward, because in the seven minutes since they arrived, they have become terrified of being left alone. Eyal chooses Hayley (pube-head meet thick scouser, thick scouser meet pube-head).

Lastly, JACK, 26, makes his entrance. It’s hard to see what Jack looks like, because of the tremendous glare from his teeth; but at least no ships will crash into the coast, should bad weather descend. I imagine you’d spot those gnashers from space, long before the Great Wall of China. Jack sells pens for a living, and says ‘innit’ every three seconds. 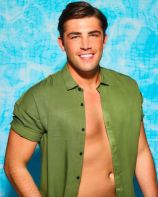 Needless to say, the two remaining girls start fighting over Jack in desperation; visions of being spinsters by their late twenties flashing through their tiny minds – and it’s Samira’s turn to taste bitter rejection, as Jack opts for Dani over her.

Samira and Alex are now (reluctantly) thrust together, as the rejects who nobody else wanted – which is the Love Island equivalent of being picked last in P.E.

Hang on, there’s a sixth lad, which means either the producers are shit at counting (entirely plausible), or we’re about to have more boys than girls. ADAM, 22 (like hell he is), appears to have been chiseled out of granite, and doesn’t he just know it. I don’t think it would be possible for him to love himself any more, if he was licking his own photograph. 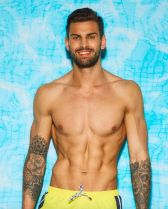 I wouldn’t last two minutes on this show. I mean, I’m nowhere near good-looking enough, obviously, and would probably come across as relatively intelligent compared to this lot (which hasn’t done Alex any favours), but I just don’t have the ego.

This is Greg. He’s 38, but looks and feels 48. He has two kids, has to pee at least once every hour (and prefers to do so sitting down), and his right hip crunches when he tries to climb stairs.

Hang on, did they just say this is on for eight weeks?! The bloody world cup is only four weeks. I can already feel my brain decomposing, and I’ve not made it through episode one yet.

They’re now spending some quality time in their couples. Hayley is trying to pronounce Eyal’s name, but it turns out she struggles with short words as well as big ones. She has managed to say Eyal fifteen different ways (all of them wrong), and with her high-pitched voice she sounds like a cat who is desperate to be let in. She just asked what ‘superficial’ means.

Meanwhile, Laura – who paired up with Wes less than an hour ago (having already ditched Alex) – is now attracted to latecomer Adam. Brilliantly, Laura informs Dani that she fancies Adam, to which Dani replies ‘You fancy him, don’t you? I can tell’. She literally just fucking told you, Dani. Try to keep up.

To win Adam over, Laura appears to be applying vast quantities of blusher to her chest, which could easily result in global shortages of the stuff, if she’s planning on covering them entirely.

I swear, if one more person actually says ‘hashtag’ before something, I’m going to fly to Majorca, invest in a chainsaw, and not regret my actions for a second.

I can’t watch any more, I’m losing the will to live. Sorry everyone, I couldn’t even make it through the first episode.