Last week, I explained how the Whitchurch 10k led to me spending eight hours in Telford A&E, before an overnight stay in Leighton Hospital the following day. 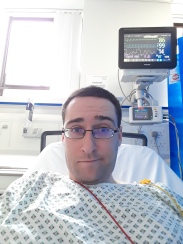 When I was moved to the ward last Monday evening, I was placed in a bay with five very elderly men. I have no doubt they were all the wrong side of 80, and most had probably celebrated their 90th birthdays too. Within minutes of arriving and being re-connected to my drip, I had a very real fear that I was going to be the only one of us to survive the night.

Partly to let my family and friends know I was ok, but mostly to keep myself sane, I decided to post updates of my overnight stay on Facebook…. and here they are.

It turns out that very frail elderly men are not the chattiest of companions, so I’ve decided to appoint myself their leader (despite being the youngest by at least 50 years), in order to motivate the troops through the night. I’m not letting a single one of these guys die on me. 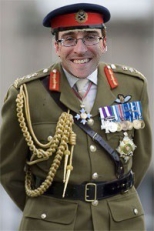 I only know one of their actual names, because I heard a nurse say it earlier, so I’ve had to allocate made-up names to the other four.

To my immediate left, is George (actual name). So far, all he has achieved is going for a piss, but he did so by himself (with the aid of a Zimmer frame), so I have high hopes for George’s survival.

Top left, we’ll call Ronald. I like Ronald very much, because he was the only one to acknowledge my arrival with a cheerful little wave. Ronald has farted loudly twice, and doesn’t seem to mind who knows. Ronald is my kind of guy.

Opposite, is Frank. Frank hasn’t moved at all so far, and I can’t see him breathing. I’m concerned about Frank. DON’T YOU DARE QUIT ON ME FRANK, DON’T YOU FUCKING DARE.

Top right is Aubrey (random, but I’m going with it). Aubrey is also a flagrant gas-passer, but he just shouted about chocolate, and someone called Ian, in his sleep. Aubrey is one to keep an eye on. He’s unpredictable. A maverick.

Lastly, we have, to my immediate right, Donald. He has so far demanded that the lights be turned out (while the nurse was trying to fix my drip), and when she politely replied ‘in a minute’, he called her a ‘fucking ratarse’ – which is not only rude, it’s technically inaccurate. You can only GET ratarsed, Donald, you can’t BE a ratarse. I don’t want to lose any of these guys – they’re my boys – but Donald is pushing his fucking luck with that kind of attitude.

Then, there’s me. The nurses’ favourite, because I am polite, courteous, and the least likely to shit all over them.

George has completed another trip to the bathroom, but I swear he made so much noise trying to get to his Zimmer frame, he’d have made a less eventful exit by simply tipping beds over.

This angered Donald – cantankerous old bastard that he is – to the point he made an elaborate show of covering his own face with a coat. He then struggled to breathe for a bit, and realised what a truly terrible idea that was, so the coat is now on the floor.

I still like Ronald, but he has honestly farted so much, I’m surprised there is any air left in his tiny little body.

Frank has not only farted, he’s also lifted one leg and barked like a dog, so it seems he’s out of the woods and doing ok.

Aubrey is now muttering something in his sleep about crackers.

Me? Well, I’m just having the time of my life.

George has been relatively quiet, since his last noisy visit to the bathroom, but I’ve just checked and he’s hanging in there. Keep fighting, George.

Ronald, on the other hand (real name Freddie, I have discovered) has just caused quite the commotion. He woke most of us around 5.30am by repeatedly shouting ‘Hello?!’ very loudly. I tried to placate him by whispering over ‘Is it me you’re looking for?’, in the hope he’s a Lionel Richie fan, but it turned out one of his fluid bags was stuck down the end of his bed.

He therefore repeated shouting ‘Hello?!’ for a while, and I had to press my orange button to attract the attention of the nurses (although not before Frank had told him to ‘shut the fuck up and go back to sleep’). Following a shaky start, I’m impressed with Frank – he has chutzpah, and you can’t underestimate how important that is in here.

Ronald / Freddie got his fluid bag freed, and then decided to pay a visit to the bathroom himself, but after a few minutes was again shouting ‘Hello?!’ from down the corridor. This time, when help arrived, the conversation went thus:

“Put your pants back on, Freddie, and get into bed.”

I’m worried about Aubrey. He hasn’t moved in a while, and didn’t even murmur when Freddie had his episode. Aubrey is a tough old cookie though, so we just have to hope he has another few hours in him. Wait! He just rolled over. Get in Aubrey, you old dog you.

Donald has also gone quiet, and hasn’t hurled abuse at anyone in a while. Maybe the glare I gave him earlier got the message across. I’m not having anyone upset the troops, not even one of our own.

For my part, I have successfully managed to visit the bathroom, dragging my drip behind me like a true leader.

Keep us all in your thoughts, guys and gals. Not long until sunrise.

We did it! All six present and accounted for. I’m so proud of my boys – what a team effort.

I’ve now learned everyone’s real names, so at the risk of confusing everything:

George = George. He’s in the loo again and, although he still hasn’t spoken, he’s had his obs done and the nurses seem pretty happy with him.

Ronald = Freddie. I love Freddie. After his toilet prank earlier, he then had the following conversation with a nurse while she was taking George’s obs:

“You know those plastic gloves you wear?”

Freddie is my sort of prankster. He’s also hoping to go home today, and I really hope they weren’t lying to him when they said he probably could. Freddie just got himself dressed, and is looking rather dapper.

Frank = Roy. He’s gone quiet again, but I can see his chest moving up and down. He had us all scared for a while, but he’s put in a real shift to make it through the night.

Aubrey = Joseph. Joseph is like a new man this morning. He lost the battery out of his hearing aid a short while ago, but managed to signal to the nurse where he kept his spare, and he’s now fully functioning too. He’s reading the Daily Mail, but I’ll let that slide just this once.

My only issue with Joseph, is that he either has a rubber mattress protector on his bed, or he’s wearing leather pants under there, because there’s a horrible squeaking sound every time he moves.

Joseph’s wife is apparently coming in to see him later. I don’t know whether the others have a gal back home, but it’s nice that Joe has someone, at least.

Donald = Robert. He’s not sworn at anyone in a while, and even let the nurse test his blood sugar. He’s sleeping now, but the rest of us are fine with that for the peaceful running of the operation.

George has finally spoken to accept breakfast. He doesn’t seem very happy, but in this place who can blame him? The rest of us are trying to keep his spirits up.

Freddie is now sat in his chair staring out of the window. An uncharacteristically sombre moment for the Fredster, so I hope he’s ok.

Roy is now more lively, and is demanding a nurse look at his leg. I suspect there’s nothing wrong with it, as they are ignoring him, so I think that’s just his way of making conversation. I’ll pop over in a bit and take a look myself, if that’s what he wants.

Joseph made a fine effort of getting himself dressed, but a less than fine effort of pulling his curtain fully around, so I’ve been trying to avoid the sight of his flabby naked arse for the past ten minutes.

Robert refused breakfast, and when the nurse tried to tempt him with toast, his response was ‘stick yer fucking toast up yer fucking arse’. Heaven forbid I’m in here another night, but if I am, me and Bobby are having words.

My second fluid bag has finished, so a nurse came to take more blood, and pointed out that my birthday is one day after hers. She then asked me to guess how old she was, but if she thought I was playing that game, while she had a needle stuck in my fucking arm, she must be mad.

On the whole, the team are ticking along nicely. And, in the time it has taken me to type this, Joe has mercifully located his underwear.

George was just visited by two physiotherapists. He managed to stand up by himself, but then immediately felt faint and had to sit down. They’ve said they don’t want to push him to do more, and will see him again tomorrow. He was only trying to stand up.

Freddie is sat reading his paper, but he’s been mostly staring into space or mindlessly out of the window. He’s just told a nurse he’s 94, and his wife passed away just down the corridor a ‘few years ago’…. in 2005. He has no clue what year it is now.

Roy is also sat in his chair, not moving, and simply looking down at his lap.

Joseph is in quite good spirits, and just flirted with one of the nurses. He struggled to hear what the lunch options were, but eventually registered that there was pie on offer (I should hope so, as the nurse was screaming PIE at him for a full minute) and his face lit up. He’s looking forward to seeing his wife. He’s another who struggles to get out of his chair.

Robert is hiding under his covers. He’s refused to eat, wash, or get dressed. He looks utterly defeated.

Aside from Joseph, I don’t know whether any of the others have partners or family. They may get to go home soon, but it could be to an empty house. They may not go home at all. Ever.

If you have elderly neighbours who live alone, pay them a visit. It might only take a few minutes out of your day, but it could be the highlight of their week.

As soon as this cannula gets removed, I’m out of here, but most of these guys are staying. Spare them a thought, everyone. You’ve never met them, and it’s highly unlikely that you ever will, but they’re my boys – and what a fucking team we were.

It has been an honour and a privilege leading you, gents. You take care of yourselves.