A few weeks ago, I wrote about the Oulton Park 10k – which was the first event of my 2018 challenge: to run ten 10k races for charity.

Sadly, since posting that entry, my next event at Arley Hall was cancelled thanks to the weather (as Kidsgrove had been in January), meaning that last Sunday’s Poynton 10k went from being my ‘almost-half-way’ point, to only my second outing.

Poynton was an obvious choice when I devised this challenge, because not only is it the village where I grew up, and spent the first eighteen years of my life (before leaving for university), but, as luck would have it, I now commute there every day for work.

However, despite spending roughly half of my life in this Cheshire village, I apparently don’t know most of it, because approximately 70% of the course was completely alien to me. Moreover, if I thought the organisers of the Oulton Park 10k were being economical with the truth, when they described their race track as ‘relatively flat’ (if that circuit is ‘relatively flat’, then the Himalayas are merely ‘a bit bumpy’), Crazy Legs Events – the organisers of the Poynton 10k – took lying to a new level. Anyway, more on that later.

The good thing about taking on a race in the village where I work, is that it gave me the opportunity to recruit some colleagues to join me, and sure enough two of the ladies I work with agreed to sign up. Sadly, one later put her back out and had to… erm, back out; but the other, Clare, took part and finished with a good time.

As we all gathered at the start line, outside Poynton’s ‘Acoustic Lounge’ (the primary cause of my chronic hangover the day before, thanks to my consumption of ALL THE RUM, whilst on a work night out last Friday evening), it dawned on me that this was a much bigger event than Oulton Park just a few weeks earlier. 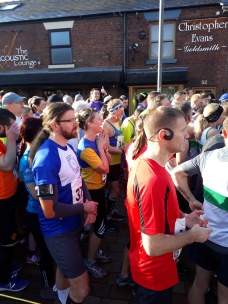 Despite only around 630 runners taking part, of the 750 who had registered, this still made the event roughly three times bigger than Oulton Park, and since my targets for this challenge are, in order: 1. to actually run all ten events and not walk at any point; 2. to run them in under fifty minutes; and 3. to try and finish in the top-third of all entrants, I quickly worked out that I needed to be in the top 210 (revised down from an original 250) to achieve my goal.

One of the organisers then introduced us to a young lady (unfortunately, I can’t recall her name), who had taken part the year before, but with the finish line in sight she suffered a cardiac arrest and collapsed. Thankfully, she made a full recovery, but understandably wasn’t taking part this year.

She was, however, given the ‘honour’ of starting the race, and after a brief countdown (not to mention reassurance that there was a typo on our running numbers, and we were not expected to run ten miles instead of 10k), we were underway.

Having run down the main high street in Poynton, past my office, and around Poynton Pool (none of which I will bore you with, as it will mean nothing to 95% of those reading), we then headed up something called Ladys’ Incline (so named, because Ladys’ Fucking Steep Mountain was presumably too uncouth for Cheshire).  This trail was not only uneven and muddy from the rain the night before (conditions I am not overly keen on), but it was, as the name suggests, uphill.

The uphill part of the race, to my dismay, then lasted for what appeared to be somewhere in the region of 15 miles (impressive for a 6.2-mile race), and as the steepness continued unabated, and the energy sapped from my jelly-legs, I came dangerously close to walking for a bit. No one would have ever known, but as my wife rightly pointed out afterwards when I told her, I’d have known.

Anyway, I didn’t stop (although I ran so slowly at one point, to the naked eye I may well have appeared motionless), and eventually the terrain mercifully leveled out soon after the half-way point, when we joined the Middlewood Way. Again, I won’t bore you with the details or geography of this path, save for two important developments I only learned on the day:

Things you don’t want to encounter whilst running

To make matters worse, not long after I had climbed the steps back to the Princes Incline, and begun down another muddy path (strewn with rocks and tree roots specifically designed to break your ankle), we encountered our next obstacle – a gate. Now, had this been an ordinary gate, it would surely have been left open to ease the passage of 600+ runners; but alas it was a circular gate, very much like this one:

Now, it is hard enough slowing down to try and navigate your way through a turnstile like this, without the added problem of paying so much attention to your feet beforehand (to avoid the rocks and tree roots), that you are not even aware of it approaching, and end up running toward the adjacent fence instead.

As you can imagine, there was much swearing when this happened, not least because there was a marshal positioned by the gate who could have easily alerted me to its presence (I don’t think he appreciated my rather scathing ‘thanks for the warning, dickhead’ as I ran off). To make matters worse, the runner behind me was so close, and evidently also not paying attention, that when I stopped suddenly at the fence, he nearly became intimate with my bottom.

Thankfully, after that minor hurdle, the remainder of the course was all downhill – as promised by the marshals shouting encouragement along the way – and, as the muddy paths turned into beautiful, glorious, tarmac again, I began to recognise my surroundings, and knew I was nearly back in the village centre.

Somehow, despite being utterly exhausted, I forced myself into a sprint finish, and I’m glad I did, as I not only overtook a group of people just before the finish line (the results showed that there were just six seconds separating myself and the ten runners behind me), but I managed to achieve my sub-50 minute target once again.

Ok, my sprint finish did include a slight mishap, where I got too close to the lady next to me, and may have inadvertently elbowed her in the boob, but I apologised profusely whilst crossing the line a split second ahead of her, so I assume all is forgiven.

Having finished the race, I can honestly say I have not felt that unwell in some time, although it transpires this was most likely due to a dodgy Chinese takeaway I had on Saturday night, and not the race itself.

Anyway, adopting the same criteria as before, here is my review of the Poynton 10k:

Cost: £16.00 (quite reasonable compared to some of the events I have entered)

And now for the ratings…

Course: Just horrible. Ok, some of it was scenic, and I guess it was more ‘interesting’ than doing three laps of a motor circuit (once you’ve run one race track, you’ve run them all), but it ranged from pavements and roads (my preference), to muddy paths strewn with all manner of obstacles, and the first three miles or so were almost exclusively uphill. It was, however, well-marshaled (gate-wanker aside), with lots of support from the locals, and that’s about the only good thing I can say about it. 5/10

Weather: Dry, sunny, and only slightly chilly. Close to perfect 8/10

Organisation: Plenty of pre-race information, and relatively well-organised on the day, but they should have informed us sooner that mp3 players were banned (I hate running without music), and the road closure in the centre of the village – despite being well publicised in advance – apparently ended up with various incidents of road rage 7/10

Official Photos: None. Well, there was a sports photographer present, but apparently they charge £1.50 per digital download, and if I want to see myself looking like shit, I can go to a mirror for free, so they can piss off. Thankfully, my wife and other runners caught a couple of snaps, including one of my photo finish alongside the poor lady I elbowed: 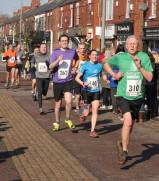 Photos 1 and 2 courtesy of Carl Ryder

I also managed to persuade my colleague, Clare, to have her photo taken with me after we had both finished the race, but since she made me promise I wouldn’t put it online, I have cleverly altered the photo to preserve her anonymity:

Unfortunately, I can only judge the official photos on the small copyrighted thumbnails I found online – 2/10

Medal: Smart, metal and the middle bit spins round. Cool. 8/10

Post-race refreshment: Poynton redeemed itself here, because although we were given tiny plastic cups of water, rather than bottles (so I took two), they not only provided mountains of jelly babies to boost our energy levels, but trays of deliciously gooey flapjack too. Top work 9/10

Which gives Poynton a score of 39/70 (or 56%), and places it second, well behind Oulton Park. No amount of nice weather and flapjack, is going to make up for the lack of any souvenir (aside from the medal), a course that damn-near killed me, and a marshal who let me run into a fucking fence.

Next is the Whitchurch 10k a week on Sunday. As ever, if you’d care to throw some spare change towards a fantastic charity, here’s a link to my Just Giving page:

Thanks for reading, folks x