A couple of weeks ago, I took part in my usual Parkrun event in Congleton, and I would like to share with you what happened.

For those unaware, Parkrun is a charity which organises 5k running events all over the world every Saturday. From humble beginnings in 2004, there are now nearly five hundred events around Britain, a similar number elsewhere across the globe, and more than four million runners registered worldwide.

If you are getting somewhat weary of me writing about running, then fear not – this entry is less about running, and more about one man’s struggle against adversity, the elements, his own ineptitude, and an elderly man in a red bandana.

In truth, I am very, very proud of myself for even going to Parkrun the Saturday before last, because – those of you in the North of England may recall – the weather was apocalyptically bad. When I woke up around 7:00am, and cast a cautious glimpse through the curtains, the scene which greeted me was not dissimilar to something from The Day After Tomorrow.

The conditions, together with my crippling indecisiveness, caused me to change my mind at least ten times about whether I was going or not.

Whilst weighing up my decision, I reminded myself that I always feel a sense of achievement when I’ve finished, and I certainly need to keep my competitive running going, if I hope to complete the 10 x 10k challenge I’ve set myself for 2018. Plus, I still need to shed some paunch, so a failure to go to Parkrun, would mean a longer run the following day to compensate.

On the other hand, I had to consider my health, because I needed to spend three nights in Newcastle for a trial the following week, and didn’t want to jeopardise that by making myself unwell running in Arctic conditions. In fact, the more I glanced out of our living room window, the more it dawned on me that there was every chance this Parkrun could fucking kill me.

Such is my inability to make decisions, I got into my running gear and as far as the front door, before a blast of icy air caught me right up the shorts, and I sheepishly headed back upstairs to my family. I couldn’t bear the thought of our boys growing up without a father. I had to stay at home for them.

Of course, my wife then gave her very finest ‘it’s up to you, dear, whatever you think is best, no one is making you go’ performance, which might as well have been ‘get out there, and stop whining like a bitch’, so my final decision to remain home was immediately reversed, and I found myself leaping from the house to the safety of our car (a distance of roughly six feet), then sitting on the drive and wondering what the hell I was doing.

The short drive from Sandbach to Congleton was horrendous, with rain and sleet lashing against the windscreen (so much so, I had to increase the wipers from ‘constant’ to ‘fuckinell’), and there were cars passing me with an inch of snow covering them.

Even once I had parked up at Astbury Mere in Congleton, it took every ounce of my strength to not turn around again and go home. As I put my running shoes on, and opened the car door, I seriously questioned my sanity.

I was apparently not alone, because once I had jogged the half lap around the lake to the start line (partly to warm up, but also because my indecisiveness had made me a little late), the general conversation was that this was all a terrible idea. Not one person was looking forward to running – even though, by this point, the sleet had mercifully stopped.

My mood was not improved by the fact my arch nemesis, ‘Bandana Man’ (not to be mistaken with 1980’s cartoon, Banana Man), then arrived, looking all smug and confident. For the record, not only is he probably a nice guy – we’ve never actually spoken – but I have no reason for disliking him, other than the fact he constantly finishes just ahead of me (which is not really a reason to treat someone as your mortal enemy). Still, he was grinning, and in that weather no sane person should have been grinning, so for once my hatred was justified. Plus, he always wears a bandana, for fuck’s sake.

Following the usual introduction from the ‘Race Director’ – which involves a description of the route for any first-timers (‘three laps around the lake, keep the water on your left…’), a round of applause for the volunteer marshals, and an instruction to let faster runners overtake – we were counted down from 3, 2…. and, at that precise moment, what I can only describe as ‘end of the world hailstones’ began striking us with a vengeance…..1.

I have never had so little motivation to run in my life, except for perhaps the half lap around the lake back to my lovely warm car so I could drive home.

My mood was not improved when, shortly after setting off, one of my fellow runners refused to keep to the left (despite the firm instructions less than a minute earlier), and because there was no space to her right, I was forced to undertake – straight through a huge puddle, which completely submerged my left foot.

The remaining two-and-three-quarter laps were spent with my face being lashed by freezing rain, while my foot squelched, and my chest pounded as I struggled to breathe the icy morning air.  Such was my agony and misery, the only way I could get through the final lap was to count my own breathing as a distraction.

When I finished, I stopped my trusty Casio, and was pretty delighted that I had achieved my second fastest Parkrun ever, despite the terrible weather conditions, and the fact I had consumed an entire bottle of red wine the night before.

My glory was, however, fleeting.

Firstly, having passed through the finish, I immediately headed for my usual wooden post, which I like to lean/collapse on, as I try not to vomit or cough up a lung. Essentially, it keeps me upright just long enough to compose myself, thereby avoiding an embarrassing fall into a bush.

Except, on this occasion, some utter bastard had beaten me to it, and because I needed to lean on something quickly (before I fell down), I made a snap decision and clung to a nearby bin instead. It wasn’t until, a few seconds later, when I noticed a few runners looking at me, and the sudden stench of dog shit burning my nostrils, that I realised I was hugging no ordinary bin.

Sadly, my embarrassment didn’t end there.

If you have never taken part in (or attended) Parkrun before, let me explain how the timing works. Everyone sets off together, and once you have finished the 5k, you collect a small plastic tag with your position and a barcode on.

You then take this, along with your own personal barcode (which is sent to you when you first register), to one of the volunteers behind the finish line, who scans them both to register your time.

NB: This is an example I found online. I do not run under an Indian pseudonym

Until two weeks ago, it had never dawned on me that a paper barcode would not mix particularly well with rain, but as I prized myself away from the dog bin, and put my hand into my soaking shorts (it was raining heavily, remember, I hadn’t pissed myself), I slowly pulled out clumps of murky pulp, and realised I had been rather foolish.

To make matters worse, I did this in front of one of the volunteers, who looked at me and said “I don’t think I can scan that.”

Utterly despondent, I squelched over to the Race Director to explain what had happened, and he unhelpfully suggested I should have laminated it. In response, I wanted to explain that I had contemplated doing this when I first registered with Parkrun, but thought it was better to simply print lots of copies, and then replace them when they became worn; naively forgetting – to my embarrassment – that rain would completely destroy them within minutes.

Sadly, in my exhausted state, all I could manage was a pitiful wail, like a wounded animal (I’d intended to at least say ‘I know’, or ‘I will’, but even that proved too articulate for my current oxygen levels). Afterwards, I wished I’d quipped something vitriolic, like ‘go laminate yourself’, but you always think of these things when it’s too late, don’t you?

I did, however, manage to explain – via a mixture of grunts and hand signals – that I had a spare barcode in the car, and would go fetch it. So, having squelched the half-lap back to my car, collected a replacement barcode, and returned to hand it to the Race Director so he could record my time, I finally headed home.

I have never longed for a hot shower so much in my life, and as I stood there, the water slowly reviving me, I couldn’t help but notice that my body was ruined. My legs and feet were dark brown, yet the rest of me was ghostly white. It was like I was a character from that board game, Misfits, and had been created my mixing the legs of 1980’s Michael Jackson, with the torso and head of 1990’s Michael Jackson. 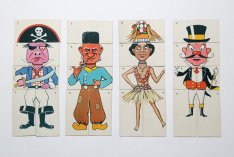 That is, all except for my belly, which was inexplicably red raw. As I stared down, all I could think of was the scene towards the end of E.T., where everyone thinks the little fella has sadly passed away, and then his stomach starts to glow with life.

And, speaking of little fellas, as I stared at my belly, something infinitely more worrying struck me. Such was the impact of the freezing weather on my body, my penis had gone from an ‘outy’ to an ‘inny’.

Fear not, ladies, normal service has since very much resumed.