I’ve set myself a challenge for 2018. Yes, I know it’s a little early for New Year’s resolutions, but once the X-Factor live-shows start, it’s basically Christmas, right?

I’ve undertaken some stupid challenges in my time; however, generally speaking, I have always ended up being proud of what I achieved, usually because I was raising money for charity at the time – and you can get away with some pretty weird shit when it’s for a good cause.

“I’ve decided to hop to work on Thursday, dressed as Scooby Doo.”

“I know, but I’m raising money for The National Association of Disabled Great Danes.”

In 2001, I watched all the James Bond films back-to-back (up to, and including, The World Is Not Enough), with a good friend of mine from Law School – we’ll call him Gerard because, well, that’s his name. It took us forty-three hours (without sleep) and, from a medical point of view, I believe our condition at the end of the ordeal would be best described as ‘a bit fucked-up.’

I can only take my wife’s word for this, because I have very little recollection of events from the start of Goldeneye onward, other than a vague memory of me being topless, and trying to mould a third nipple (in homage to Scaramanga’s anatomical abnormality in The Man With the Golden Gun), from some dampened pink toilet paper.

It’s no wonder I never heard back from that Blue Peter audition.

Then, in 2008, Gerard persuaded me to join him in a charity abseil, down the side of the Europa Hotel in Belfast. At 51 metres high, The Europa boasts (if ‘boasts’ is in fact the right word) the title of being the ‘most bombed hotel in the world’ – and I threw myself off the side of it (admittedly attached to a rope, I’m not a complete moron).

To make matters worse, I was chronically hungover at the time, and still suffering the effects of a dodgy Lebanese kebab that I had drunkenly scoffed the night before. The people of Belfast will never know how close they came to literally being ‘shat on from a great height’.

I sometimes question why I remain friends with Gerard, because he is clearly not very good for my health (mental or physical), but he and I are very similar in many respects. In fact, we share so many common interests, the only clearly distinguishable difference between us (other than physical appearance – and even then, with the exception of his facial hair, we are not overly dissimilar), is that he is, without doubt, psychologically unhinged.

He’s like my reckless, sociopathic, death-defying alter ego from Northern Ireland. If it turned out that he is in fact a figment of my sub-conscious (a little like the Edward Norton / Brad Pitt relationship in Fight Club*), I would not be entirely surprised. I may, however, question why my psyche has given him an accent that I couldn’t fully understand for the first few months of our friendship. 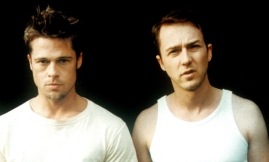 (*belated spoiler alert. Sorry if you’ve not seen the film, but it’s been out nearly twenty years, so you only have yourself to blame. Oh, and Bruce Willis is a ghost in The Sixth Sense, too. Oops.)

Partly because Gerard lives in Ireland, partly because we both now have families to look after, and partly because (as my wife constantly reminds me), prolonged exposure to some of Gerard’s ‘suggestions’, would almost certainly result in my boys growing up without a father, we haven’t seen each other in a few years. It’s probably for the best though, because the last time I spoke to him, he was still harping on about us kayaking down the River Lagan in Belfast, dressed as Mel Gibson’s William Wallace character from Braveheart. I’m not even sure why.

Anyway, as usual I digress. The bottom line is, I still like to set new challenges for myself every now and then (e.g. getting more than three hours of sleep, eating an entire packet of chocolate Hobnobs in one sitting, climbing a flight of stairs without developing back/knee/chest pains, etc…), but with one important distinction: I won’t be attempting anything dangerous. As such, skydiving and bungee jumping are definitely out of the question, as is swimming with sharks, cliff diving, and going to Port Vale away ever again.

These days, as I hurtle towards middle-age, I prefer my charity escapades to be feats of endurance, rather than anything which might result in serious injury or death. So, with that in mind, I have previously organised sponsored walks to away football matches (Macclesfield in 2013, and Hyde in 2015), as well as last year’s ‘Big Road Trip’, which involved myself and another good friend (who we shall call Gareth), driving 1,000 miles around the country, visiting twenty-eight football grounds in one weekend.

Our adopted good cause for these previous events, has been a children’s cancer charity based in Salford, called ‘Kidscan’. I first became aware of Kidscan, through my dealings with an online Stockport County fans’ forum in 2013, and since childhood cancer was affecting my wife’s family at the time, that’s when I took the decision to organise the first sponsored walk.

For my latest venture, I wanted to depart from anything to do with County (partly because there are no convenient away fixtures that we could realistically walk to this season – at least, not without a risk of snow – and partly because I simply fancied a change of direction), so I decided that my new hobby of running might be a suitable platform. Actually, ‘hobby’ implies that I enjoy running, whereas I merely tolerate it, in order to halt the advancement of middle-age spread. In all honesty, I am to running, what Boris Johnson is to foreign relations. Or running.

Having ruled out some kind of distance target (in my sleep-deprived state, I genuinely/naively Googled ‘how far is it to the moon?’, and then immediately dismissed the idea, when it transpired I would need to average 654 miles a day, for the entire year, to achieve my goal), I began considering other options.

Then, in a moment of weakness, I thought back to my first ever 10k race in September. At the time (and for a few days afterwards), I was telling anyone who would listen that I would never do it again. With aching limbs (and moderately tender nipples), still very much fresh in my memory, I had more chance of entering Iraq, or Katie Hopkins, than another 10k event.

However, time is very much a healer – of both memories and nipples (note to self: consider ‘Memories and Nipples’ as potential autobiography title), and it wasn’t long before I questioned whether I had been prematurely dismissive of competitive running. Maybe  I could grow to love it. Perhaps this was my sport after all. Perhaps I could still – even at my advanced stage of life – become one of the world’s great distance runners?

Ok, fine, if I’m honest, I just want more shiny medals to add to my collection (of one). Does that make me a bad person? No. If anything, it makes me a fucking magpie.

Then, one morning, I settled on the idea of running a number of 10k races throughout 2018. I briefly contemplated a challenge of doing one a month, but found this not only difficult to organise (I wanted to keep the events local, and there isn’t quite one a month in the surrounding area), but I also might need some flexibility in case of injury etc. So, having changed my plan slightly, I decided to try and run 10x10k instead.

The more I investigated the various running events throughout the calendar year, the more I realised that they all see it as one big competition between themselves, as they battle to be the best 10k event in Cheshire (not that such an accolade actually exists).

The ‘Knutsford 10k’ organisers claim to have the prettiest course and the biggest medal; the Alderley Edge 10k may be boring (the route essentially takes you down the ‘new’ bypass and back again), but is largely flat and promises the fastest times, not to mention a t-shirt in your goody bag at the finish; the ‘Poynton 10k’ is apparently like an assault course, with a route that includes some steps and a stile (although I do not necessarily consider this to be a good thing, as it’s meant to be a 10k race, not fucking Ninja Warrior UK).

In fact, each of my local 10k races seems to boast something the other’s don’t have, as if fickle sods like me are only attracted to material items and gimmicks, rather than the sheer love of running (ok, they got me, I’m only doing this for the silverware).

Each of the races I looked at, within a 25 mile radius of Sandbach, had their own individual appeal, with the exception of Market Drayton. Not only do they keep the contents of their goody bag a secret until the day of the race (how can I tell if I want to run their stupid 10k, until I know what I get at the end?), but the wearing of headphones is ‘strictly forbidden’ (despite it being a perfectly safe, fully road-closed, course) and results in instant disqualification. Well, Market Drayton 10k, I don’t care if you ‘sold out within 24 hours’ last year, as far as I’m concerned you can piss off with your shitty secretive goody bag, and I’m not running unless I can have music to distract me from my burning nips.

I’ve already paid the entry fee for five races: Kidsgrove in January, Poynton in March, Whitchurch in April, Knutsford in June, and Alderley Edge in July; and I have four other definite races pencilled in, which aren’t currently open for registration (including a repeat of the Sandbach 10k next September). For my tenth race, I am toying with the idea of a trip to see the in-laws in Norwich next August (which would be the largest event by some margin – several thousand runners, in fact), but there are a few alternative options if that doesn’t work out.

For now, I’m just eager to get going, as I think I’ll be less apprehensive when I have the first few races under my belt by Easter. All details – which will be updated as I go along – are contained within my JustGiving page, https://www.justgiving.com/greg10x10k, and if you feel like sponsoring me nearer the time, or joining me at any of the races (or both), well that’d be just grand.

And the best part about all of this? That’s at least ten blog entries for 2018 already.

One thought on “Blogged Determination”