Last Saturday afternoon, Ollie, our eldest son, was one of the matchday mascots at my (our) beloved Stockport County. 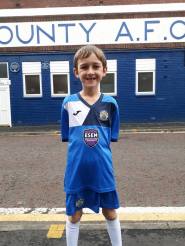 As part of the mascot package that I treated him to, he received the full home kit (see above), went on a tour of the ground, and then got to meet the manager and players, before walking out with the team prior to kick off.

The tour included the Directors’ Box, Boardroom and Sponsors’ Lounge, not to mention a visit to our brand-new museum, and a glimpse – for that was all that was required – of County’s trophy cabinet. I would love to say it was a trophy room, but we barely have enough silverware to fill a small cupboard, so a whole room would have been entirely unnecessary, and as sparsely populated as Kim Jong-un’s imminent funeral.

In the changing room, Ollie got to meet the entire squad, add to his collection of autographs (which included telling certain existing – and rather despondent looking – players, that he didn’t want their autograph, without going on to explain that this was because he already had them from last season), before posing for photos. 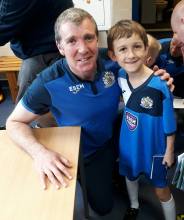 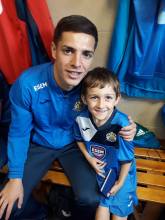 Admittedly, there was an element of being somewhat star-struck, tongue-tied and shy, but once I got over that, I managed to speak to some of the players (and our manager, Jim Gannon) with a moderate amount of composure and decorum.

Just look at his little face (Ollie seems quite chuffed too)

Following the tour, Ollie was then allowed to warm up with the players on the pitch, before being ushered (along with the other mascots) down the tunnel shortly before kick-off, so that he could walk out with the team alongside his favourite player – and County’s current top scorer – Jason Oswell.

In Ollie’s words, it was epic. It really was.

Look, I know what you are thinking, and no, this was not some pathetic attempt to re-live my childhood through my son. Ok, sure, I wouldn’t mind being a mascot myself, but at 37 I rather feel my opportunity has now passed, and it would almost certainly look like I was leading the player out onto the pitch, rather than the other way around.

I assure you, Saturday was entirely Ollie’s idea, and something he has wanted to do for a long time – much in the same way that (although he perhaps doesn’t know it yet), he really wants a Lego Millenium Falcon for Christmas.

I don’t really understand why Ollie was so desperate to walk out onto the pitch with Jason Oswell, though. Don’t get me wrong, I’ve met Jason twice now, and a nicer bloke you could not wish to meet, but he only signed for County a couple of months ago, and there were players in that changing room on Saturday who have been tremendous servants to the club over the past few years.

Had I been the mascot (ah, if only), I would have almost certainly wanted to walk out onto the pitch with our goalkeeper, Ben Hinchliffe. Please don’t think for one second that this is because I am in some way attracted to him (although, like myself, he is quite the dish), but I was a goalkeeper throughout my playing days (after school, 4-6pm, Deva Fields, Poynton, jumpers for goalposts, isn’t it?, marvellous), and so I have always felt an affiliation to ‘the man between the sticks’.

I think this is because the goalkeeper is often the understated hero. The rock at the heart of defence. The last bastion of the team. In much the same way, I have always fancied being a drummer, rather than a lead guitarist or singer. This is because I enjoy being a leader from the back, commanding my troops into battle (whether in a sporting or musical arena).

Ok, that’s a lie. The truth is, I have always fancied being a drummer, because I really want to be in a band, but can’t sing, and have no musical ability whatsoever (apart from a surprising amount of rhythm). Equally, the only reason I was ever a goalkeeper, was because I was shit at football, but freakishly tall.

Sadly, when you are seven years old, being a goalkeeper is not always considered the most glamorous position on a football pitch, because you want to be the player scoring all the goals. The star. You are drawn to what excites you, and for some inexplicable reason, that means you would rather scuff the ball home, off your shin from two yards out, than pull off a fingertip save in the final minute of the match, to preserve your team’s 1-0 lead.

Being a seven year old boy (or girl for that matter) is usually about three things: scoring goals, dinosaurs, and space. Often, because of those obsessions, you make some questionable life choices (like when Ollie recently had the chance to watch any Bond film of his choosing, and he selected Moonraker, purely because it is set in space – he soon realised his mistake). In time, he will learn to appreciate the finer things in life: a good red wine, mid-afternoon naps, goalkeepers, and Holly Willoughby (for I feel certain she will still look good in around ten years’ time, when he realises all girls do not, in actual fact, ‘smell’).

County normally only have four or five mascots for most home matches, for but some unknown reason our fixture against North Ferriby proved extremely popular with the younger fans, to the extent there were no fewer than thirteen of them on Saturday. This was, in itself, quite impressive, but made even more amazing (or amusing), when you discover our opponents attracted just eight travelling fans.

Ok, North Ferriby is some distance from Stockport (for those unaware, it is near Hull), and the village – yes, County play village teams these days – has a population just shy of 4,000, but their away following was outnumbered by our mascots. So, whilst County had too many children walking out onto the pitch to ensure they could each have a player to themselves, if North Ferriby’s entire away following had decided to walk out with the players prior to kick off, they would have been three fans short.

Look, I accept they are very firmly rooted to the bottom of the league, and a two-hundred-mile round trip to watch your team almost certainly get beaten (which they did, 4-1) is never appealing, but then again neither is Hull. I have been to Hull (just the once – and I think it was shut), and whilst North Ferriby happens to be a quaint little village, nothing like it’s larger neighbour, I would stop at nothing to get as far away from Hull as possible – even if that meant traversing the country to watch my football team get humiliated, and even if it meant going via Bradford to do so.

As such, I think the eight poor souls who made the journey should be applauded. In fact, there were only seven of them as the game kicked off, since the eighth fan was evidently caught in traffic, and he arrived shortly before half-time, by which point his team were already trailing two-nil.

There is nothing quite so heartbreaking (read: secretly hilarious), as watching a stressed man hurry into a football ground, upset that he has missed half of the match due to traffic, only for him to glance expectantly up at the scoreboard, notice the score, and slump into one of the many vacant seats, completely dejected. I shouldn’t have laughed, I know I shouldn’t, but I swear a little wee came out.

I instantly felt bad for finding the situation funny, but in my defence it is extremely rare for Stockport County fans to have the opportunity of looking down on another team these days, and we have suffered more than our fair share of jibes and jokes in recent years. In fact, I seem to recall some North Ferriby fans bragging when they got promoted at the end of the 2015-2016 season, only for them to come crashing straight back down after just one year. Karma, it seems, can be a bitch sometimes.

The main thing is, I had a great day (and, of lesser importance, so did Ollie). Even my mum and sister, who have not been to Edgeley Park in years, but wanted to watch Ollie on his ‘special day’, seemed to enjoy it – despite paying so little attention to the actual match, that they missed at least one of the goals. In fact, my dear mother informed me part way through the second half, that the last time she had seen County play, she was pregnant with me. That would have been during the latter stages of 1979, or very early 1980. Let’s hope it’s not another 37 years before her next visit.

Watching the game last weekend, which admittedly County won quite comfortably (without actually playing well), Mum could be forgiven for wondering what the appeal of our little team is, and why Ollie and I still get giddy with anticipation every other Saturday morning. The truth is, I’m not entirely sure.

I suspect, once you fall in love with a football team, it’s like hard drugs (not that I have ever tried drugs) – you know it’s bad for you, potentially harmful to your health, and seriously bloody expensive, but you just can’t help going back for more, week in, week out. It’s an addiction.

This is no doubt easier to understand, when you look at fans of successful Premier League teams, compared to a club currently residing in the sixth tier of the English game, but that doesn’t mean our passion is any less. If anything, our fans are even more committed (or, from a psychiatric perspective, probably should be), because the appeal of watching County is, in theory, a lot less.

Thankfully, Ollie gets it. He understands that his football team is utterly crap right now (albeit not quite as crap as North Ferriby), but they will still always be his football team. My only hope is that, one day, Isaac will also become infatuated, because at the moment he doesn’t seem to quite grasp the (not so) beautiful game.

How do I know this? Well, during the second half on Saturday, he firstly announced to everyone around us that ‘football is boring’, then decided to ‘rest his eyes for a bit’, before finally asking Ollie which one of our players was Messi.