I know it’s customary for the person travelling to send a postcard, rather than the person stuck at home with their kids, but since you’re on a school trip with forty-four teenage boys, I figure you’re busier than me (twenty-two times busier, to be precise). Plus, if one of the lads in your care has an accident, there’ll be all sorts of paperwork to complete, whereas if (when) one of ours hurts himself, I’ll probably just laugh for a bit.

How’s Munich? Was security ok at the airport? Any rectal exams?

You’re probably knackered, having been up since 2am, but I don’t want you to think it’s been easy for me either. I’m not sure if Isaac was already in our room when you left, but when I woke with a splitting headache around 4am, and went downstairs to get some paracetamol, I damn near tripped over the little git, as he was curled up on the floor by our bed.

It was only at the last second, as the pungent fumes of shit alerted me to his presence in the shadows, that I realised he was down there, and I had to execute an emergency ‘lunge’ to avoid standing on his fucking head.

I added a pack of wipes and a pull-up to my downstairs shopping trip, and when I returned, I had to give careful thought as to how I was going to change him. After all, I didn’t want him to wake, and he was already restless (and mumbling something about poo-poo).

Imagine my surprise when, having unfastened his pull-up with all the delicate care of a bomb-disposal expert, it transpired he hadn’t crapped at all, but had instead emitted a fart of such noxious toxicity (noxicity?), it had not only permeated the entire top floor of our house, but remained there until about 4.45am (it may have survived longer, but I drifted back to sleep).

When my alarm went off at 7am, I half-wondered if I had dreamt the whole experience, and would have to now battle the sort of concrete encrusted turd that can only be chiseled off in small chunks with a screwdriver. But, no, it had indeed been a phantom crap of biochemical proportions.

I then managed to get both boys fed and dressed (Ollie successfully clothed himself in a PB of nine minutes) and we dropped Isaac off at nursery on time. #winning

Ollie and I then returned home to do his reading (why on earth has he brought home a book about rock pools? I now know more about crabs than a Magaluf holiday rep), practice his spellings, and put the finishing touches to his appearance. Well, I spent five minutes wetting his hair to try and get that damn tuft to stick down, while he focused on spreading more toothpaste onto the front of his shirt than his actual teeth (I made him keep the shirt on, as punishment for being such a dickhead).

Tonight was more successful, as Isaac was asleep by 7:30, and aside from a major meltdown at dinner, when he wanted “ALL THE KETCHUP!”, I haven’t wanted to strangle him once. Ollie is still awake, reading quietly in his bed (and, by ‘quietly’, I mean ‘with all the stealth and grace of a pregnant hippo in heels’), but we’re surviving. 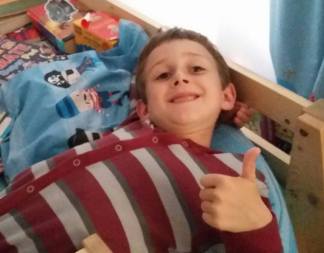 Having got him to sleep with just one reading of ‘Night Pirates’ yesterday (I don’t even bother turning the pages now, as I know the fucking thing off by heart – and clearly so does he, as he was mouthing the words while he drifted off), I had hoped to have a relaxing evening.

I planned to do some tidying and cleaning, then watch that third Hunger Games film I recorded. I even grabbed a midweek beer, to toast a successful evening of single-parenting.

But, bugger me, those films are bleak. I genuinely don’t think I could have depressed myself any more, if I’d worked my way through Radiohead’s back-catalogue, while looking at photos of deceased relatives.

It was honestly so melancholic, I had to pause at one point to do some dusting to cheer myself up. It was only when I was completely satisfied that all thoughts of self-harming had dissipated, that I went back to watch the rest.

Then, just as the film got exciting with about fifteen minutes to go, Isaac woke up and started crying. I tried to persuade him to stay in his bed, and reminded him of the Thomas The Tank Engine train he had chosen from Ollie’s collection as his ‘prize’ if he did, but he was having none of it. In fact, the look he gave me was very much ‘fuck the toy, I’m sleeping in your bed.’

Oh, and did you know there is a train called Mike?! Smug little bright-red bastard he is as well.

In the end, I got Isaac back to sleep in our bed, but every time I crept downstairs to finish the film, I’d get through about thirty seconds before he’d start crying again. I ended up watching the final fifteen minutes of the film in twenty-eight separate instalments. Still, according to my (dodgy) Fitbit, I managed 976 flights of stairs yesterday.

Isaac only woke me once during the night, although that was by forcing his big toe up my nostril. The good news is, I’m getting better with my anger-management, as I managed to stop myself from launching him off the bed in a fit of rage.

This morning, Isaac threw a tantrum because he wanted to eat his cereal in the living room, then he wanted it in the kitchen, then he wanted milk, then he didn’t want milk…. essentially, whatever I did, I was still wrong. Definitely your son.

After a few issues getting him dressed (he insisted on shorts, but the only clean pair we had looked scruffy and didn’t match, so I put my foot down and insisted he wear trousers), we put his shorts on and left on time. Even Ollie managed to get dressed without any major incident.

I took a photo of the boys on the nursery run, to show you what a fantastic job we are doing without you, but that was more for their benefit to be honest, as I don’t want them to see any signs of weakness on my part.

I’ve managed to get Isaac to sleep in just a few minutes again, but all I can hear down the monitor is Ollie reading quietly. I don’t know how he manages to make so much noise with just a magazine. I’m pretty certain I couldn’t make that much noise with a copy of ‘Match’, if I rolled the bloody thing up, and smacked it repeatedly against a giant gong.

Hope you’re having more luck getting your boys into bed.

This is getting like Groundhog Day now, and you’ve only been gone since Monday.

I don’t know whether it’s the heat, or the fact Isaac is an insufferable little shit (I suspect it’s both), but I am only able to tolerate his company for about an hour each evening – and not at all in the morning.

Despite Ollie’s cacophony of reading last night, Isaac was amazingly still asleep when I went to bed, but then he woke and started crying around 2am. I tried to calm him down, and get him to stay in his bed, but the appeal of Thomas train rewards seems to have well and truly worn off, and he insisted on getting in bed with me.

After just a few minutes, he then started screaming to be in his bed, and me shouting ‘this was your bloody idea!’ only made the situation worse. He demanded I follow him, so I explained that, if he was fucking with me (I didn’t use those exact words) and changed his mind again, I would rain down on him with biblical fury (I did use those exact words – he didn’t understand).

Sure enough, within a minute of climbing back into his own bed, he wanted to switch rooms a third time, and that’s when I properly lost it. In the end, it was nearly 3am before we got back to sleep (I might have dropped off first, so for all I know, he was still going).

Despite the lack of sleep, he woke me at 6:30am, because he wanted to see Ollie. I didn’t fully register what he was saying at first, and by the time I realised what was happening, he had escaped, climbed the steps to Ollie’s bed, and was gently waking his sibling by smacking him in the face. As you can imagine, Ollie accepted the rude-awakening with his usual grace and patience.

Breakfast was a disaster, because Isaac alternated between wanting me to carry him downstairs, then screaming if I went near him, which developed into an irrational help me/don’t help me situation with his cereal. Quite how I restrained myself from tipping the bowl over his sodding head is a mystery. 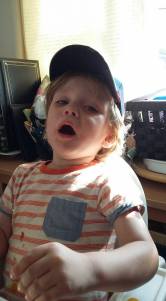 This made us late leaving the house, with the result Isaac looked like he had been dressed by a blind person, then rolled through shit. When we arrived at nursery, he loudly informed everyone he had lost his voice, and would not be speaking for the rest of the day. Irony, it seems, is lost on him.

I did manage to get Ollie to school, with his packed lunch, drinks bottle, snack and guitar, but I spent so long focusing on all the stuff I had to remember, I never noticed he was wearing an age 3-4 top. In fact, I only spotted it this afternoon, when he walked out of class looking like a fucking Britney Spears tribute.

He was in quite good spirits, so we walked into town and treated ourselves to drinks and cake. I suggested phoning nursery to lie about being stuck in traffic, and that I would not be able to collect Isaac until 8pm, but Ollie said that was nasty, so we compromised and went for him at 5.30.

Unsurprisingly, Isaac was exhausted, and kept falling asleep on the sofa, so I quickly bathed them both, and had him asleep by 7.10pm. Record time, but this also probably means he’ll be wide awake again by 10pm. I’ll worry about that later.

I may just survive this ordeal after all, but if your flight home gets delayed, or there is any other reason why you aren’t back on time, that might be the final straw. I’m very fragile right now.