Last Saturday, as we were driving to the Cheshire Ice Cream Farm (which I can thoroughly recommend), Ollie suddenly blurted out from the back seat: “I have a question….”

Ollie is a naturally inquisitive child, so this was nothing new to us, but his questions are usually rather mundane, and don’t require a great deal of thought before answering. Questions like:

What day is it?

Can we go to Pizza Hut?

More often than not, his queries can be answered with one or two words, and the entire process takes no more than a few seconds. He is, after all, only seven, and whilst he is a very bright and intuitive seven-year-old, he still asks seven-year-old type questions.

As a parent, there are three questions (or genres of question), which I am dreading hearing from my children, and I hadn’t expected to have to deal with any of them so soon.

The first, is about the meaning of life, death, and the existence of God. Whilst I would struggle to know where to start with this line of interrogation, it is at least a topic where my wife and I could try to answer together, as a team. And, by that, I mean she can answer, and I’ll just nod silently in the background.

The second question, is: “Daddy, why are Stockport County so rubbish?” Now, I would not require any assistance from my wife to answer this question (in fact, I would actively discourage her participation), and could happily sit Ollie down for an hour or four, to explain our football team’s current predicament (and who is to blame); but I would be far more concerned about what prompted such questioning, and the potential repercussions of my answer.

My worry would be why he was asking this question, and whether it was indicative of him growing weary of supporting County. Hopefully, though, with a carefully focused response, an optimistic outlook for the future, and a repeated warning that if he ever chooses to follow one of the Manchester clubs instead, I’ll personally pack his bags within the hour, I can nip any doubts firmly in the bud.

The third question, and the one I fear the most from my son(s), is the very question he chose to ask us last Saturday, completely out of the blue:

“How are babies made?”

The thing is, I know perfectly well how to answer that question (I have, after all, played a minor part in making two babies now), but I find discussing the topic uncomfortable at the best of times, and especially with my seven-year-old son.

Back when my wife and I were still happy (around 2BC – Before Children), the subject of ‘where do babies come from?’ had cropped up in conversation. Not in the sense that I required an explanation, but more in terms of who would be best explaining sex to our children at the appropriate time.

We (and, by that, I mean my wife) decided that we should stick to our respective genders – she would explain how babies are made to any daughters we might have, and I would be responsible for any boys. I naively agreed, believing my chances to be roughly 50/50 (I have a basic knowledge of genetics), and of course we ended up with two sons. To this day, I swear my wife can only produce boy babies, and knew all along.

Anyway, I am now responsible for explaining procreation to our sons, and I accept this, I just didn’t think I would have to have ‘that’ conversation so soon.

Unfortunately, Ollie asking the question at such a young age, took me completely by surprise, and I rather fumbled my answer. In the end, I told him we would have a proper chat when it was more appropriate (in my defence, the sat nav was making a complete arse of finding the Cheshire Ice Cream Farm at the time).

Thankfully, he accepted the postponement, and hasn’t asked me again since. But, now the issue is on his mind, it’s only a matter of time before he asks again, so I need to prepare myself (with notes, diagrams, and perhaps even a PowerPoint presentation) sooner rather than later.

The thing is, I have no intention of ever lying to him (apart from, you know, the obvious ones about Father Christmas, the Tooth Fairy, and where all his Easter eggs went), but there are certain aspects of conception which he doesn’t need to know at this stage, so I might keep my explanation to the basics. Even then, I get embarrassed very easily, so I will probably find the conversation more uncomfortable than he will.

In fact, I find talking about any delicate issues extremely difficult, and I cannot be as matter-of-fact as some people when discussing sex. So, with that in mind, I have decided to explain to Ollie where babies come from, in the only way I know how – through the medium of song….

How a baby is created.

I promise that I’ll tell the truth,

Throughout our little talk.

So, let’s get one thing straight right now,

There is no frigging stork. 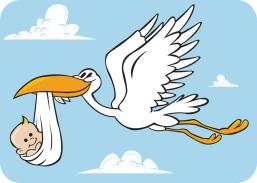 As more and more these days,

Babies can be made and grown,

In many different ways.

But I’ll stick to the basics,

and the act of sex involved.

I hope that once I’ve finished,

All your issues will be solved.

It takes two to make a baby.

A woman and a man.

And avoid them when I can.”

You may think that way now, my boy,

When you’re that bit older,

And you meet one sweet and kind,

Girls are soft and smell nice,

And if you meet the perfect one,

A daughter or a son.

When that day comes, and you choose

To make a baby of your own,

You’ll look down at your willy, son,

And see that it has grown.

It gets all stiff and firm.

And underneath, within your balls,

Are millions of sperm.

One of them will find a way,

To turn into a baby.

Meanwhile, inside the woman,

Each month an egg will form.

And there it waits for just one sperm,

To help it to transform.

“But hang on just one second, Dad,

My sperm are inside me.

So, how do they get to the egg,

Do they travel in my wee?”

Not exactly, but I’m glad,

You asked that question, son,

As here’s the really thrilling part,

Where everything gets fun.

Usually, before you start,

The two of you get nude.

“What, we take our clothes off?

I know you think that now, my boy,

But wait until you’re older.

Each time you meet a pretty girl,

You’ll want to kiss and hold her.

And when you find that special one,

Who’ll let you in her pants,

Not get another chance.

Now, once your willy has gone hard,

You put it inside hers,

And after a few minutes,

Something special then occurs.

All the sperm come rushing out,

And set off on their quest.

But only one will find the egg,

The strongest and the best.

Just let me get this straight:

I put my fishes into her?

Why is that so great?”

Is how it has to be.

Besides, it feels amazing,

And one day, you’ll agree.

Why’s it over fast?”

Enough with all the questions, mate.

“What happens after that then, Dad,

To make the baby grow?”

Well, it doesn’t always work, and,

It’ll be weeks before you’ll know.

But if just one sperm gets lucky,

The egg will start to change.

It moves around inside her,

And begins to feel quite strange.

It starts off really tiny,

But over months it grows and grows

Gets eyes and feet and hands.

“So, if the baby gets quite big,

Then how does it get out?”

It comes out of the lady’s hole,

While she screams and shouts.

And she’ll blame it all on you.

“But even if the sex part’s fun,

The rest just sounds quite silly,

Let no one near my willy.”

But, whatever you do please make sure,

That any baby’s planned.

“So, some babies are accidents?

You can make them by mistake?

For just a few minutes of fun,

It’s quite a risk to take.”

There’s ways to stop it happening,

Though I really have to say,

Can we chat another day?

“But I’ve still so many questions,

And you’ve only answered some –

You’re not explaining this at all!”

This isn’t going to go well, is it?