(So you don’t get the wrong idea, the ‘blog’ part of this week’s title is intended to replace the word ‘gob’ – as in ‘me and my big gob’. I just wouldn’t want you mistakenly thinking I was referring to my knob, that’s all – which IS sizeable, thanks for asking)….

On Tuesday afternoon, I stupidly agreed to give a talk to a group of prospective young law students at my wife’s school, about how to pursue a career as a solicitor, and what to expect if they do. This, for a number of reasons, was a terrible idea.

Firstly, inviting me to talk to people about how great it is to be a lawyer, is like inviting Donald Trump to talk about how fantastic immigration is. I don’t really enjoy it (being a lawyer, not immigration), and so I find it hard to enthuse about the profession to others. I’d probably have had an easier time trying to convince people to support Manchester United.

Secondly, it would be fair to say I am not the world’s greatest public speaker. In fact, it would be even fairer to say, that I am to public speaking, what Professor Stephen Hawking is to the pole vault (I’ve checked that line with him, and he’s fine with it, because he has a wicked sense of humour).

I never really did much public speaking at school, most likely because I was extremely self-conscious about my image, had nothing even remotely interesting to say, and for a large part of my teens, I had the horrible habit of passing out in the most humiliating of circumstances.

I did take part in one speech during sixth form, when a group of us entered the ‘Young Enterprise’ competition, but it didn’t exactly go well. Essentially, our business structure was woeful, our product was fundamentally flawed (we set up a company producing beanbags, which later turned out to be highly flammable – something your average beanbag customer isn’t keen on), and for some inexplicable reason, I was left in charge of writing the script for our final presentation to all the other participating schools in the North West.

Believe it or not, I wasn’t always the comedic legend you now know and love, and some of my jokes were a little off-target. Ok, they were just plain shit. It wasn’t even the sort of speech that should have had jokes in the first place, let alone jokes about beanbags setting on fire (and for reasons which now escape me, unfortunate references to the clergy), so I don’t think the organisers appreciated us laughing our way through it.

Ah well, I only took part in the Young Enterprise competition, so that I had something slightly interesting to put in my ‘National Record of Achievement’ book (which was given to every student in the late-1990s, to log all of their wonderful school experiences, skills and talents – supposedly for the purpose of impressing prospective employers and universities).

By the time I got into the upper sixth form, my NRA was looking woefully barren, because I wasn’t sporty, couldn’t play a musical instrument, had the acting skills of your average Hollyoaks cast member, and had literally nothing interesting going for me (other than the fact I was relatively bright). So, I signed up to run a small business for a year, in the hope it would make me sound entrepreneurial, whereas it only really served to flag me up as someone who flagrantly breaches Health and Safety Regulations (rather ironic, considering what I now do for a living).

I know I’m going off tangent now, but how fucking pointless were those National Record of Achievement books? At the time, I thought it would be my passport into a good career, and would see me breezing through any interviews I happened to attend (“Ok, I don’t necessarily have the qualifications for this job, but I did once take part in a sponsored walk for charity, and I was a ‘sixer’ in my local scout group”). I bet the organisers were so grateful to the National Rifle Association, so that at least they weren’t the most embarrassing ‘NRA’ in history.

That experience of humiliation in front of a large crowd, was enough to steer me away from public speaking for many years afterwards, and in fact I cannot recall another occasion when I was required to speak to a room full of people, until my brother asked me to be his best man about five years ago.

To say that was a different experience to the Young Enterprise talk, would be an understatement. Admittedly, I was in my early thirties then, and had a much better idea of what my audience might find funny (and, unlike the Young Enterprise presentation, this time I was expected to be funny, so it was far less inappropriate to be making knob gags), but my speech went down really well. Really well.

Admittedly, this could have been because the room was largely pissed, or perhaps I just got lucky with my material, but I got loads of laughs, and everyone complimented me on my speech afterwards. It was an incredible feeling, and one I’ll never forget.

NB: Not actually me.

Maybe I wasn’t terrible at public speaking after all? Perhaps I could gauge an audience, and what they might find interesting and funny? All those years of avoiding public speaking – had I been destined to talk to large crowds all along?

No, of course I fucking hadn’t. I don’t know why the best man speech I delivered at my brother’s wedding was so well received, but it sure as hell wasn’t because my material was pure comedy gold, as I had so briefly hoped.

I know this for a fact, because I replicated large chunks of that same speech just a few weeks later, when I was again given the honour of being best man (this time for one of my oldest friends), and I think it’s fair to say that I died on my arse. The jokes which had worked so well less than a month earlier, were met with either silence or, worse, disgusted groans.

As I stood there, faced with mounting disapproval from the wedding party, it dawned on me that later parts of the speech were even more distasteful, so I tried to cut bits out in advance, with the result that none of it made sense. It was horrible, and the experience  – as well as the feeling that I had let my best mate down – still haunts my dreams even now (in fact, I’m developing a cold sweat just typing this).

This isn’t just my negative interpretation/recollection of events, either, because someone I had never met before, approached me in the bar afterwards (as I consoled my battered ego with alcohol), and he simply patted me on the shoulder and offered a sympathetic ‘tough crowd, huh?’

You can see why, returning to the realm of public speaking this week, particularly to a room full of grumpy hormonal teenagers (as all teenagers are), did not exactly fill me with joy. The fact that the talk was optional, and aimed at students who were actually considering law as a career (and should therefore be interested in what I had to say), did nothing to assuage my deep apprehension that I would be faced with something like this: 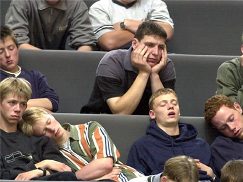 To be honest, I only agreed to do it, because my wife’s school needed a lawyer to come in and talk to the students, they couldn’t find anyone else, and I figured it might earn my wife some bonus points with the powers that be at school (and, in turn, I might earn some bonus points with her – never underestimate the lengths a man will go to, in the pursuit of ‘special time’).

I’m told the talk went well. There were clearly parts where I started to lose their interest, evidenced by the fact I’m pretty certain one of them nodded off at one point, but I managed to salvage the crowd by discussing some of my more interesting cases over the years, and so the talk ended on a relatively positive note.

I told them about the rollercoaster crash I dealt with, where a pigeon decided to end it all, by sticking his – or her – neck onto the rails as a ride approached, causing a loss of power (and one avian head) which ultimately led to an accident – because the ride operator wasn’t paying attention.

I told them about the client who contacted me, because he had been injured driving through a puddle, which sounds ridiculous, but the puddle was so vast it ended up completely swallowing his truck, and turned out to be more of a small lake than a puddle.

I even told them about the elderly gentleman who, when asked for photographs of the pothole that had caused him to trip, as he went to fetch his morning newspaper, chose to also send me photographs of his badly grazed penis. It later turned out that he was only wearing his dressing gown and slippers at the time he tripped and, as he soared through the air, said dressing gown flew open, exposing his shrivelled landing gear to some nasty, tarmac-induced damage. I shall never forget the mental image of him gliding along, like some wrinkly flying squirrel, for the rest of my life.

And, if that mental image doesn’t make you smile too, then there is something seriously wrong with you.

So, having started and finished this week’s entry talking about penises, I think we can all agree on one thing: knob gags are always funny.