I now commute around 12,000 miles a year, and this means that I encounter more than my fair share of utter pillocks on the road (on an almost daily basis).

My hatred of (most) other road users, has got to the point where my wife is now convinced that I will soon perish in a road-related incident – either due to a driving-induced heart attack, or because someone bigger than me has caved my head in with a wing mirror, after I insinuated that they indulge in sexual relations with their own mother.

Please don’t think that I am one of those motorists who is permanently angry and aggressive (well, I kind of am, but not outwardly), as I view road rage as totally abhorrent, but my disdain for fellow drivers has got so extreme, that my wife fears I will shortly utter something totally regrettable, to someone totally regrettable, and this will be the end of me.

I have therefore decided to compromise with her, and I have made a conscious decision to no longer chastise those who are accidentally shit at driving.  Those road users who must have slept with the examiner to pass their test, because there is no way on God’s green earth, that they should be legally allowed behind the wheel. These people are dangerous, don’t get me wrong, but they are seemingly unaware of how poor a driver they are, and we have to hope that their incompetence only results in their own demise, and no one else’s.

That said, I refuse to back down on my hatred of drivers who deliberately behave like arseholes, as there is simply no excuse for it. True, these are the drivers who are far more likely to stave in my bonce with a wing mirror (because the other category will simply drive away, oblivious to the motoring torment they leave in their wake), but they need naming and shaming. If the good, considerate folk on the road – like myself – stick together, we can show them the error of their ways. Of course, they will probably ignore us, and continue being arseholes, but at least we can say we tried.

I have therefore decided to compile a definitive list, of the ten most detestable offences on the road (with the exception of actually killing someone, leaving the scene of an accident, or being in possession of a bicycle, as there is a special place in hell reserved for those folk).

It’s a countdown, so by all means play this in the background while you read:

The most inoffensive motorists in my list (although still the most detestable humans to be placed at number 10 since Thatcher), are those people who, when faced with a queue of traffic, feel the need to move their car a couple of feet to the right, to try and discover what the reason is for the hold up, as if that will make the queue move faster.

Unless they are a doctor, and the reason for the delay is a medical emergency, then whatever they see up ahead, will make no difference to the speed at which they progress.

They may be inoffensive, but they’re still annoying.

Suggested Response: “What exactly did you expect to see?”

I understand that, if you have been trying to get out of a side road, or onto a roundabout, for a while, and there are no gaps in the traffic, it can be frustrating. But let us get one thing clear: sticking the front of your car out, to try and force me to stop, is only going to make me swerve around you elaborately, and hurl obscenities in your direction.

No one, in the history of motoring, has been faced with someone nudging their way into traffic, and thought ‘they’ve obviously been there a while, poor thing, so I’ll slam my brakes on and let them go.’ Your best chances of being let out, in that situation, are to not be a dickhead about it.

Suggested Response: “Stick it out any further, and I’ll take it off.”

Having said that, if you are waiting to turn right out of a side road, or onto a roundabout, and the traffic you are trying to bisect is queuing, it is far more offensive for them to deliberately block your path, rather than let you out, when they are going nowhere themselves.

All they have to do, is bring their car to a standstill roughly ten feet earlier, and they can let you out, meaning that you can be on your way, they are no further back in their queue, and everyone goes home without being called a twat.

Suggested Response: “Well, thank you very much, you twat.”

Some people aren’t very good at parking, and get too close to the lines, I understand that. But no one, unless they have recently undergone some form of frontal lobotomy, can be so bad at parking that they take up two whole spaces, without being aware of their actions. 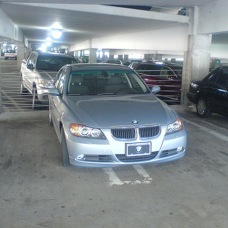 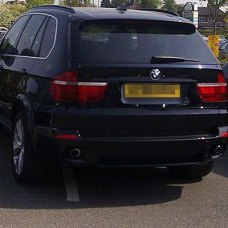 It’s making my blood boil just looking at these pictures (and far be it from me to point out they are all the same make of car).

Suggested Response (if there is someone in the car):

Suggested Response (if there is no one in the car): Wait for them to come back, then see above.

If someone does let you out of a side road, or onto a roundabout, or in any way allows you to proceed before them, it takes one second to acknowledge that act of kindness, with a silently-mouthed “thanks”, a quick raise of the hand, or, preferably, both. If it is dark, and they will not see your gratitude, then a quick flash of the lights will suffice.

If you simply drive away, without giving any thanks at all, then you are a despicable human being, who deserves to suffer many years of misery. May your socks be forever rotated, so that the heel part is near your ankle.

I am well aware that disabled spaces are not solely for the physically disabled – at least, not to the extent that their disability is always obvious – so you should never question a driver’s right to park in a disabled space, purely because you cannot see anything outwardly ‘disabled’ about them.

However, you can often tell from the arrogant and selfish way in which the person has parked in the space, that they are anything but disabled. For example, I will wager that this Corvette owner is not disabled:

‘Disability’ is a broad umbrella, which covers many restrictions, but ‘stupidity’, ‘ugliness’ , and ‘wearing a tracksuit’ are not three of them.

There can be no such ambiguity when it comes to ‘parent and child’ spaces though. You either have a child with you, or you don’t. If you don’t, then don’t fucking park there. Simple.

There are two types of queue jumpers, and both are detestable scumbags.

The first, are those motorists who deliberately drive down an empty left or right turn only lane, knowing full well they need to be in the adjacent queue (with the decent, considerate drivers), only to cut in at the last possible moment.

The second, are motorway drivers who know they need to change lanes, either because their lane is closing, or because they need to exit the motorway, but they again speed alongside the queue, and cut across at the last second. Their justification, is no doubt that this eases congestion, but I would counter that argument with the following: fuck off.

Suggested response: Don’t let them in, and force them to turn left or right (as their lane dictates), or continue on the motorway – preferably into some form of barricade.

Not forgetting to indicate, because that happens to the best of us every once in a while, but drivers who consciously decide that they are above indicating. These people actually choose to ignore their indicators when turning, changing lanes, or negotiating a roundabout, in an attempt to deceive other motorists and cause an accident. There can be no other explanation for such obnoxious and inconsiderate behaviour, and anyone trying to deliberately cause a crash, should be jailed for attempted murder.

Suggested Response: “I’ll just guess what you’re planning to do, shall I?”

There is absolutely no need to drive so close to the rear of someone’s car that, if they brake suddenly for any reason, you will enter their boot with some velocity. It’s putting your life at risk, but more importantly, they may have shopping in the boot. 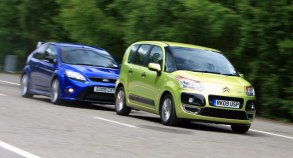 Whilst I don’t condone any of the driving offences in this list, I can at least see why some inconsiderate morons commit them (queue jumping gets you to your destination faster, parking in a disabled space gets you nearer to the shop, etc.), but there is literally no benefit to tailgating someone. If they are anything like me, your actions will only cause them to slow down even more, just to make a point.

Suggested response: “Get any nearer, and I might as well tow you. Back off!”

This makes me so angry, because there is absolutely no excuse for using your mobile phone whilst driving. Not only do a lot of modern cars have the technology for you to make and receive calls, but if your car doesn’t have this facility (mine doesn’t), then it is relatively inexpensive to have one fitted. Don’t buy the same one as me, obviously, as mine is utter shit, but it still just about enables me to make and receive calls, with some (limited) accuracy.

The bottom line is this: if your car does not have the capability to make and receive calls, and you can’t be arsed (or afford) to have a suitable system fitted, then the calls/texts can wait until you stop.

Suggested response: “Get off your fucking phone!”

There you have it – my definitive guide to every arsehole on the road.

Yes, I am well aware that I could have simply condemned all BMW drivers, as they will commit at least six of the ten offences on a daily basis, but then my word count for this week’s entry would have been pitiful.

Until next time, take care of yourselves, and each other.