I don’t always receive feedback for my blog, but in the first year of ‘Sandbach Chatter’ (oh, don’t tell me you’ve forgotten already), it quickly became clear that I should avoid two specific topics, particularly if I wanted to retain – and attract – followers: listing my favourite films or albums, and anything to do with football.

The lists, I understand. Even though I enjoyed writing them, I can see how they became tedious, and it’s safe to say they wouldn’t feature on my ‘best of’ compilation (not that I’m planning one, don’t worry).

In contrast, the general indifference towards any entries about my beloved Stockport County, was harder to accept. This was primarily because it was the enjoyment I got from writing about County for another (football) blog, which got me into this in the first place, and even though I knew it would be hard to maintain interest in a sixth-tier team, many of my initial audience stemmed from those articles.

However, as I amassed new followers (predominantly women), it became clear that I would rapidly lose them again, if I continued to discuss football. This is not because women don’t like football, you understand (bullet firmly dodged), but more that they have very short attention spans (bullet well and truly back on course – calm down ladies, it was a joke).

I soon realised that entries about my boys were considerably more popular, especially the hilarious shit they often come out with (not literally). From this, I have hopefully settled into a style of writing that appeals to people, and whilst I would not want to pigeon-hole myself (it sounds painful), if I was to focus on one particular genre of blogging, it would be parenthood. Well, it’s such a bottomless pit of comedic material, isn’t it?

So, if writing about my sons is generally well-received, yet writing about the other love of my life (County) is not, I am inclined to wonder how an entry combining the two will fare. There’s only one way to find out, I guess… (oh, and before anyone gets on their high horse about me not mentioning my wife as the other ‘love of my life’, not only has she expressly forbid me from ever writing about her, but she knows County was – and still is – my first true love, and she cannot possibly compare).

Now, before those of you who don’t like football lose interest and bugger off, I would like to explain that this entry is more about me sharing my passion for County with my sons, rather than football itself, so you might still enjoy it. Besides, if you stop reading now, how can you be sure I won’t slag you off later?

To provide some background to what follows, I will give those of you who are not familiar with the recent history of Stockport County (which I assume is the vast majority), a brief timeline of the major events leading up to our eldest son, Ollie, being born:

2008 – County win the League Two Play-Off Final at Wembley, in front of more than 35,000 spectators, and are promoted to League One (the third tier of English Football).

2009 – County are placed into administration, following a failure to repay a loan of £300,000 (a sum roughly equivalent to the weekly wages of many Premier League footballers).

2010 – Relegated back to League Two. Takeover by new consortium. Ollie born (all within a couple of months).

In the first season of Ollie’s existence (2010-11), County’s off field problems worsened, and as the campaign drew to a close, it was becoming increasingly apparent that we would be facing another relegation – only this time, from the Football League. Our 106-year stay, in the top four divisions of English football, was about to end.

When it became clear that we would not survive the drop into non-league football, I made the decision to take Ollie to his first ever match before the end of the season. I was desperate for him to be a County fan, like me (it was my main reason for procreating in the first place), and I was adamant that his first visit to Edgeley Park should be a league game. At the time, I had no idea how long it would be before we returned to the league, if ever, and I definitely didn’t anticipate our situation getting even worse.

Ollie was just under three weeks away from his first birthday, when I took him to County’s game against Northampton Town, knowing that anything other than a win would effectively seal our fate (even though it was not mathematically confirmed until the following weekend, when we lost to, of all fucking teams, Crewe).

It was, and still remains, one of the proudest, yet saddest days of my life. Ollie was too young to understand what was happening, and got a bit upset when I overly celebrated a goal, but even though I don’t mind admitting I left Edgeley Park in tears, I had taken my son to see our football team, and I will never forget that.

My only hope, was that he would one day watch County back in the league – assuming he chose to follow the same team as his old man. Oh boy, did he.

Fast forward two years, and County’s fortunes had taken an even greater nosedive, as we suffered yet another relegation, this time to the Conference North.

To put this into perspective for non-football fans (and I include in that category those who support a Premier League side), the Conference North (and South) is where clubs go to die. It is the scrapyard of football, full of teams that, in my ignorance, I had never previously heard of. This is not because they have obscure names, but because they are from places so remote and tiny, only the people who live there have heard of them. I was going to use North Ferriby and Guiseley as examples here, but they’ve since been promoted, and it’s too painful to think we’re now a league lower than what are essentially village pub sides.

As a general rule, if you have to Google the team you have just lost to, to work out where they are in the country (I initially thought Brackley sounded like it was in Yorkshire), it’s time to question your support – but County fans didn’t. We have such a fantastically loyal fan base, that even though some supporters admittedly disappeared (and I’ll be waiting to give them a slap, when they crawl back following our return to the league), we continued to attract crowds well over 2,000, several times what the teams around us were getting.

Hand on heart though, if it hadn’t been for Ollie, and the fact that he was slowly starting to enjoy the football (rather than his half-time hotdog), I can’t promise I wouldn’t have taken a break from County myself.

As it was, by the time we got to our opening fixture of the 2015/16 season, a home match against Boston United, Ollie now wanted his own shirt, beginning an expensive tradition of buying him the kit of his choice each season, with his name and age on the back:

Not only that, but I forked out for season tickets – an expense I was only too happy to incur.

If Ollie’s inaugural visit to Edgeley Park was depressing, then there are no words to describe how I felt after Isaac’s first match – a loss to Telford United, in the Conference North, in temperatures so cold you could have cut glass with my nipples. 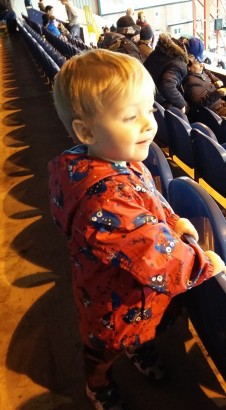 You can tell from the number of empty seats (these photos were taken shortly before kick-off), precisely how keen people were to attend Edgeley Park that day. It was, however, another memorable moment as a father.

I have taken Isaac to a handful of games since, but it was not until last Saturday, against FC United, that he saw his first ever win. Of course, he’s two, so he is still very much in the ‘what food has Daddy brought?’ stage of football spectating (closely followed by the ‘I’ve eaten everything now, so I’m going to run around like an escaped chimp, and kick the shit out of some seats’ stage), but I’m persevering, in the hope that one day he will match Ollie’s enthusiasm.

Having marked the dates I took Ollie and Isaac to their first matches, it seems only right to acknowledge the third occasion in the trilogy – the first game they attended together: Boston United (again) at home, earlier this season.

It’s safe to say that, whilst Ollie is now very well behaved at County, and focusses intently on the match, the combination of both boys together, on my own, was a fucking nightmare. Admittedly, I would apportion blame somewhere in the region of 85:15 in Isaac’s favour, but I was physically and emotionally exhausted by the time we got home. Still, look at their faces: 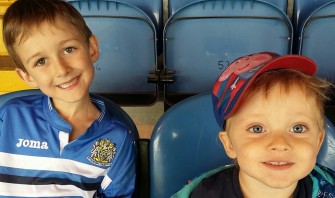 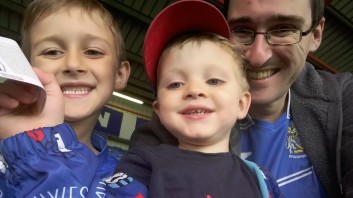 These photographs somehow numb every painful memory, of what was a hellish ninety minutes of frantic parenting.

Last Saturday, as I have already mentioned, I once again braved taking both boys to Edgeley Park, for our ‘derby’ (although it pains me to say it) against FC United.

Although Isaac was once more a handful (read: utter dick), at least he got to see his first win, and enjoyed the very finest in pre-match cuisine: a Gregg’s sausage roll in a bag: 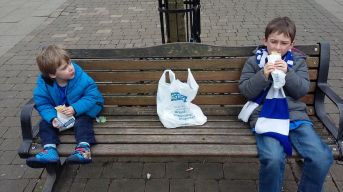 I only hope that, when he reaches Ollie’s age in  a few years, Isaac will have the same love of our team, because Ollie is nothing short of obsessed.

He goes to his weekly football club, proudly wearing his shirt, and, when it’s his turn to be a team captain, he insists on playing as County (against the likes of Unit*d, C*ty and Barcelona, because some kids just don’t know any better).

However, for the finest example of Ollie’s obsession, I shall leave you with the following:

On Wednesday, he went to a half-term sports club, and soon after arrival, the kids were introduced to their guest coach for the day – an Altrincham player. Presumably, the poor lad thought he could hide the fact his team are currently rock-bottom of the Conference North, and wasn’t expecting any fans of that league to be there, so imagine his horror when, not only does Ollie announce to the rest of the group that Altrincham are rubbish, but he then insists on singing a song…

That, right there, is why I had kids.