There wasn’t going to be an entry this week, as I should still be in Newcastle, having travelled up there on Tuesday evening for a three day trial (I’m a Solicitor, remember, so this was a legal trial, and not – as one of my friends believed – the rather unlikely prospect, that I had been invited to train with Newcastle United. Even leaving aside the fact I am nearly 37 – an age where most professional footballers are looking to retire – the far more obvious barrier to me signing for the Magpies, is the fact I am cripplingly shit at football).

Not only had I allowed myself this week off from blogging, I had no intention of regaling you with my ‘toon’ exploits next Friday either. This was partly because the court proceedings are confidential, partly because I (correctly) predicted they would not be entertaining in the slightest (at least, not for the vast majority), but mostly because I had already used the title ‘Blog On The Tyne’ last year.

Anyway, my trial finished early, meaning that I was actually home by Wednesday evening, and since the journey to Newcastle was eventful, I chose to blog this week after all. I’m not too disheartened by the title, either, since not only does it conjure images of lots of baggage – which I had – but this is a bonus week of bloggery for you lucky sods.

Once it became clear, soon after leaving Manchester Piccadilly, that my train journey was likely to be memorable, and since I am now constantly on the look-out for potential blog material, I started to scribble down notes.

What follows, is a TransPennine Express tale of adventure, sex, mystery and intrigue, which nearly ends in murder. 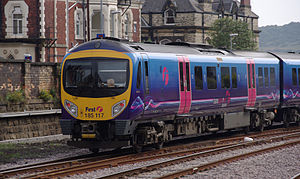 No story should ever begin in Stalybridge. Or end in Stalybridge, for that matter. In fact, let’s just leave it that Stalybridge should not feature in any story, ever. Unless that story happens to be about rampant inbreeding.

I’m travelling from Manchester to Newcastle, for a three-day trial, and have decided to scribble down some notes during my journey, because I have a feeling it’s going to be interesting.

I’ve been working on this particular case for nearly five years, so, even restricting myself to only the most critical documents, I am laden with bags like a fucking Sherpa. 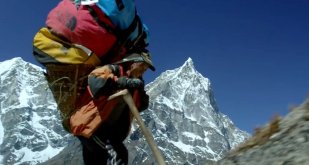 Only a better looking/dressed Sherpa, who doesn’t have a mysterious odour of goat surrounding him (although, I say this with a full cold, and the chap opposite is eyeing me suspiciously, so who knows?)

I have taken my seat on the first of two trains (I have to change at York), and despite annoying most of the carriage, by twatting them around the head with one or more bags as I walked past, I am at least now warmer, and a little less Sherpa-like. The number of bags I have with me is ridiculous. In fact, I’ll try to include a picture, when I type these notes up: 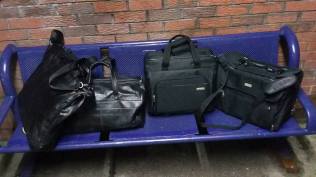 Anyway, I am sat at a table for four, and thankfully no one has reserved the seat next to me, so I have created a wall of luggage, to protect me from any would be assailants (who may wish to seek revenge for the aforementioned head-twatting). In fact, the only other person with a reserved seat at this table, is the chap opposite, who I now realise is not staring at me because he detects the unmistakable scent of goat, but because I have had the audacity to share his table. Get used to it, dickhead, I’m here until York.

Across the aisle, is another table for four (TransPennine Express love a bit of symmetry), with a man on one side, and a young couple on the other. I know they are a young couple, because, so far, they haven’t left each other’s faces. Had they got on at Stalybridge, they may very well have been siblings, but they didn’t.

I also know that the third member of this unfortunate ménage à trois is a man, because, whilst he is hiding his face behind a newspaper (clearly trying to avoid looking at the face suckers opposite), he obviously isn’t as eager to conceal his genitals. I mean, he hasn’t actually flopped it out, but his legs are splayed so far apart, and his trousers are so tight, I swear he’s pointing it at me deliberately.

Jesus, the young couple are still at it. I’m seriously worried for her safety, as it looks like he’s trying to eat her. In fairness, she seems a willing participant, but she is way too good looking for him. She’s not just ‘out of his league’, but ‘four or five divisions above’. Possibly not top flight, but certainly just outside the Championship play-offs, whereas he’s more Evo-Stik First Division North.

This is getting beyond a joke. Even if they only recently got together, that’s no excuse for such a gratuitous public display of affection. I can’t simply look away, either, since I have ‘pubic display of crotch’ on one side, and a man who seriously needs to stop glaring at me on the other. Why isn’t he glaring at the Face-Suckers instead?

I contemplated staring straight down, but then it might look like I’m focussing on my own crotch, and whilst that is always preferable to fixing one’s gaze on another man’s junk (even if he does appear to want me to look at it), it’s still not exactly train etiquette, darling.

Thank God for that. Angry Staring Man has just got off at Leeds. Turns out, I wasn’t just imagining his hatred toward me, as his parting shot was to fart in my face. I hope he trips and breaks his ankle on the platform.

Since he’s gone, I no longer need to worry about him attacking me, and can instead focus on my plan to grab Ugly Male Face-Sucker by the ears, and repeatedly slam his head into the window next to him. It’s bad enough that he clearly wants everyone to see how well he has performed in the girlfriend stakes, but he just took his coat off (in a rare hiatus from gluttony), and he’s wearing a bottle-green turtle neck jumper, tucked into his jeans. He’s a fucking idiot.

Hold that thought. Public Display of Crotch has just lowered his newspaper to sneeze directly at me. He didn’t even try to put his hand up to cover his mouth, and would rather sneeze at a stranger, than risk soiling his reading material. I don’t care that I’ve had a stinking cold for a few days, I now hold him solely responsible for the fact I feel like shit.

Did that announcement just say York? Yes! I’m getting off!

You honestly couldn’t make this shit up.

I got off the train at York, and ran over to make my connection. As I got to the platform, and to Coach D (where I had another seat booked), the Face-Suckers only bloody turned up next to me, and got on the same carriage.

Then, despite it being clear they didn’t have reservations, and had a half empty train to choose from, they walked down the carriage in front of me, stored their bags in the overhead rack, and sat down in my seat.

Admittedly, I could have just chosen another empty seat, but I wanted to be at a table, and this was now a matter of principle, so I politely asked them to move. Amazingly, although Pretty Female Face-Sucker was apologetic, Ugly Male Face-Sucker actually tutted at me, for moving him out of my seat!

They’re now sat across the aisle from me again, and… yes, they’re celebrating with a nice fondle. Well, their mouths have been apart for five minutes while they switched trains, so it’s only right they make up for lost time.

I hate him, and I want him to suffer pain. The conductor (are they still called that?) just walked down and asked to see our tickets. Of course, love’s young dream is a student (just when I didn’t think I could despise him more), but he didn’t have his railcard to hand, and evidently realised it was in the bag above my head – which he had stowed there, shortly before stealing my seat.

Tutting (I am at least comforted by the fact he seems to tut at anyone who interrupts his foreplay), he grabbed at the bag, but only succeeded in dropping it onto the back of my head. In typical British fashion, I naturally pretended this hadn’t happened (even though the people in the next carriage probably heard my skull fracturing), but made a mental note to deliberately drop my Court bag on his head later.

They better get off at Durham.

Although he had all the turtle-neckiness of a Durham University student, it looks as though they are in fact studying at Newcastle instead, which is the next – and final – stop, so I’ll have been stuck with them for the entire journey.

He just mentioned that he’s studying Archaeology. I have nothing against archaeologists per se (apart from this one, obviously), but I should have guessed he’d be studying something like that, in his stupid fucking turtle neck jumper. I bet he’s gone to a fancy-dress party as Indiana Jones at some point.

He’s now decided to get ten minutes of post-coital rest, before we get into Newcastle, and has stretched out, leaning his head on Pretty Female Face-Sucker’s shoulder, and putting his feet up, across the aisle, onto the edge of my seat. I think I’ll cut his feet off first.

Obviously, I’m not writing this last note from the train, as it terminated at Newcastle and I had to get off. A determined blogger I may be, but even I wouldn’t sit on an empty train, scribbling away.

I wanted to add this epilogue, having just got to my room at the Travelodge (no expense spent, but I have to say this particular ‘lodge, is certainly worth every one of it’s two stars), because it’s just dawned on me that Angry Staring Man, from the first train, wasn’t angry with me at all. He was angry at Turtle Neck Face-Sucker, and was trying to communicate this silently to me. He wanted us to unite, in an act of fully-justified extreme violence.

So, Angry Staring Man, if by some miracle you’re reading this, I am sorry for misjudging you. If you ever fancy meeting up, in the Archaeology Department at Newcastle University, I have a spare hammer I can bring along.