It’s that time of year again, when parents around the country will be forced to sit through what feels like several hours of appalling acting and singing, while alternating between their increasingly-numb arse cheeks, on a chair so small and plastic, it might as well have come from a doll’s house: the school nativity. 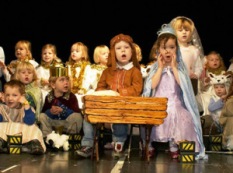 It’s always the same old story – boy meets girl, boy falls in love with girl, girl gets mysteriously pregnant, child turns out to the son of God. How many times have we heard that old chestnut?

But, just imagine if the story was set in modern day Sandbach….

Act I – Mary Gets Knocked Up

Narrator: This is the story of the birth of Jesus. We begin in Sandbach, with a young couple named Mary and Joseph….

Joseph: Look, I know what you said about the whole ‘waiting until we’re married’ thing, but I was thinking tonight we could, you know [whistles].

Mary: No, I want to wait. Besides, I have a headache.

Joseph: Of course you do. Right, I’m off to bed then. I’ve got to be up early to get to that decorating job over in Haslington.

Narrator: Soon after, Mary also retired to bed, but before she could sleep, a figure appeared in her room…

Gabriel: Look, lady, I haven’t got all night. Are you Miss M. Virgin?

Mary: Well, sort of. It’s actually ‘Virgin Mary’ rather than ‘Mary Virgin’. Who are you?

Mary: Keep your voice down, dickhead. That’s my fiancé’s Christmas present and he’s next door. I only ordered it an hour ago!

Gabriel: That’s Amazon Prime for you, sweetheart. Half the time, we’re on our way before you’ve even clicked ‘buy’. Sign here.

Gabriel: Cheers. Have a nice night… Oh, by the way, you’re pregnant.

Mary: I’m fucking not. You calling me fat? Cheeky bastard.

Gabriel: Trust me, you are. Your baby will be the son of God, and the Saviour of Mankind. You must call him Jesus.

Gabriel: Fine, don’t believe me. Good luck explaining that one to your fiancé, ‘Virgin’.

Narrator: And, with that, the Angel vanished, but not before leaving a delivery note which read: “We tried to delivery your parcel BABY today, but you were out A BITCH, so we left it IN YOUR WOMB LMAO”

Act II – The Morning After

Narrator: The next morning, Joseph got up early for his decorating job, to find Mary at the kitchen table, crying into a bowl of Weetos.

Joseph: What’s up with you?

Mary: It’s not what you think.

Mary: No one. There’s been no one. I’ve never even–

Joseph: Like hell you haven’t. Babies don’t just magically appear, do they?

Mary: This one did. I was visited by a delivery driver last night–

Mary: – let me finish. He told me we were going to have a baby, and our baby would be the son of God, and we must call him Jesus.

Joseph: Have you been drinking?

Mary: No, honestly. I haven’t drunk with breakfast in months, you know that. Besides, I can’t drink now, can I?

Joseph: You honestly expect me to believe you’re pregnant, but still a virgin? I know you insist on calling yourself ‘The Virgin Mary’ – which is getting really embarrassing for me by the way – but this is taking the piss.

Narrator: With that, Joseph collected his tools, and stormed out of the door. But that very same evening, Joseph had a dream about Mary being pregnant, and he was told they would have to travel to Bethlehem for the birth.

Joseph: Look, I apologise. I know you’re pregnant with the son of God.

Joseph: I’ve had a dream.

Mary: Easy there, Martin Luther King. What kind of dream?

Joseph: Well, at first it was about your sister, but then it changed and an angel told me you really were pregnant, that we would have to travel to Bethlehem to have the baby, and he really is the son of God.

Mary: What about my sister?

Joseph: Never mind that. What matters is we’re having a baby, and we need to get going if we’re to make it to Bethlehem in time.

Mary: I don’t want to go to Bethlehem. Leighton Hospital is only a few miles away, I’d rather go there. Plus, Bethlehem is a dump.

Joseph: That’s Burslem, love. Bethlehem is a tiny farming village in South Wales (seriously, it is, look it up). It’s a long way away.

Mary: It must be if it’s going to take us nine months to get there. What are we going on, a donkey?

Joseph: Yeah, listen, about that….

Narrator: Once Mary had calmed down, and had finished shouting things like ‘I’m not riding a fucking donkey for nine months while I’m pregnant’, they had a shotgun wedding, then set off in search of Bethlehem. For eight months they travelled, during which time they mostly argued, and only ate in service stations. The journey was arduous, and not helped by some roadworks near Shrewsbury. Eventually, they arrived in Bethlehem, just a few weeks before Mary’s due date.

Mary: Look, I’m knackered, and if you make me play the number-plate game one more time, I’m going to punch you in the throat. Can we please find somewhere to sleep?

Mary: Don’t start. This was your stupid idea in the first place, remember? I’d have preferred a bloody home birth over this. Just be thankful I haven’t yet…

Mary: No, I just wet myself because you’re so funny. Yes, really.

Joseph: Crap. Look, there’s a place up here, I’ll get us a room.

Narrator: So, Joseph and Mary hurried to a nearby Travelodge, and walked into reception.

Joseph: Hi. We don’t have a reservation, but were hoping you might have a room?

Inn Keeper #1: You having a laugh? It’s nearly Christmas, pal, you’ve got no chance. And we don’t allow donkeys in reception.

Inn Keeper #1:   Probably should have planned ahead then, eh? Look, you could maybe try the Holiday Inn down the road, but I doubt they’ll have anything either.

Narrator: Joseph and Mary walked to the Holiday Inn

Joseph: Don’t suppose you have a room spare?

Inn Keeper #2: At Christmas?! No, sorry. You tried the Travelodge?

Inn Keeper #2: Yeah, that’ll be Craig. Sorry mate, your only chance might be the farm around the corner.

Joseph: She’s having a baby.

Joseph: Cheers. It’s not mine though. Well, I guess it is, technically, but we’ve never, y’know…

Inn Keeper #2: Fair play. Not sure I’d have stuck around, if my missus had been cheating.

Narrator: At this point, Mary screamed at Joseph to hurry up, so they dashed (well, Joseph dashed, and Mary waddled like a penguin) to the nearby farm, where Joseph banged on the door.

Joseph: I’m not selling. My wife is about to have our baby any minute, and I was wondering if you had any rooms?

Inn Keeper #3: Look… best I can offer is the barn round back. Stinks of shit, but there’s some hay so you’ll be warm enough.

Joseph: Is it en suite?

Inn Keeper #3: Pat, you heard this? Joker at the front door wants to know if the barn is en suite! No, muppet, it’s not. Take it or leave it.

Joseph: What? No, I’m not having our baby born–

Mary: Do you…. ARRGGGGH…. have something the size of a rugby ball appearing from between your legs?!

Narrator: And lo, it came to pass, that Mary lay among the hay, with one foot on a sheep trough, and the other on a tractor wheel, screaming like a wounded banshee, while the son of God emerged into the world. Pat, the farmer’s wife, brought blankets to keep the baby warm, and found an old Mamas and Papas travel manger in the loft. Soon afterwards, she announced that the child had visitors.

Mary: You’d like that, wouldn’t you? Anyway, I don’t care who it is, I don’t want the first thing they see to be my foof. Cover me up, dickhead.

Wise Man #1: Is this where we may find the son of God?

Wise Man #1: Well, it’s Stuart really, but I am the first of three Wise Men. A few days ago, we saw a bright light in the sky, which we followed all the way to Cardiff Airport. Turned out to be an Easyjet flight. But then someone told us to get to Bethlehem, as the son of God was about to be born, and we should bring him gifts. I have brought gold.

Mary: Nice! Yeah, you can come in. Got anything else in there for me, handsome?

Mary: Sod off. You made me travel hundreds of miles on a donkey, to give birth in a fucking shed, and then you immediately start talking about my sister. Think yourself lucky I’ve not nutted you.

Wise Man #2: On a donkey? Why didn’t you just get the train?

Mary: There was a train?! Nine months on a donkey and there was a TRAIN?!

Joseph: Erm… I was going to mention that.

Mary: Don’t you speak to me. Right, chuckles, you got a gift for the baby ‘n’ all?

Wise Man #2: Indeed, I have. I bring Frankincense.

Mary: What the hell is that?

Wise Man #2: Not sure. Hang on, I’ll Google it…. Ok, it’s an essential oil used in aromatherapy. Might be useful, after what you’ve been through.

Mary: Not gold though, is it?

Wise Man #3: The aromatic resin of a small thorny tree.

Mary: Jesus wept….. Joseph, you still with us? I said ‘Jesus wept’. See what he wants, will you?

Mary: Can’t get the staff. Right, let me get this straight. Brad Pitt over here brings gold, and the best you two idiots can manage, is some oil and part of a tree?

Mary: So you should be.

Mary: Then you should have got three lots of gold. Bloody murf indeed.

Mary: Whatever. It stinks too. What is that?

Joseph: No, I think the smell is Jesus Christ.

Mary: Oh, right. Best get used to that, I guess. Hey, Kevin, ever changed a nappy?

Narrator: Here endeth the story of the baby Jesus. Some other stuff happened after that, but we’ll leave the rest of the story until Easter. Thank you for watching our nativity.