It’s not often that I write something serious.

There are a few reasons for this. Firstly, I’m not very good at being serious, and it’s not a style of writing that I particularly enjoy. I much prefer to find the comedy in a situation, as you may have gathered by now, and – generally speaking – writing about my (often embarrassing) personal experiences, comes more naturally to me. If I didn’t enjoy writing this blog, we wouldn’t be here at entry #93.

Secondly, it’s far easier to appeal to a wider audience, and maintain their attention, if they enjoy what you write about. That’s not to say serious subjects don’t have a place – and longevity – in the world of blogging, of course they do, but I would personally hate to focus on one subject, without any element of humour, and feel like I was getting people down (or bored).

Thirdly, I cannot resist the opportunity for a bit of daftness and double entendre (note to self: ‘Daftness and Double Entendre’ as possible autobiography title). A good knob-gag is like catnip to me, and any attempt to resist grabbing it with both hands would be futile. *sniggers*

Ironically, despite all the above, this ‘serious’ entry will still contain an element of personal embarrassment, not to mention a large number of references to male genitalia.

Let me explain. Just over twelve months ago, I contemplated writing an entry about testicular cancer. As many of you will know, the ‘Movember’ charity has exploded in recent years, with blokes all over the world growing moustaches for the month, to raise awareness of testicular (and prostate) cancer, as well as mental health issues, among men.

I took part in Movember myself three years ago, partly because I wanted to do my bit for a very worthwhile charity, but also because I had never grown a moustache before, and I was curious to see what I would look like. Turns out, I looked like a twat: 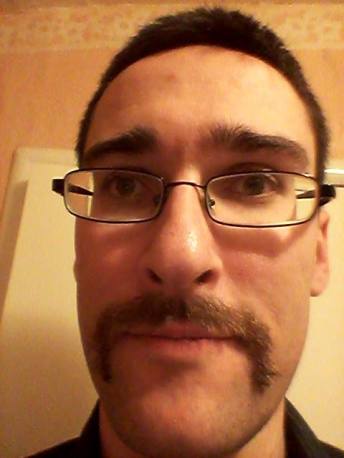 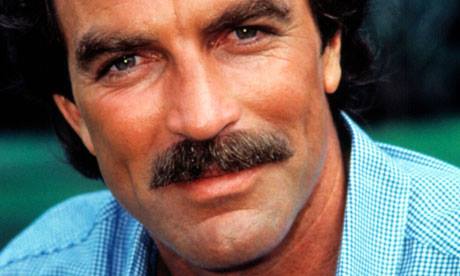 I only went for the handlebar look because I wanted to make a bold statement, and to fully embrace the concept of doing something unusual for charity. Should I ever choose to grow facial hair properly in the future (if, for example, I want my wife to leave me), I will never again opt for this style. In fact, I wouldn’t restrict myself to just a moustache anyway, since – apart from during Movember – all men with moustaches should be approached with extreme caution and suspicion.

Anyway, not only did I find the whole experience very embarrassing (apart from on the rare occasions I encountered a fellow ‘MoBro’), but it was itchy, and my wife did indeed threaten to leave me if I ever grew another. I therefore decided that my own personal participation in Movember would be a one-off, but I still donate to the charity each year.

Then, two years ago (by coincidence, it was November), I had reason to go to the GP myself, with my own testicular-related issue. Since only my wife and doctor were aware of this until now, and I know my family and close friends may react with some concern if made to wait, I’m going to say from the outset that I did not have testicular cancer. In fact, it all turned out to be fine, and everything is fully shipshape down there – with all three of my balls working perfectly.

Essentially, without going into too much detail, I developed a sharp stabbing pain in one of my testicles, which didn’t get any better after a few weeks of hoping it would. Had that pain been in virtually any other part of my body – with the possible exception of my head – I would not have been anywhere near as concerned as I was, but, if I am entirely honest, I was shitting it.

No matter how much I tried to re-assure myself that, despite the pain, there were no lumps or abnormalities down there (to my knowledge), and regardless of how much I read that testicular cancer is rarely, if ever, accompanied by pain anyway, I was still very scared. Maybe I was overreacting, and perhaps my inner hypochondriac took over (I know he’s in there somewhere, the devious little bastard), but I imagine most men, when asked, would admit to worrying about that part of their body the most.

Is it because that’s the one area we’re most protective about? Or perhaps it’s so personal and private to us, we don’t like talking about it, let alone showing it to a stranger (and, I should stress here, I’m talking about a medical professional or partner, not someone on the bus)? Is there a stigma attached to problems in that region, and we feel that our very masculinity is questioned if something isn’t working right?

I’ll wager it’s a combination of all the above, and I am no exception. It took me well over a week to open up to my wife, the woman I share everything with (apart from chocolate Hobnobs), because I was that worried and embarrassed to admit something was wrong. My wife. That’s fucking ridiculous.

Naturally, she insisted I go to the GP, but even then I chose to leave it a week or two to see if the pain would subside. It didn’t, and I eventually – not to mention reluctantly – accepted that I needed to get checked out. I still remember sitting in the GP waiting room, sick with fear, forcing myself to recall everything I had read which had indicated it would all be ok.

Looking back, I was overreacting, and there will be people reading this who have had, or will currently have, far more serious medical issues than mine. But, as I have already explained, it’s an area we men are most frightened about malfunctioning, and that kind of worry can do stupid things to your rationality.

My GP carried out an examination, and reassured me that there was nothing to be too concerned about, but since the pain had persisted for a few weeks, he wanted to refer me for a scan at a nearby hospital.

Any embarrassment I felt during the examination, paled into insignificance when compared to walking around a hospital in an open-backed gown with my arse in the breeze, before enduring an ultrasound with TWO female sonographers. No amount of ‘wow, that’s the biggest one I’ve ever seen’ and ‘your wife is a very lucky lady’, was going to make me feel any better or less uncomfortable (ok, that didn’t happen, but they really should do that more often, like when you used to get a sticker at the dentist for being a big boy). Thankfully, the ordeal was over in a matter of minutes – which is so often the case when I have my genitals out near a woman.

I’m hesitant to admit this, but as I drove back home following the appointment, knowing the results would most likely confirm everything was ok, yet aware I would have to wait another week or so to find out, I cried. I don’t mean sniffled a bit, either. I mean fucking sobbed. I don’t know whether it was fear, relief, or a mixture of the two, but at that point it just got a bit too much for me.

I was stupid. I was stupid for thinking it was something serious, and worrying about it, in the first place, but I was even more stupid for delaying going to the doctors to get checked out. Then, to top it all off, I was supremely stupid for deciding not to write this entry a year ago, through fear of further embarrassment, and what people might think of me, as a result.

The truth is, I’m still a little apprehensive of how this entry will be received, and how readers might react, but that’s the entire fucking point. Why? Why am I, and other men like me, so concerned about sharing our experiences? Thankfully, my issue was minor, and has long since resolved, but there will be men out there – perhaps even reading this – who are in a similar situation, and who also delay getting medical advice. Every day, nervous, embarrassed men, are leaving it too late to get checked out, and that’s when there is a problem.

I’m not going to lie and say the examinations and scans were fun (although, ordinarily, if someone offered me the chance of being locked in a darkened room, while two women applied gel to my nether regions, they wouldn’t even get to finish the sentence before my pants were off), but any issue you have, no matter what it may ultimately turn out to be, is far better dealt with as soon as possible. No amount of hoping it will go away on its own – even if it eventually does – is the sensible approach.

So, to any lads who are reading this, please check yourselves regularly, and, if you do discover anything out of the ordinary, don’t be a dick – get to a doctor.

And, to any women reading this, make sure the man in your life checks himself regularly. Even offer to help, or do it for him, if that’s what it takes. Few men will pass up the opportunity of having their bits fondled, even if there is a (very) serious reason for doing so. Of course, if you’re single, or gay, and the only men in your life are relatives and friends, it’s probably best leaving it for them to check. No one needs that kind of awkwardness around the dinner table at Christmas.

Look, all joking aside, we shouldn’t be so uptight about issues like this (and the same goes for some women, although I suspect they are far better at sharing and resolving personal medical issues than us blokes), and the more we can raise awareness, the more we can catch cancer early, when it is still treatable.

In writing this, I am not looking for attention, recognition, or even sympathy for my own situation – when, in hindsight, I overreacted badly – but the more people share their experiences, no matter how they are then perceived, the less it will become taboo.

I’m going to leave you with the words of a good friend of mine, Matt, who has kindly given me permission to repeat part of his Movember page:

“I had testicular cancer when I was 26. I left it too long to go to the doctors, and had to have radiotherapy as it had started to spread. Thankfully, we got it in time, and I’m here to tell the tale – as well as having two beautiful children.

My aim in doing Movember, is to break down the barriers and stigma that still exist with blokes. My message is simple: check yourself (or get some to do it for you!) once a month, and if you find something, go the doctors. We’re all in this together, so we should talk about it and make it a normal part of conversation.”

Couldn’t have put it better myself. After all, like so much of this blog, it’s just bollocks.

(oh, and yes, that was Tom Selleck earlier).