Come inside, it’s fun inside!

Now, if you have young children, and your television is *blessed* with the Disney channel, that probably made perfect sense. You might even have sung along, whilst twitching uncontrollably.

However, if you don’t have young children, and have never had the *pleasure* of watching ‘The Mickey Mouse Clubhouse’, not only will one of the catchiest theme tunes in cartoon history have passed you by, but you probably thought I had taken leave of my senses, or started drinking heavily whilst blogging.

Fear not, since I lost my senses shortly after Ollie was born, and haven’t – as yet – managed to complete a single blog entry fully sober, so I cannot blame Mickey Mouse and his cartoon pals for my increasingly fragile state of mind.

Perhaps I should explain. Two weeks ago, my wife and I took the boys to Disneyland Paris for half-term, and whilst I hadn’t expected the experience to be stress-free and relaxing, I equally hadn’t expected to return to work more exhausted than when I had skipped out of the office the Friday before.

If you have never been to Disneyland Paris, let me try to describe it. Imagine Alton Towers or Chessington World of Adventures, only twice as expensive, and with the colour contrast turned up full (to the extent you require sunglasses, even in October). Then, throw in some over-sized cartoon characters, a truckload of rude Europeans, and – so that you don’t think I’m being all post-Brexit xenophobic – an even larger number of obnoxious Brits. Finally, cover everything in glitter, and start playing the Frozen soundtrack on repeat, until your ears bleed.

We were there for four days, and if you ever think of going yourself, I would suggest you need at least that long to try and experience everything – the place is fucking huge. Not Ikea huge, but it’s certainly bigger than Luxembourg. Having said that, any more than a week, and you’ll most likely require strong medication and therapy for some time afterwards – not to mention a second mortgage – so four days is about right.

Our flight from Manchester to Paris was early Sunday morning, and within minutes of entering Charles de Gaulle airport, we encountered the very worst of British people abroad. I decided to nip to the toilet while we waited for the suitcases, and forced Ollie to come with me for ‘a little try’, despite his protests that he didn’t need to go.

As we performed our post-urinary ablutions (that’s how posh folk say they’ve washed their hands after taking a piss), a father and son walked in from our flight. I won’t say what part of the UK they were from – ok, it was Newcastle – but they were as rough as a camel’s arse. Soon after, a man walked past us speaking in French (as was his prerogative, being from France) and the son, who was around Ollie’s age, looked at his Dad and innocently asked what the man had said.

Our bags arrived uncharacteristically promptly for most European airports (and I include our own in that sweeping generalisation), but Isaac’s pushchair was unfortunately nowhere to be seen, and once you’ve watched the same abandoned suitcase go past you seven times, you have to accept that no new items are going to appear.

Thankfully, we were not the only family in this situation, and it turned out that no pushchairs had seemingly made it off the plane, so a few of us went in search of someone to ask. I’m not sure how much help I expected to be, with the solitary year of French I studied in 1994 (frankly, unless ordering a baguette, finding a swimming pool, or asking an airport employee their birthday was likely to be of assistance, I was pretty much useless), but fortunately my woeful language skills were not required, as we then happened to stumble across a kind of ‘buggy park’, where everyone’s infant carriers had been mercilessly dumped. If only they’d told us.

We then managed to find our way to the transfer bus, which was relatively easy (it was near a swimming pool), but naturally the pushchair incident meant we missed our intended transfer. Admittedly, the next one was only twenty minutes away, but I am naturally impatient, and was still ranting about the buggy park when the bus arrived. When will airport bosses learn, that parents need their pushchairs before the suitcases (ideally within thirty seconds of disembarkation, to restrain their rampant offspring), and preferably not abandoned on the other side of the fucking terminal?

Fortunately, my temper was eased by our encounter with idiot Brit #2. Having already ticked ‘xenophobe’ off our list, we could now add ‘chronic imbecile’ to the collection. As we took our seats on the bus, a tracksuit family sat behind us, and whilst I won’t say what part of the Country they were from – ok, Birmingham – the mother was clearly not the sharpest. I listened while she asked her son, who was a good few years older than Ollie, whether he could spell ‘Disney’. I won’t judge the poor lad, as there could be any number of reasons why he might struggle with spelling (the main one, I fear, being his lobotomised mother), but he only managed ‘D-I-S-N-Y’.

A fair attempt, but then loudmouth mum congratulated him for being so close, having apparently succeeded in getting ‘four out of five’ correct. The mind boggles.

Thankfully, the transfer to Disneyland was shorter than expected (which was for the best, since if I had heard ‘Brummy Mummy’ mention how Disneyland Paris was smaller than the ‘real’ one in America one more time, I may very well have forced my fist down her throat), and despite arriving a couple of hours before check-in, our room was ready. We were therefore able to drop our belongings, and head straight back out of the hotel towards the Disneyland Park.

At this point, I could describe our holiday in detail, but fear you would find that rather boring, so I will sum up our experience with brevity: we spent three days queuing – to meet characters, go on rides, or eat. Well, I say ‘queuing’, but the French have no concept of the phrase. They do have a word for queue (in typical Gallic apathy, it’s queue, but you have to pronounce it with contempt, in the same way you might say ‘skidmark’, ‘moist’ or ‘Burnley’), but if you try to explain the British tradition of standing in a line and awaiting your turn, they look at you blankly.

They are also incapable of apologising. I lost count of the number of times someone walked into me, and in true British fashion I instinctively apologised (even though it was clearly not my fault). Each time, I got nothing in return other than a scowl, which suggested it was indeed my fault for being in their direct path, while they weren’t looking where they were going.

Soon after entering the park, we encountered our first taste of queuing, as we stood for nearly an hour and a half to meet this cat: 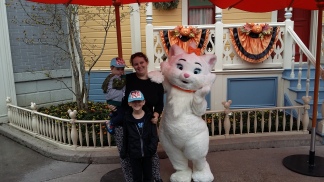 Apparently, this is ‘Marie’ from The Aristocats, who we had no real desire to meet, but we just saw a line and joined it – because it seemed like the right (British) thing to do.

After an hour and a half, I did start to panic about what the lines would be like for characters we had actually fucking heard of, but it later transpired that most photo opportunities are kept quite brief. Not Marie though. She insisted on trying to be *cute* with every child she encountered, but the charm of watching her lick her paws – and then each child – wore off remarkably quickly. By the time it was finally our turn, I glared with my very best ‘lick me, and I promise I will hurt you’ look (which, amazingly, is not a look I have ever required before).

In contrast, the queues for meeting Mickey, Minnie, Goofy and Donald (you know, the proper characters) were far quicker. Ollie also got over his initial shyness, which was thankfully used up on the rather pointless Marie, and all of our subsequent photographs were far less painful. 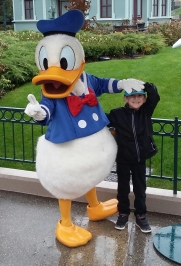 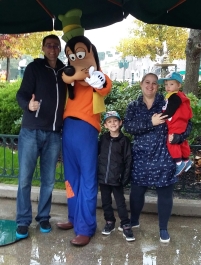 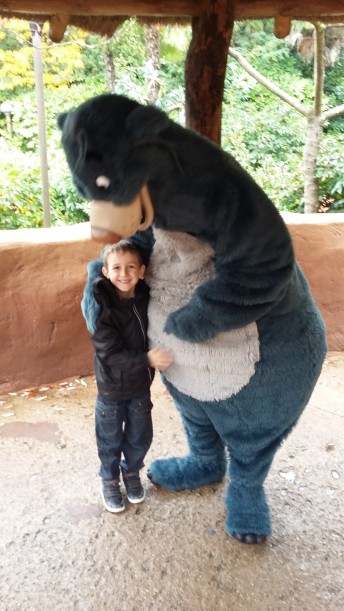 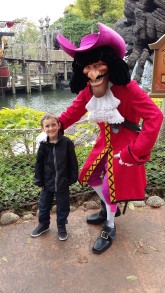 Isaac was terrified of everyone, obviously, but in fairness I can understand why a giant over-sized cartoon stranger might be intimidating to a two-year-old.

On the Monday, we watched the evening parade, which was relatively entertaining – in an overly camp and brightly-coloured way – with the highlight being ‘Belle’ from Beauty and the Beast (who was gorgeous). The red-haired sister from Frozen was easy on the eye too – although I should stress at this point, both characters were played by adult women.

On Tuesday, we let the boys stay up late for ‘Dreams’ – which is essentially a series of cartoon projections onto the Disneyland castle, followed by fireworks, and while we waited for this to start, Ollie and I encountered our third example of ‘detestable Brits abroad’.

As we queued (again) for a meagre box of popcorn – which, incidentally, cost the same as a small family car – a man and child walked behind us, and I caught the following snippet of conversation:

“Stop calling me ‘Dad’, will you? How many times do I have to tell you, I’m not your real Dad?”

Suddenly, ‘Toilet Geordie’ from the airport seemed like Dad of the Year.

We had one mission for our final day, and that was for Ollie to take part in the Star Wars ‘Jedi Academy’, which he had initially decided he was too scared to do, but had slowly plucked up the courage. I can’t blame him, as he had to show off his Jedi moves – and then battle Darth Vader – in front of an audience of about two-hundred people, which I would have been terrified of at his age, but – as is so often the case with Ollie – he made us proud. I only wish the age limit hadn’t been twelve, as I quite fancied taking part myself. 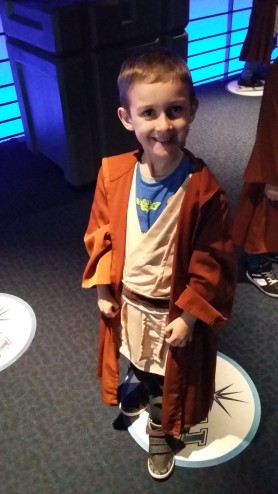 Sadly, the queuing system for the Jedi Academy was a farce, with the result my wife had to stay with Ollie (for over an hour), while I tried to entertain Isaac. This was not helped by the fact I had been suffering with a stomach bug, and required regular visits to the toilet – one of which struck me at this precise moment.

As I dashed to the nearest toilet, I suddenly realised that they were playing Disney songs through the speakers, and I had to suffer an attack of the ‘back-door quick-step’, to the already-nauseating Frozen soundtrack. Thankfully, even in my weakened state, I could appreciate the humour of enduring an explosive bowel movement to ‘Let it Go’. I couldn’t fucking keep it in if I wanted to, love.

Thankfully, despite my stomach upset, the astronomical price of everything, the rain, and the French, our holiday was a success. It wasn’t a relaxing break by any stretch, but it was always going to be about the boys, and they haven’t stopped talking about it ever since.

Even the truly-ludicrous ‘self-service’ procedures at Charles de Gaulle airport didn’t spoil our trip. I understand the appeal of checking-in online beforehand, and welcome it as one less hindrance, but they now require you to also print out your own luggage tags, and scan your own boarding pass at a turnstile, before getting onto the plane. I suppose next on the agenda, is for all the passengers to get together and nominate someone as the co-pilot, to make further savings.

I am all for tolerance of our quirky European neighbours (and, indeed, those around the world – America, I’m looking at you), but the French are really starting to stretch my patience now.