On Sunday, I took the boys to ‘Good Time Charlies’.

Now, I anticipate that you will have reacted to that opening line in one of three ways:

It is by no means the greatest soft play centre ever designed, but when you consider that it is located in Crewe, a place so desolate that even the Halfords on Grand Junction Retail Park is rated as the second-best tourist-attraction on Trip Advisor (after the train station), it is – particularly for unimaginative parents like myself – the default means of tiring your kids out on a Sunday.

Like most soft play centres, Good Time Charlies has a huge maze of cushioned obstacles and slides for kids to throw themselves over and bounce off, and this particular one is designed to look like a castle:

It’s like a medieval Fun House, only without the go-karts and those hot twins.

Adjacent to the main ‘castle’, there is also a smaller area for babies and toddlers to play in; a sensory room; a ‘party room’ (again, not a strip club, remember); an indoor football pitch and, rather bizarrely, a hairdressers (although I have never seen this open, but that might be because I always tend to take the boys on a Sunday).

Once I had signed us in and paid, we all took our shoes off (this is compulsory for going on the equipment, we weren’t just being overly polite), and I immediately noticed my first mistake – I was wearing the worst pair of socks ever. I mean, they weren’t distasteful or inappropriate (I got rid of that pair ages ago), but they were old, grey, bobbled and, as I discovered to my horror when I took my shoes off, holier than the Pope himself.

Bizarrely, I had been putting off wearing these socks all week (I actually intended to throw them out, but felt like I should get just one more wear out of them, for old time’s sake), in case anyone at work saw the state of them – irrational, really, bearing in mind no one at work was ever likely to see my socks. Instead, I chose to wear them on the very day I would be taking my shoes off (and crawling around) in public. I astound even myself sometimes.

Still, in hindsight, I only wish that my socks had been the most embarrassing thing about me that day.

Ollie is currently mad about football. It’s the only thing he plays during break times at school, and virtually all he talks about at home. Normally, as a result, he would head straight for the indoor football pitch as soon as his shoes were off (often while they are still in mid-air), but he could tell Isaac wanted to go in the ‘big castle’, so he agreed we should go there first.

The problem with the castle, is that it is the main attraction, and is generally aimed at kids around Ollie’s age, so when Isaac goes running off into the depths of colourfully padded apparatus, I have no choice other than to follow. Many parents don’t, and will allow their toddlers to venture off alone, but I have this horrible affliction where I actually care about my children, and I would rather avoid a trip to Leighton A&E if possible.

Unlike Ollie, who was an intolerable wimp until around a year ago (and still is, on occasion), Isaac is utterly fearless, and was straight up one of the ramps to the middle level of the castle, before I could get anywhere near him. He did, however, pause momentarily for a hurriedly taken – and consequently rather blurry – photo: 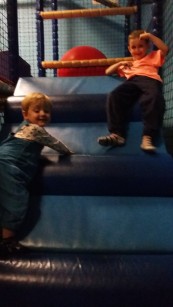 By the time my ageing and decrepit legs hauled me up there, he was already around the corner, across some kind of bridge and walkway, and while he again paused with Ollie for a ‘thumbs up’ photo (a stalling tactic for me to try and catch my breath), he was then off again up another ramp to the top level: 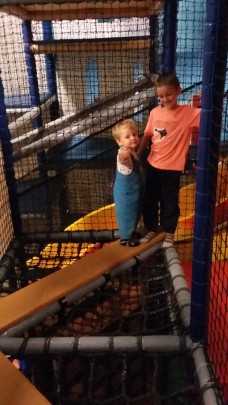 He was like an adorable little monkey…. if monkeys wore dungarees.

Once he reached the top level, he fortunately headed for the shorter of two slides (the main one goes from the very top of the castle to the very bottom, and I would never have got to him in time), and since the end of the slide was near to me, I crouched down (collapsed) to await his arrival.

What I didn’t know, was that a much older kid (I later heard the ‘mother’ shout at him, and he had one of ‘those’ names, where you immediately know he’ll end up in prison one day) had pushed in, and when he arrived at the bottom of the slide rather than Isaac, he thought it would be funny to run up and scream in my face.

In hindsight, it probably wasn’t appropriate to tell a child to go fuck himself, but he really made me jump, and I had reacted before I knew what I was saying. In my defence, my heart rate was already high from running around after the boys, and this little shit damn-near finished me off. I’m not proud of myself, but he certainly didn’t do it again.

He was, however, just a child (albeit one that shared many similarities with a rabid howler monkey), and I guess his behaviour could have been due to a mixture of adrenaline and the excitement of being allowed out of his cage, but that doesn’t excuse the two grown men, who then commando-rolled past me a minute later. I’m not even sure they had brought any kids with them, and they were treating the place like their personal Krypton Factor assault course.

Their behaviour – particularly around young children – was appalling, and liable to cause an injury, so I stood and turned to face them, pushed my sleeves up (which was entirely unnecessary, as I was wearing a t-shirt), and then tutted very loudly, while making a mental reminder to write a strongly worded e-mail to the owners when I got home. That’d show ’em. Ruffians.

Once the boys had finally grown bored of the slide (what felt like three to four hours later), Ollie decided he wanted to go and practice taking penalties on the football pitch, so we began navigating our way out of the castle.

We ended up taking a different route down and, in my haste to keep up with the boys, I didn’t spot a particularly low beam, and managed to crack my head on it. Ok, it was well padded – as you would expect in such an environment – but I hit it at such speed that it really bloody hurt.

Once I had located the boys, with my head and pride still equally smarting, I steered them towards the indoor football pitch, making sure Isaac was near me, as I didn’t want him getting knocked over or hit by a ball. I know, from experience, that there is always one father who considers himself something of a semi-pro footballer, which invariably ends with a child getting hurt by an over-zealously struck ball, but I honestly didn’t expect that father to be me. I thought I was better than that (if we ignore the earlier swearing).

Fortunately, it was someone else’s child who took the full brunt of my twenty-yard free kick towards Ollie in goal, so at least I didn’t have to put up with the tears afterwards. Frankly, it serves them right for wandering across the pitch. I decided to leave Ollie to play with some other boys, and Isaac and I left for a bit of ‘quiet time’.

In the toddler section, there are lots of building blocks, and like most children Isaac enjoys nothing more than watching Daddy lovingly build a tower, for him to immediately kick the crap out of. This time, however, he started to build his own tower, followed by a castle and various other masterpieces. Here are a few of his finest works: 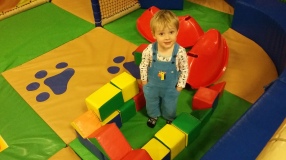 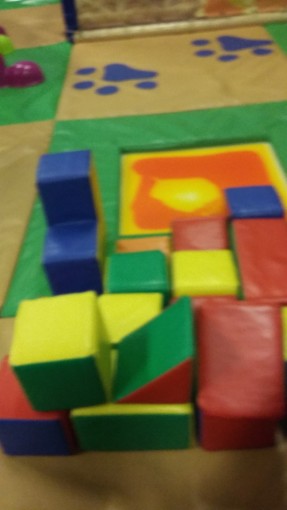 As I sat there, watching Isaac create obscure works of art, I suddenly sensed another child behind me. I apprehensively turned around, and came face-to-face with a snotty little monster, who sniffled “Here” and handed me a particularly gloopy tissue. I was so taken by surprise, I actually put my hand out for it, before immediately dropping it in disgust, and looking around to see if anyone was going to claim responsibility for him.

If his parents were nearby, they certainly didn’t want to admit he was theirs, and things then got even more uncomfortable when he asked where the toilet was. I pointed him in the right direction, but he just looked at me blankly and held his hand out.

Now, if there’s one thing you want to avoid in a children’s soft-play centre, it’s taking someone else’s kid by the hand and leading them to the toilet. Parents – and, indeed, society in general – tend to frown on that kind of thing.

So, I did what any rational person would do in that situation – I turned around and pretended he wasn’t there. Look, I’m fully aware he may have pissed himself (or worse), but it wasn’t my problem. Besides, Isaac has had some kind of stomach bug since the middle of the week, and I’ll wager it was this little grubby little twat which gave it to him. I hope the parents also got it, and have spent every waking moment crouched over the toilet ever since.

I decided it was time for lunch, so once the boys had chosen their meals, we sat down and waited for them to arrive. I sent Ollie to get some cutlery, at which point Isaac started loudly shouting what sounded like “Nice! Fuck! Nice! Fuck!”

I knew he meant ‘Knife’ and ‘Fork’, but apparently the parents around us weren’t as fluent in his particular brand of toddler-speak, and gave me some very disapproving looks.

All apart from one pretty lady, who was looking at us and smiling. My immediate reaction was that she was attracted to me, and I started to smile back with my very best ‘Mummy left us for the window-cleaner’ puppy eyes, but I quickly realised that – even in Crewe – it was highly unlikely that she wanted me.

My next thought, was that she did understand Isaac, and had found the awkward humour in the situation, so she was smiling in a mixture of amusement and sympathy. Yes, that must be it, surely.

It was only then that I noticed my crotch was feeling wet, and I glanced down to see Isaac pouring his blackcurrant juice over the front of my trousers.  To make matters worse, the snotty little shit who had needed the toilet, was watching from the other side of the room and grinning.