I’m trying to teach Ollie to swim, and it’s proving harder than I first imagined.

Initially, we signed him up for ‘proper’ swimming lessons with a qualified instructor, but to say they didn’t go well would be an understatement. In the ten weeks of lessons we dragged him to, before finally admitting defeat, I would estimate that he spent a grand total of about 14 minutes actually in the pool, and during that time he achieved nothing more than screaming to get out again. The lessons were, in short, a disaster.

So, in a moment of desperation, we made him a deal – he would instead be taught by me, once a week at the local leisure centre, but if I felt he wasn’t making any progress, or if he mucked about rather than tried to learn, he would be straight back to the instructor.

He gladly agreed to this, and at first the lessons went quite well. Ok, anything is an improvement on thrashing and screaming, but he genuinely seemed to want to try. I suspect that was more to do with the fear of going back to the instructor, rather than any desire to learn or make me proud, but I didn’t care – he was finally making some progress.

Unfortunately, after a promising start – in which I built up his confidence in the pool – when it came to actually teaching him to swim, we hit some issues.

Firstly, there is one fundamental problem with me being his teacher – I’m not a very good swimmer myself. I mean, I can swim, I’m just not very good at it, so our lessons have been more or less geared towards getting him from one side of the pool to the other, via any means possible (well, apart from floats, rope bridges and small boats).

I decided early on that I wouldn’t be teaching him different strokes and technique, as this can come later (hopefully via lessons at school), and if I can just get him to complete a width or two without drowning, I will consider this a resounding victory.

The thing is, I can fully relate to his fear of swimming, because I was exactly the same at his age. I hated my weekly lessons with a passion, and used to feel physically sick before leaving the house (I still can’t watch Garfield, without being suddenly crippled by ‘swimming lesson belly’).

In fact, the only time I ever came even remotely close to enjoying swimming lessons, was in Year 9 when they became mixed. This was primarily down to one of the girls in our class being an ‘early developer’, which suddenly made swimming (and also our fortnightly trampolining lesson) infinitely more appealing.

Of course, 1990s swimming trunks didn’t leave a lot of room for appreciating the female form, so I was usually one of the first in the pool to hide any potential embarrassment. I won’t mention the girl’s name, but she did more for my swimming capabilities than any instructor. This was also around the time Baywatch was popular (for very similar reasons). 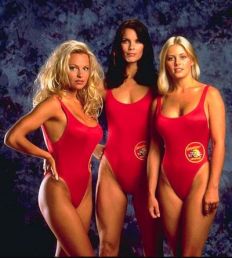 Anyway, because I never really enjoyed swimming as a child, and because I had no intention of swimming for pleasure once I had achieved the bare minimum required by the school, I’m not particularly good at it. As a result, I’m a little unsure how best to teach Ollie. It’d be a bit like Ann Widdecombe teaching people to dance. 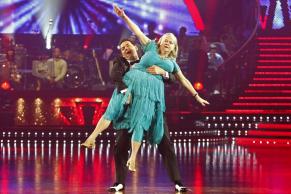 However, if Ollie feels more comfortable with me as his instructor (and, despite the steep prices at our local leisure centre, it’s still cheaper than lessons), then I am happy to persevere.

The next problem, then, is the swimming baths themselves. Sandbach leisure centre doesn’t really offer any suitable evening sessions, where parents can take their children to swim after school – although Ollie would be too tired anyway – and Saturdays are often taken up by going to County, so our only possible swimming day is Sunday.

Unfortunately, the leisure centre only  offers two times on a Sunday – there’s an ‘Aquatots’ session from 10am until 11am (which is for children up to and including the age of six, so Ollie qualifies until next May), and then a more general ‘family swim’, from 11am until noon.

Because we started our lessons when Ollie was four, I initially decided to take him to the earlier ‘Aquatots’ session, imagining that he might feel more comfortable – and less distracted – around younger children. This turned out to be the case, but what I hadn’t anticipated was the pool being split in half, and any children who could not swim confidently on their own, were made to stay in the shallow end.

Bearing in mind the session is for children up to the age of six, it goes without saying that the vast majority cannot swim, so everyone is crammed into one half of the pool, making it very overcrowded indeed. And, whilst this might not present a problem to mums and dads who only wish to bob around with their babies, it’s not ideal for an uncoordinated six-year-old, who is trying to complete a width of the pool without any collisions.

Then, last year, this overcrowding led to a rather embarrassing incident.

There I was, happily guiding Ollie through the water, when one of the lifeguards came over and beckoned me to the side of the pool. My first thought was ‘how the hell do they know I’ve just taken a piss?’ (joke, I’d done it ages before that – the trick is to let a little bit out first, just to make sure the water doesn’t turn purple), but then the young girl crouched down and whispered ‘Meg says she’s getting out now, and will be in the changing rooms.’

Puzzled, I asked her to repeat the message, which she did, and I glanced over to see a particularly attractive ‘yummy mummy’ making her way towards the changing area. Slightly surprised that one of my fellow swimmers had not only found me handsome in my gaudy swim-shorts, but sufficiently attractive to proposition me – via a lifeguard – in this manner, I practiced my very best ‘gee, I’m flattered, but I’m actually married’ expression, before realising what had happened.

‘Meg’ then turned around, spotted us looking at her, and suddenly went bright red in the face, before quickly mouthing ‘no, not him… him’, whilst pointing to another dark-haired chap in the same part of the pool as me – evidently her husband or boyfriend. Shame.

I’m not sure whether it was the fear of seeing Meg again – and the mutual embarrassment we would both feel – or the fact that it really isn’t appropriate to have an erection in a pool full of children, but it was around this time I suggested to Ollie we might be best trying the later session.

So, the following week, we arrived an hour later for the general ‘family swim’, and whilst it was certainly less crowded than before (on account of the whole pool being open to everyone), the yummy mummies had been replaced by obnoxious teenagers, who were seemingly determined to use all the toys, balls and floats in the pool, for the sole purpose of beating the living shit out of each other.

Within our first ten minutes, I had taken a football directly in the face, and when the offending little fuckwit didn’t say sorry, I tutted so loudly that I was certain he had got the message. Yet, barely five minutes later, I realised that he could not possibly have been British (as all British people are terrified of tutting), because another stray ball hit me – this time on the back of the head.

Noticing that the lifeguard – who must have seen it happen – was going to do nothing about it (I was hoping that he might dive in and hold the offender under the water for a few minutes, or at least until the bubbles stopped surfacing), I chose to take matters into my own hands. Telling Ollie to stay where he was, I returned the ball to said reprobate, and positioned myself a few inches from his face.

“If one of those balls lands near me or my son again, I swear to God I will come over and remove yours. I will fuck you up, do you understand me?”

I then spotted his orca of a father, glaring at me from a few feet away, and decided to make a hasty retreat (well, as hastily as you can, whilst up to your nipples in water). I swear it was the father who threw the next ball.

So, now we’re back to the Aquatots session again, and whilst I’m pleased to confirm there is no sign of Meg, we are again faced with the problem of overcrowding, and the fact that Ollie’s progress has been stalled as a result.

The other issue with the earlier session, is that it immediately follows a ‘general’ swim, and, as you might imagine, the only people who are keen to go swimming that early on a Sunday morning, are the wrinkly brigade. And, if there is one thing we know about pensioners, it’s that they don’t give a shit what people think of them.

So, as we arrive in the changing rooms shortly before 10am, the retired men of Sandbach are just leaving the pool, and they all seem weirdly determined to get naked as soon as they are out of sight of the water.

It’s really difficult to get changed for swimming, when you are acutely aware that there is an old man’s junk in your peripheral vision. Obviously I don’t look, but it’s like those horror films, where you glimpse something scary to one side of the screen. Only, instead of a ghost, serial killer or zombie, it’s a shrivelled penis.

My discomfort at being surrounded by so many aging willies, coupled with Ollie’s unashamed curiosity (“Daddy, I can see his winky!”), means we now have to cram ourselves into one of the ludicrously small cubicles instead, which I would struggle to change in by myself, let alone with Ollie as well. This has resulted in my boxers and socks landing on the wet floor more times than I care to mention, as well as the only permanent injury I have ever suffered (which, as I have explained before, is quite an achievement for a man who averages three to four accidents a day).

If you read last week’s blog, you will know that I am not a co-ordinated man, and my limbs have a habit of doing their own thing, so it will come as no surprise to learn that undressing and drying myself in such a confined space, has led to many injuries, and on one occasion I gashed my knee on the door lock so badly, I have been left with a permanent scar.

It wasn’t a huge cut, but it really hurt, and there was a disproportionate amount of blood. There is nothing more traumatising, than being stuck in a changing cubicle, surrounded by a gang of naked pensioners, bleeding and sobbing, while your oblivious son demands a fucking KitKat from the vending machine.

Plus, if I do ever wear shorts now, and someone enquiries about the scar on my knee, I don’t have an impressive fight/power tool/shark-attack story to explain it.

“That? Oh, I did that in a changing room whilst trying to escape lots of naked elderly men.”

Swimming is not for me. 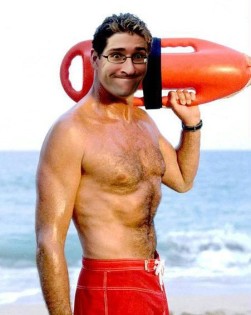