I do not consider myself to be a huge fan of Genesis (the band, rather than the opening book of the Old Testament – although I am not too keen on that either, as I find it somewhat slow and uneventful, you know, apart from the whole ‘creation of the world’ stuff), but I do own a couple of their albums.

And, whilst there aren’t many of Phil Collins’ lyrics that really speak to me (with the obvious exception of ‘Su-Su-Sussudio’ – which I think we can all relate to), he really nailed two of my biggest failings with the line ‘I can’t dance, I can’t sing’.

I have always found this line to be rather odd, bearing in mind he sings it relatively competently, so even if he is indeed a terrible dancer (which I can well imagine he is, just by looking at him), the lyrics are only 50% accurate.  He’d have been far better off writing a song called ‘I can’t dance, and I’m a mediocre drummer’, but I guess that wouldn’t have been as punchy. Shame, because he could have done a duet with Ringo Starr.

Anyway, unlike Phil Collins, I am sadly dreadful at both singing and dancing. Not only have I been lumbered with the kind of singing voice usually reserved for the toothless misfits on X-Factor (you know, the ones who claim to be 35 with seven grandchildren), but I would imagine the only person worse at dancing than I am, is, well, Phil Collins probably.

For starters, I have not been blessed with the sort of body much suited to throwing some shapes around a dance floor. In fact, my lanky physique is only really useful in two situations: finding someone in a crowd (or them finding me), and reaching the top shelves in shops – usually to help a little old lady.

It’s not that I necessarily mind helping little old ladies in shops, but it infuriates me that they never request my assistance directly, and will always instead ask my wife if they can ‘borrow’ me for a minute, like I’m a piece of equipment. It’s degrading, and I’m sure half the time they only ask for help so that they can stare at my perfectly-formed arse as I stretch up. Well, enough is enough, and from now on they can reach for their dirty magazines themselves.

Aside from my physique, I also have a complete lack of co-ordination. On an average day, I will injure myself perhaps three or four times just by existing, so I decided many years ago that it would be best for everyone if I avoided dancing, as it only places myself and those around me in mortal danger. For much the same reason, I have also banned myself from yoga, martial arts, and rhythmic gymnastics.

And, whilst I consider my taste in music to be quite varied, none of the artists or bands I like tend to be very good to dance to, so there aren’t many songs which would entice me onto a dance floor anyway.

For example, I detest all dance music (and its many variants) with a passion, and the sort of cheesy pop generally reserved for weddings and Christmas parties – when the requirement to dance is at its most demanding – makes me want to rip my own ears off. If there is indeed a Hell, I suspect the soundtrack will feature Candi Staton, Dexys Midnight Runners and ABBA on an eternal loop. 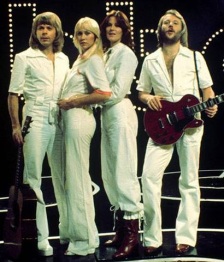 Don’t get me wrong, I can see the appeal of dancing, but what I don’t understand is why women, in particular, find it so important in a potential mate (‘Oh, I know he has a criminal record and no job, but just look at him move. I can change him, Sandra, I know I can’). We are not, after all, peacocks, and I would have thought it sensible to consider a whole host of other qualities in a potential partner, before getting anywhere near ‘does he enjoy the Grease Megamix at a wedding?’

If I were a woman (and I thank the Lord I’m not, as I wouldn’t get anything done if I had boobs to distract me all day), I would consider personality, looks, sense of humour and mental stability as key factors when choosing a partner, not ‘performance on a dance floor’. Yet, there are women out there who will be put off approaching a man in a club – regardless of how ‘right’ he may ultimately turn out to be – purely because he dances like he has a scorpion gradually working its way up the inside of his trousers.

This is not intended to be a sweeping generalisation, as I appreciate there are women out there who can look past a man’s horrendous dance floor routine (otherwise I wouldn’t be married with children) but these shallow females do exist, I promise you. I once knew a girl who dismissed a potential boyfriend, purely because of the shoes he was wearing. I shit you not.

We men are far easier to please when it comes to the mating process, and the ability to dance rarely features in our selection criteria. For example, mine (and I suspect I speak for many men here), goes a little something like this:

Do I find her attractive (e.g. does she appear to have a pulse)?

Has she run away from me screaming?

Does she support either Manchester team?

Buy a ring quick, you found one!

Simplistic, maybe, but its worked for me so far.

As you might imagine, I try to avoid dancing at all costs, but from time to time situations arise where I know I am going to be forced to dance, and when that happens I need to prepare myself – both mentally and physically – by getting drunk. This, in itself, presents further problems, as there is often a very fine line between ‘drunk enough to dance’ and ‘so drunk, he actually thinks he can dance’.

As a general rule of thumb, if you ever see me on a dance floor, and I seem to be enjoying myself (rather than appearing to be there under extreme duress), I have gone way past my self-imposed alcohol limit, and I’m going to feel dreadful the next day. I would urge you to approach me – carefully, I’m dancing remember – and have a quiet word. Something along the lines of ‘you’ve had far too much to drink, and you need to go home, now‘.

Don’t listen to my protests either, as I will thank you for your kindness in the long run, even if I’m telling you to leave me the fuck alone at the time. Persevere, and don’t take no for an answer. If all else fails, coax me away from the dance floor with a Jagerbomb (just don’t let me drink it).

By the same token, if I look miserable on a dance floor, and my movements are restricted to slight steps either way (with minimal arm gestures), then I am not anywhere near intoxicated enough to be up there, I am having a horrible time, and I desperately need a rescue. You must still approach me, but with an excuse to get me off the dance floor – and to the bar – pronto.

As a handy guide: 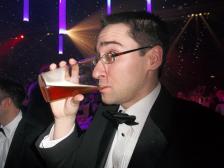 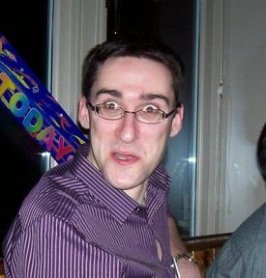 I need to be drunk to dance, because it helps to reduce my fears and inhibitions, and I become less aware of my overly-critical inner-monologue (which judges my every move on a dance floor). For me, dancing is like going to the dentist to have major work done – the more I am anaesthetised and numb, the easier and less painful I find the whole experience.

For example, consider the scenario where I am relatively sober, and therefore extremely concerned that everyone on the dance floor is watching me and cringing/laughing. Inside my head, the narrative goes a little like this:

Right. In a minute, we’re going to mix-up the leg movements a bit, ok? You’ve been doing that ridiculous side-step thing for two and a half songs now, and everyone thinks you might be stuck, or having some kind of breakdown. You’ve got to try something different.

What the FUCK was that? What did you do that for? Jesus wept, they’re really looking at you now. Ok, damage limitation. Get to the end of the song, then tell everyone you don’t like the next one, and suggest going for a sit down and a drink. You’re a disgrace to mankind, you really are. Get pissed, quickly, for both our sakes.

So I do. I know I shouldn’t, especially as my ability to deal with hangovers is rapidly diminishing as I get older, but it’s the only way I’ll get back up there once things have gone south.

However, if I then drink ever-so-slightly too much, I run the risk of getting overly confident (as well as emotional and ‘handsy’). If the messages from my brain to the rest of my body were confused when I was sober, imagine what it’s like when I’m pissed:

You’re awesome! See her over there? She wants you. And her friend. They’ve been watching you for a while, and they think you’re a dancing God. Bet one of them comes over in a minute and offers to buy you a drink. Let’s step it up a notch.

Steady now. Remember to keep the arms below shoulder height, this isn’t ‘Flashdance’. That’s it. Ooh, nice leg move. That’s new. Where did you learn that? It looked like you had a scorpion going up your trouser leg! Neat. You’re really getting into the groove now my friend.

She’s coming over! Told you she would.

What was that she said? She thinks you should go home? Tell her not yet, you’re the king of the dance floor!

Ooh, Jagerbomb. Go on then.

Welcome to my brain, folks. It’s a terrifying place.