The more observant among you, will have noticed that there was no entry last week (at least, I hope you did) and this was because we were on holiday – firstly in Norwich visiting my in-laws, and then, last weekend, we went to Peppa Pig World near Southampton. A place of strange people, weird smells and unusual noises… and then we went to Peppa Pig World (joke – I happen to like Norwich very much).

You might think, bearing in mind my newly discovered fondness for Peppa Pig (the show, rather than the irritating little pork-scratching herself), this entry would be about our experiences last weekend. For example, I could write about how I became a bit star-struck when I met my hero, Daddy Pig:

Or I could explain about Isaac (whose tiny little mind was well and truly blown when we arrived), and the fact that he was too shy to go near any of his idols, except for Zoe Zebra (who he cautiously high-fived, and then spent the rest of the day grinning and staring at his hand, as if he would never wash it again): 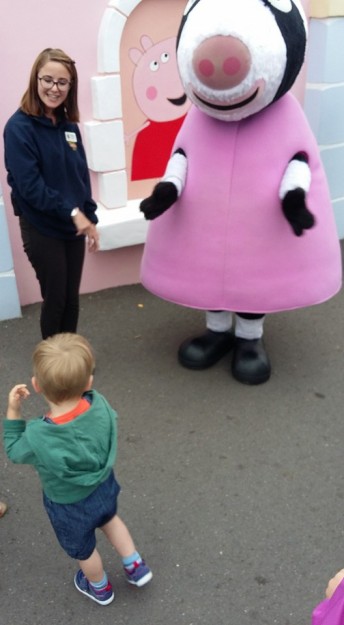 Honestly, he hasn’t stopped talking about her since, and I suspect this is his first crush. I haven’t the heart to tell him ‘Zoe’ was probably a desperate-for-work student, who cries themselves to sleep every night at the thought of going back to work the next day (I am certain I heard Suzy Sheep mutter ‘fuck my life’ at one point under her oversized costume, but in fairness that’s just typical of Suzy – so maybe it was part of the character).

Anyway, rather than write about Peppa Pig again (a subject which has been done to death on the parenting blogs of late), I wanted to tell you about another of my pet hates.

You see, while we were in Norwich, we spent a gloriously sunny day at my in-law’s beach house in Bacton (a coastal village about an hour North-East of Norwich). The beach house is lovely, but – for me at least – it has one fundamental feature which I would rather avoid: it’s by the beach. I know what you’re thinking, and yes, I am well aware that a beach house is rather redundant if it is not at least in walking distance of the coast (and it would surely be called something else anyway), but I could live with that.

And it’s not just British beaches either. True, they have the added disadvantage of suffering largely shit weather for most of the year, when compared to their European counterparts, but I do not discriminate – I hate all beaches. Not to the extent that I will run screaming if I encounter one, and I can willingly suffer them for the kids, but I would far rather stay in sight of the sea (perhaps drinking a cold beer sat outside a beachside bar), than actually on the beach.

There will be people reading this who love going to the beach, and who will no doubt question my sanity, but I will give you eight perfectly good reasons why beaches are crap, and it would not upset me to never go on one again:

Yes, I know this is an obvious one, but I hate sand with a passion. No matter how cautiously you position yourself on the beach, it will find a way to enter your every crevice, and it will remain there regardless of how thorough your washing regime may be, for many a week to come. Worst still, on a windy day (which, let’s face it, were accustomed to in the UK), it will get in your eyes, up your nose and will whip your face until it is raw.

And then you have those people (I like to refer to them as ‘idiots’), who will take a picnic onto the beach, fully aware that they will consume more sand than anything else they have brought. Since when was grit a condiment? No one in their right mind would go into a restaurant and, having declined the offer of black pepper, beckon the waiter over to ask if the establishment perhaps has some lovely sand that could be liberally sprinkled over their lasagne.

Another blindingly obvious one but, as has tragically become all too apparent in the news of late, the sea is really, really dangerous. Fortunately, our boys are too young to be venturing into the sea unaccompanied, but there are many families who will watch their offspring from a distance, as they wade out into the ocean, and it only takes a few seconds for the situation to get very serious.

I don’t like swimming full stop, as it happens, but swimming in the sea scares the bejeezus out of me.

Then, on top of the perils of large waves and rip currents, the ocean has the added hazard of having some really mean fuckers swimming around in it. No, I don’t mean pensioners, I mean the kind of sea life which, given half a chance, will do its level best to injure or even kill you. True, we don’t have many sharks in our waters, and those we do have are supposedly quite harmless, but we most certainly have jellyfish, crabs and the like. They serve no purpose other than to inflict pain and misery. They are the wasps of the sea.

Also, even if we leave aside the dangerous elements of the ocean, who in their right mind would want to swim in it anyway? It’s very cold (even abroad) and it’s incredibly salty.

If I wanted something cold and salty that could possibly kill me, I’d go to Little Chef. 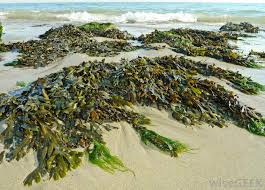 Ah, seaweed. The cobwebs of the ocean. I am sure that seaweed serves some kind of biological purpose, but for the life of me I can’t imagine what it might be, and the very fact there are around 450 kinds of the damn stuff (all with their own stupid latin names), leaves me with nothing but contempt for it. 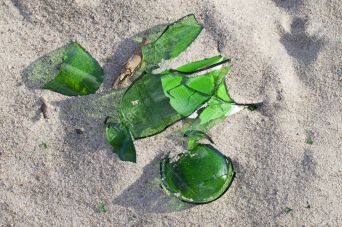 Mother Nature has determined that, if the sea and sand were not unpleasant enough, there should be the added ‘bonus’ of various sharp implements – particularly stones and pieces of shell – dotted around for you to impale your feet on.

Added to that, mankind has come along and, via the very worst of our society, littered the beaches with the likes of broken bottles and needles. Ok, this is more common in Blackpool than the Costa del Sol, but we have to share some of the responsibility for making beaches so damn hazardous.

Evolution gave us the rat, which is horrible, ugly, and carries all manner of nasty diseases. Then, we have pigeons, which are essentially rats that can fly.

But trumping both of those, ladies and gentleman, there is the seagull. Which is an angry pigeon hell-bent on attacking you. So, in other words, a very large, vicious, kamikaze rat of the sky. They will attack you and steal your food without any sense of remorse, and I had enough of that shit at school, thank you very much.

The favourite past-time of a child on the beach (that, and burying their sibling or parent up to their ears). Except, sandcastles are largely rubbish, rarely work as they are supposed to, and require countless trips to the sea to make the dry sand sufficiently wet enough to build with. Which leads me to my next issue…..

My main gripe with going to the beach is trying to get clean afterwards.

It will not come off. Your feet, in particular, will become encrusted with the kind of material they should probably construct aircraft black boxes from, or the nose cone of a space shuttle, because nothing will break it down.

National statistics dictate that only 1% of the British population has a body worthy of showing off at the beach (probably). Don’t get me wrong, I admire anyone who is comfortable in their own skin, we all should be, but there are certain people who, frankly, are enough of a sight to put me off my gritty ham sandwich.

But so long as they are happy, then fair play to them, and I will simply avert my eyes and settle my stomach.

The people I cannot abide, however, are the 1% who do have good bodies, and who make me feel tremendously inferior/inadequate/in danger of being rolled back towards the surf.

Ok, you eat well and you work out. Probably a lot. Well done you. But if you could see your way to donning a costume slightly wider than a piece of string, I’d appreciate it.

With the greatest respect to the civil parish of Bacton, the beautiful people tend to favour the beaches of Europe, not Norfolk, and some of the sights I witnessed on our recent day trip were frankly upsetting.