Last week, I told you about the first day of the charity road trip that my friend Gareth and I took part in at the end of June, and when we left the story, Gareth and I were retiring to bed (separately) at my in-laws in Norwich…

After breakfast, our trip continued very much as it had finished on the Saturday evening – bang on time. We aimed to depart my in-laws at 8:00am, and depart at 8:00am we most certainly did.

Realising it would not take us an hour to get to our first destination of the day, Lowestoft Town (even allowing for the fact we might have to pass through some kind of passport control to get there, being situated, as it is, somewhere near Holland), we decided to visit yet another bonus ground – Norwich City’s Carrow Road. Little did we know that, upon leaving ‘The Canaries’, we were about to encounter an entirely different kind of bird altogether….

Our arrival at Lowestoft Town was greeted by four people, including a lady who was easily the best dressed of the entire trip (even accounting for the gate-crashed wedding reception at Boston the night before).

‘Helen’ (I’m calling her that because, well, it was her name) looked resplendent in a long purple ball gown, complete with giant beehive hair-do. Quite what possessed her to dress like that, in order to meet two strangers in a football ground car park, remains a mystery, but we soon learned that she often ‘overdresses for the football’, and had not, contrary to our first suspicions, simply crawled out of bed from whichever party she had attended the night before.

Two things struck me about Helen, and I suspect they both struck Gareth too, such were their size. It was like she had smuggled two bald men into her very low cut dress, and neither of them were especially keen on staying in there. I hope I speak for both Gareth and I when I say we are not perverts, but if we looked anywhere within a five metre radius of Helen, passers-by would naturally assume we were ogling her boobs. They were so big, I would not be surprised if they had their own gravitational field.

It then transpired that the other lady in the group was the club photographer, and they had kindly opened the ground to take official pictures on the pitch. As Gareth and I stood on the centre circle next to Helen, she began to glance downwards (in hindsight, I suspect she was simply adjusting her scarf), before suddenly asking ‘Oh, and have you met Matthew and Daniel?’

Now, it later transpired that she knew two Stockport fans who had travelled down the previous season, and she wondered whether we also knew them (we don’t), but our initial assumption was that she had named her breasts ‘Matthew’ and ‘Daniel’ (or, presumably, ‘Matty’ and ‘Danny’ once you got to know them better).

Having waved goodbye to ‘the Trawlerboys’ (Lowestoft’s nickname, rather than another unfortunate sobriquet for Helen’s chest), we faced our longest journey of the weekend – just over two hours to Corby Town.

Having briefly stopped at another bonus ground en route (Histon) we arrived only slightly behind schedule, and were met by another exiled County fan – ‘Market Harborough Hatter’ – with his two young daughters. Not only did his daughters produce some bags of change to go in our collection tins, but he then presented us with a County shirt worn by one of our legends many years ago, which he was generously donating for us to auction.

The five of us then entered the ground, to be greeted by the sight of balloons, flags and colourful bunting. Initially overwhelmed by such a gesture, we then spotted a large bouncy castle on the pitch, and realised none of it was for us.

Sure enough, we had now managed to gate-crash a children’s birthday party too, although when the chap behind the bar found out why we were actually there, it turned out he had heard about our trip, and kindly invited us in for a quick drink.

Chalking up yet another bonus ground on the way (Northampton Town’s ‘Sixfields’ Stadium), we arrived at Brackley just under half an hour late. ‘The Saints’ had certainly not come marching in to meet us however, so we managed to take a quick photo of a stand which closely resembled a Cold War bunker, and then got back on the road to try and make some time up. 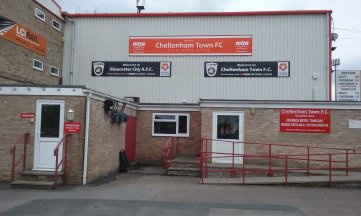 Gloucester City’s ground was badly flooded a few years ago (making it easier to bring their subs on, arf!), so they currently play their home games at Cheltenham Town’s ‘Whaddon Road’, which was actually a bit nearer for us, and enabled us to restrict our tardiness to just fifteen minutes.

We were met by Gareth’s sister-in-law and her partner, but realising we still had most of the Midlands still to conquer, we were unable to spend as long with them as we would have liked. 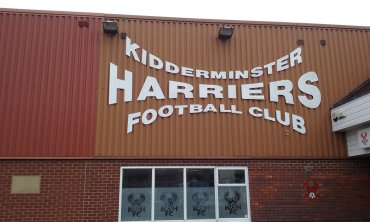 Like Gloucester City, Worcester also spent last season residing at their neighbours’ larger property, playing their home matches at ‘Aggborough’ – the home of Kidderminster Harriers. Here we met a good friend of Gareth’s – ‘Kiddy Andy’ (being a reference to his supporting of the Harriers, rather than anything more distasteful) – but again we were sadly unable to spend very long with him.

Andy kindly presented us with a bottle of beer each to enjoy when we got home that evening, and we bid him farewell (making a quick detour to Worcester’s new ground in, erm…. Bromsgrove, before our next stop).

Solihull were the other team to be promoted from County’s league last season and, like North Ferriby the day before, their ground was also a disappointing cesspit. Continuing my tradition of christening certain grounds, I again took a piss behind their stand (although, unlike at Stalybridge, this was a urinary protest), and away we went.

I think this picture says it all really. Shut. Shit. Move on.

Prior to our trip, I had joined as many online supporter groups as I could – in an attempt to spread the word of what we were doing – and while the response from Nuneaton’s fans had initially been very positive (even though no one bothered to actually donate or turn up to meet us), their bitter rivals Tamworth were the complete opposite.

In fact, I only received one reply to my post on their forum, and it was more of a pro-Brexit rant than anything else, so my view of Tamworth was not particularly favourable before we arrived. However, that was all about to change.

One Nuneaton fan had jokingly referred to Tamworth’s Lamb Ground as ‘the tip’ (even promising to donate, if we would take some of his garden waste with us to deposit there), but having subsequently seen Nuneaton’s ‘Liberty Way’ ground from their rusted and locked gates, his comment strikes me as very much ‘people in fuck-ugly glass houses….’

In fairness, The Lamb Ground was hardly the Taj Mahal either (a delightful looking curry house we had passed on the way), but that was mostly due to the fact they were laying a brand new pitch at the time. What matters, is the welcome we received.

Unlike at Harrogate and Lowestoft – where we had anticipated some form of greeting – we hadn’t had any contact from Tamworth whatsoever, so when we arrived and saw a few cars in the car park, we initially feared a repeat of the ‘Glanford Doggers’ from the day before.

However, it turned out that, far from being unsavoury sex-pests, the five Tamworth fans who had braved the rain to honour our (late) arrival, were the loveliest of people. Not only did they invite us in to the ground to have more official photographs taken, but they then presented us with a huge bag of goodies, including snacks, drinks, and even a signed football for auctioning.

As a result, Tamworth – rather unexpectedly – joined Harrogate and Lowestoft in our top 3 clubs of the weekend. 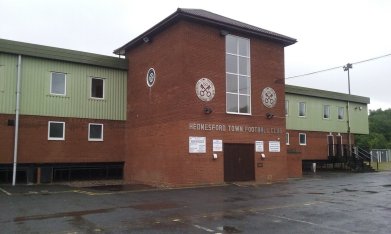 The only downside to such a nice reception at Tamworth (when we had been expecting a quick photo and hasty departure), was that we were now badly behind schedule again. Fortunately, not only had I over-estimated how long it would take to get to our penultimate ground, Hednesford’s ‘Keys Park’, but it was again locked and deserted, so the quick photo we had planned at Tamworth, merely got delayed by one stop.

Determined to try and get as near to the ground as possible (which looked more like a factory than a football stadium), we parked up at the gates, leapt over them, and ran down the track that lead to their main stand like we were on ‘Challenge Anneka’ (or another more current – and less camp – reference).

We posed, comically, outside their main entrance, before noticing the signs which warned that there was constant CCTV in operation. Oh well, that should give the security team something to talk about (although not, I would imagine, as much to feast their eyes on as their counterparts at Scunthorpe). 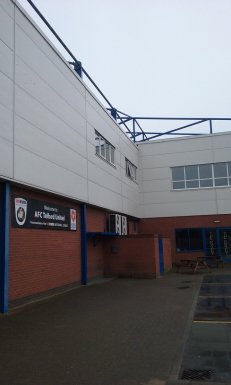 Our last ground of the adventure before heading back to Edgeley Park. No official welcome again, but we were met by our good friend and fellow County fan ‘Shropshire Hatter’, who posed for some quick photographs, before making his way home in the rain.

And that was it. The race was then on to get back to Edgeley Park for our scheduled arrival time of 9:00pm.

Ok, we didn’t quite make it back on time, but turning up only five minutes late, having driven over one thousand miles, was not to be sniffed at, and we had two good reasons for being ever-so-slightly late.

Firstly, we were very nearly involved in a nasty crash, when I came around the bend on a country lane to be greeted – very abruptly – by the mangled wreckage of a car blocking the road. Thankfully, not only did everyone appear to be ok, but my reflexes were not as subdued as they might have been after such a long drive, and we were able to safely navigate around the crash without further incident.

Any confidence in my driving ability was, however, rather short-lived, as a far more serious incident occurred only moments later. Remember how I mentioned, at the start of last week’s entry, that there had been a murder on the trip? Well, I was the murderer, and my car was the weapon.

Actually, ‘murder’ is a little extreme a description, but I may not have held your interest for so long, had I more accurately referred to the crime as ‘vehicular avian slaughter’. In fact, technically, it was vehicular avian suicide, and that is certainly what I would argue in a court of law, but I doubt the surviving family members (the ones who didn’t bounce off the front of my car and end up in a hedge) would see it that way. Oh, the guilt.

Still, we had a deadline to keep, and we arrived back at Edgeley Park tired, but ultimately very proud of what we had achieved.

The total amount raised has now exceeded £2,000. Not bad, considering we essentially spent the weekend dicking around, whilst eating sweets and listening to music. To everyone who donated, no matter the amount, thank you so very much. We’ll be in touch about our next big adventure soon!

Oh, and for anyone outraged at me for senselessly murdering a door-to-door make up sales lady, that’s Avon you twat. ‘Avian’ means ‘bird’.