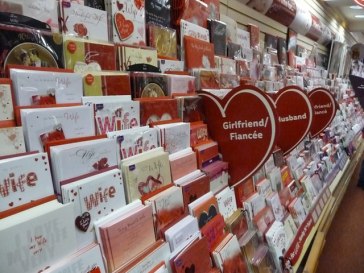 Last Sunday – as I am sure you are aware – was Valentine’s Day, and I don’t like it.

This isn’t because I am not romantic. In fact, it’s quite the opposite: I enjoy making grandiose romantic gestures to my good lady wife (although I have come to learn that she hates surprises with a passion, so any such displays of affection must be done with ample warning and full prior permission), but I want to be romantic on my terms, not when Clintons and Interflora tell me I should be.

I want to buy flowers and chocolates for the right reasons (like when I have done something wrong, or because they were on offer at the petrol station on the way home); not because every other poor bastard in the country is being forced to at the same time.

Sure, I understand that flowers can be pretty, and that some (perhaps most) women enjoy receiving them, but for one week of the year they become the most expensive and sought-after commodity on the planet, and this strikes me as slightly ridiculous when – regardless of your efforts – they will be dead within a week or so.

Let me explain what I mean, by way of an analogy. Parrots are also brightly-coloured and pretty, but if I bought my wife one, and then advised her that she must care for and nurture it every day – even though, no matter how loving she was, it wouldn’t survive more than a week – I suspect she wouldn’t be best pleased. Just imagine the accompanying card:

It’s you that I seek

It’ll be dead in a week

If I also then revealed that I had deliberately made my purchase during the one week of the year when parrot prices quadruple for no apparent reason, I am in no doubt that I would end up returning said bird to the pet shop post-haste, in scenes not dissimilar to that famous Monty Python sketch (I’ll play myself, and the shopkeeper will be played by Michael Palin):

Shopkeeper: “Why? What’s wrong with it?”

Me: “Listen, I know a dead parrot when I see one.”

Shopkeeper: “When did you buy it?”

Me: “It was meant to be a Valentine’s Day gift.”

Me: “Is that why you charged me four times as much?”

Shopkeeper: “Indeed. Everyone wants parrots this time of year.”

Shopkeeper: “That Ferrari outside isn’t going to pay for itself.”

Me: “Well, it’s no good to me now. It ruined Valentine’s Day for my wife. Stupid bird.”

Shopkeeper: “That’s no way to speak of your wife.”

You get the idea.

In short, Valentine’s Day is a con, designed to make florists and card retailers enough money that they can purchase a small Mediterranean island to retire to at the age of 43. As an old-fashioned romantic, I resent this extortion.

I have decided, therefore, to fight back, and have devised a plan to save Valentine’s Day – and romance in general – for everyone.

Ladies, you don’t need to read this next bit. It’s just me and the fellas, ok?

Have they gone? Good.

Lads, romance should be about you as a couple (or small group if you happen to be a Mormon or a Premier League footballer) and should be spontaneous. It shouldn’t be a date fixed in the calendar by retailers, and certainly shouldn’t be an excuse for them to hike up the prices of what they deem to be romantic. Don’t let them get away with it. Let’s make a stand together.

A message to Clintons:

We’re done, so fuck you.

Truth be told, my good lady wife would be just as happy with a Chinese take-away and a bag of Revels on Valentine’s Day, and so a dozen red roses and a naff card are likely to be met with disappointment – particularly when I could have purchased half of the Canton Kitchen menu for roughly the same price. Ok, a take-away would last even less time than the flowers, but we would both get far more enjoyment from it, and it would probably smell nicer.

Chances are, your other half is the same. I’m not suggesting you should forget Valentine’s Day altogether – that would be relationship suicide – you just don’t need to be so obvious and typical about it; and you certainly shouldn’t concentrate all your romance on that one day, while ignoring the other 364. Doing something unique, which shows you put some real thought into it, is likely to be far better received.

It’s actually quite sad to see dozens of men queuing up in supermarkets with red roses and pink champagne, thinking they’re being romantic. Maybe I’m being unnecessarily harsh, and perhaps this is exactly what your partner is hoping for, but if everyone else is buying more or less the same thing, is it really that romantic? To me it just smacks of unoriginality and laziness.

Think about your partner and what she likes. What would make her feel special, loved, and attractive? Then, when you’ve worked that out – and this is the important bit – don’t fucking wait until 14th February to buy it for her. In fact, while we’re at it, you can rule out the remainder of February too (she’ll see right through that, and assume you’ve only bought it for her because it was reduced after Valentine’s Day). Just pick a random non-February day, and be spontaneous. Or, better still, save the idea for the next time she has had a shitty week, or is feeling down, and then surprise her.

Look, the last thing I want to do is come across as some kind of relationship counsellor here, because I am by no means an expert, and have made plenty of mistakes myself over the years (especially when buying gifts), but my wife has stayed married to me for approaching twelve years now, and it’s not as if I’m good-looking, well-endowed or loaded*, so I must be doing something right.

You can come back now ladies….

Welcome back. Me and the lads have had a chat, and we think we’ve figured Valentine’s Day out from our side of the deal, so now it’s your turn.

It’s quite simple, really. Society seems to dictate that you should surprise your man by wearing very little, and pouncing on him like a wild animal.

Society is usually right, so it’s probably best to go with that. Men don’t need presents. We don’t need spontaneity or to feel unique. Be obvious. Men are simple beings, and we’re quite happy with what every other man is hoping to receive on Valentine’s Day. Sure, we might say that we’d love to just watch chick-flicks and eat all the cast-off chocolates that you’ve rejected (apart from coffee creams, we have to draw the line somewhere), but do you honestly think we showered two days in a row for no reason? Come on.

I don’t mean to be rude

But forget all the gifts

Now, here’s the important bit (and I’ve already explained this to the lads) – don’t wait until Valentine’s Day to surprise your other half. The other 364 days of the year are just as important.

To recap: Don’t hold off until Valentine’s Day each year to show your partner that you love them. Spend each day, wherever possible, doing the things that will make them happy.

It’s not about gifts, or cheesy over-priced cards. It’s not about the biggest bunch of flowers or a massive heart-shaped box of chocolates. It’s not about booking a table at an over-crowded restaurant three months in advance, and then paying twice as much to eat there. It’s not about flying to Paris (who decided Paris was the capital of romance anyway?).

It’s about you and your partner. Work out what makes them tick, why the two of you got together in the first place and, most importantly, why you’re still together. Celebrate that.

As a nation, we need to make a stand and let the retailers know that we’re not going to fall for this shit any more. Somewhere along the line we’ve let them dictate our behaviour, then charge us extortionate amounts for the privilege, and unless we fight back in numbers they’ll keep getting away with it.

Right, that’s my rant against unnecessary retail commercialism over….