Well, here it is, my personal top 10 Bond films in descending order:

You don’t need me to explain the start of this film, when Alan Partridge does it so well for me:

What follows from an admittedly dubious opening, is a really slick and watchable Bond film. The theme tune, when Steve Coogan isn’t singing it, is a classic. The villain, whilst not the best, does have another very cool base – this time underwater – and Barbara Bach, who is admittedly a bit funny looking, is a passable bit of eye candy as Roger Moore’s love interest.

But this film deserves to be in the top 10 for two very good reasons: Firstly, it marks the debut of Richard Kiel as the unforgettable henchman ‘Jaws’.  Secondly, whilst I would always prefer Bond to be driving an Aston Martin, how frigging cool is a Lotus Esprit that turns into a submarine?!

Quite simply, this is the second best film to be released in 1977.

This film just oozes class. It was only the second Bond release, following just a year after Dr No., but already Connery had made the role his own, and looks more comfortable this time around. Due to the success of Dr No., United Artists doubled the budget for From Russia With Love, and it shows – there are some superb locations. Robert Shaw, as Donald “Red” Grant, is fantastic; the evil Rosa Klebb and her dagger shoes give us the first taste of gadgetry in a Bond film; and Daniela Bianchi as the Bond girl is extremely easy on the eye – if a little rubbish when it comes to achieving anything practical (although, in her defence, she is drugged for part of the film). The soundtrack is also fantastic and, were it not for Connery’s next outing in the role, this would be my favourite of his 007 portrayals.

I’ve surprised myself a little here. When I was at law school, a friend and I watched all the Bond films back-to-back (up to and including The World Is Not Enough, which was the latest release at the time), to raise money for charity. We called it a ‘Bondathon’, amazingly just one year before Alan Partridge did the same thing (he even called it a Bondathon too). I swear one of the show’s writers must have overheard my friend or I discussing it in the pub at some point, and stolen the idea.

Anyway, to cut a long story short, it took us a little over 43 hours to watch them all, and The Man With The Golden Gun was the point at which we nearly admitted defeat. When you have been up all night, you’re slightly delirious from lack of sleep, and Roger Moore is trying to be suave (but looks more like he’s having a stroke), it does leave a nasty taste in the mouth – although that may, in fairness, have been all the Red Bull we had consumed. For years, I couldn’t watch this film and, in all honesty, I wasn’t sure I ever would again.

However, I saw it just a few months back, and not only managed to survive the ordeal, but really enjoyed it. Christopher Lee is a fantastic actor, and makes a superb villain, along with his French midget henchman Nick Nack on their desert island paradise lair. There is a flying car, which is pretty ridiculous, but it somehow works and, speaking of cars, one of the greatest motoring stunts in cinematic history (long before CGI ruined everything) takes place on a twisted and disintegrated bridge. It would be even better without the silly sound effect they added afterwards but still.

Even Britt Ekland, whilst bloody useless, does a fine job of squeezing into a little bikini.

This film, aside from being a very good Bond release in itself, will always hold a special place in my heart for two reasons. Firstly, as I’ve already explained, it was the last film that my friend and I watched when we completed our ‘Bondathon’ more than 10 years ago. Secondly, it marks an emotional farewell to Desmond Llewellyn, who had played ‘Q’ for 36 years.

He apparently had no plans to retire from the role, but there is an emotional scene when he more or less hands over to his successor, ‘R’ (played by John Cleese) and then slowly lowers into the ground. Sadly, Desmond passed away just one month after this film was released, and I remember it being screened at Leeds Festival the following summer when, following this scene, there was a spontaneous standing ovation for him. Very touching, and it still brings a tear to my eye when I think about it.

Back to the film – there’s good plot and a decent performance from Pierce, Robert Carlysle is great as the psychopathic villain, and there is a fantastic chase scene on the Thames prior to the opening credits.  Garbage’s theme isn’t one of the best, but it’s not awful either, and Denise Richards is in it, back when she was quite pretty.

Ok, The World Is Not Enough is very good, but when it comes to choosing Brosnan’s best contribution to the franchise, this is a no-brainer. Goldeneye was his debut, and what a debut it is. Right from the explosive opening, when Bond bungee jumps down a dam before (somewhat recklessly) chasing after a falling plane, it’s all out action. Isabella Scorupco would probably be in my top 3 Bond girls (and when you consider her competition in this film alone is a femme fatale who crushes men with her thighs – yikes – that’s some going), while Brits Sean Bean, Robbie Coltrane and Alan Cumming are all excellent in their supporting roles. Talking of Brits, it was a bold move to cast Judi Dench as a female ‘M’, but she plays the role fantastically, and continued to do so until the latest film just a few years ago.

I’m personally not a huge fan of the Tina Turner theme, and don’t get me started again on Bond driving a (this time convertible) BMW, but it shows how good the film is if, despite these issues, it still sits just outside my top 5.

Speaking of the Top 5, and of very good debuts, this film introduces the latest actor to play Bond, Daniel Craig. It commences with quite a dark opening scene, showing Bond carrying out two assassinations (without so much as a flinch) in order to earn his double-O status, and culminates – via some high stakes Poker (updated from the Baccarat that Bond plays in Fleming’s book of the same name) – with his love interest drowning herself. Hardly laugh-a-minute, and a million miles from good ol’ Roger’s Bond, but it’s a very classy film with some excellent action scenes.

I will backtrack slightly on one of my previous comments, by saying that Mads Mikkelsen almost convinces us that French bankers can be threatening, and Eva Green as the Bond girl is certainly up there, but it’s Craig who really makes this film what it is. Plus, the Aston makes a timely – if all too brief – return (with the invisible paint thankfully misplaced by Q branch) for a short-lived car chase, that ends up with Bond rolling the car and nearly killing himself.

I know a lot of people place this as their favourite Bond, and it is excellent, but I’ll make a case for the next 4 being better.

By far the best of Roger Moore’s efforts, in my opinion, and again it was his debut. It’s interesting that my favourite offerings from Roger, Timothy, Pierce and (technically) George, are their first films as 007.

Solitaire is my favourite of all the Bond girls (don’t judge me) and the opening scene with the fake funeral procession is fantastic – in fact, the whole voodoo theme, with Kananga and Baron Samedi, is great.

Paul McCartney’s theme tune is up with the best, and the stunts are extremely well done – including Bond’s iconic escape from being eaten by crocodiles by running over their backs.

Where do I start? This film is every Bond fans’ dream. The action is non-stop, the stunts are explosive, there are so many in-jokes and references to earlier films that it’s hard to spot them all on the first viewing, and it all ends back at Bond’s family home for a thrilling showdown in Scotland, with Bond having travelled there in the old Aston Martin DB5. Wow.

We bid farewell to Judi Dench as ‘M’ at the end of the film, but she is replaced by the equally brilliant Ralph Fiennes, who I hope remains in the role for some time. Ben Whishaw (who voices Paddington in the recent film, if you didn’t already know), does a great job of taking over – and revitalising – the role of Q, and Javier Bardem is pretty terrifying as the bad guy.

In fact, the only bad thing I can think of regarding this film is (whisper it) the theme tune courtesy of Adele. I know it’s really popular, and it won lots of awards, but I just don’t like it. I don’t mind her personally, but they could have at least tried to find a singer who could pronounce the name of the film properly. Still, it’s not as bad as Madonna’s effort.

Surprised? Ok, so it’s Dalton playing Bond, but that’s no reason to discount it. The plot is great, the action sequences are among the best in the series, the A-ha theme tune is my favourite of all time, and it’s just a very, very good film. I can watch this one over and over again (in fact, I did not so long ago), and although I know it backwards, I never tire of it.

It’s perhaps my guilty pleasure when it comes to Bond, and most would place it far further down, but this is my list, so screw you if you don’t agree. In fact, I can only think of one Bond film that I prefer…

Yep. It just had to be, didn’t it? From the Shirley Bassey theme tune, to the Aston Martin DB5 (complete with ejector seat), to Connery at his very best and Honor Blackman at her (much, much younger) finest, to Oddjob and his bowler hat, his boss in the title role, big productions, great action sequences and stunts, charm, wit, charisma, and a laser going dangerously close to Bond’s secret weapon – ending his favourite pastime, if not his life.

Quite simply, it is cinematic perfection.

So, there it is ladies and gentlemen. Thanks for humouring me.

You might not agree with some (or most) of my list, but any Bond fan would be hard pushed to disagree with my winner.

Oh, and a good friend of mine, since reading the first part of this blog entry, has pointed out that I could/should have referred to Bond’s evil nemesis as Ernst Stavro Blogfeld. 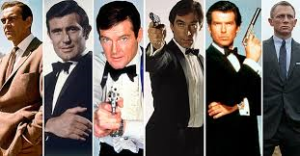