Those of you who may not have appreciated or enjoyed my recent football-related blog as much as earlier pieces, needn’t fear of a repeat, as I write this just days after County managed to lose 2-0 (and have two men sent off in the process) against a team I had to fucking Google last season to work out where in the country they were. That’s how far we’ve fallen and, having suffered this embarrassing defeat, County and I are not currently on speaking terms.

So, with that in mind, let’s introduce the kids.

I have two sons. Oliver (Ollie), who will be five in May, and Isaac (Zac, Zaccy, Zacbags, The Zacatron….), who will have his first birthday just three days earlier.

They often say that “good things come in threes”. Not kids. Not boys anyway. Two is plenty thanks, and we’re finished. Neither of my siblings have kids, so let them take some of the pressure for a change, we’ve done our bit.

Apart from the fact I wouldn’t want my good lady wife going through pregnancy and childbirth again, the logistics of having more than two children just don’t stack up, do they? Human beings have two hands. Just two. One to grab each of the little fuckers with. Then there’s the fact that there are two of us, so if we’re out somewhere, and they run in different directions, we can go after one each. Imagine having three children that all decided to spontaneously make a break for it. You’d have to choose your least favourite, and try to save the other two.

Admittedly, with Isaac not even crawling yet, catching him is relatively straight-forward – even for someone with my expanding waistline, dodgy knees and shortness of breath – but there will come a time when even these days of screaming and cursing will seem like a fond memory. God help us when both of them can run.

Ollie, you see, is too bright for his own good. Don’t get me wrong, I’m immensely proud of the fact that he is apparently reading at the age of a 7/8 year old, and his confidence at such a tender age is often dumfounding, but sometimes that intelligence can come back to haunt us. I’m sure lots of 4 year olds have their tantrums, for example, but how many would turn around during a telling off to yell “Don’t you bark your orders at me!”? How many would strike up a conversation with the old dear who works in the charity shop around the corner, to inform her that he “won a bet with Daddy the other night, and Daddy had to run around the house as a rudey-nudey because I won”? How many would refuse to leave the comfort of a potty for the big-boy toilet because, and I quote, “I guess I’m just not a toilet kinda guy”?

Often, because of his intelligence, and the fact you can have proper, grown-up conversations (and arguments) with him, we forget that he only started school in September, and he’s emotionally quite under-developed. Some of it may come down to tiredness, or frustration because he wants to do more than he is able, but he has a tendency to burst into tears at the drop of a hat. A recent example: I put milk on his cereal. Honestly, I’m such a cretin sometimes.

But, he’s a bright lad, and of that we can be proud. I’m sure, if he can just stop crying at the slightest things (I’m one to talk, Noel’s Christmas Presents gets me every year), he’ll go far in life:

Isaac, in contrast, whilst only 8 months old, is almost certainly going to be tougher, and will no doubt be beating the shit out of his elder sibling as soon as he takes his first steps. This may be down to the fact he had a tricky start in life, bless him, so he had to learn to fight from a very young age (and we’re talking days rather than weeks here) or, more likely, he’s possessed by some malevolent demon. Either way, we can tell even now that we’d better not cross him. He will remember, and he will destroy us. Even other parents have likened him to Stewie Griffin (which, I am aware, is my second Family Guy reference in just 4 blogs, sorry).

I don’t know whether it’s the evil glint in his eye, shortly before he tries to violently rip my bottom lip off, or perhaps it’s the wild banshee-like scream he emits during and after his assault, but I do fear that, one day, we might end up having a home-visit from the priest who recently baptised him (Tubular bells playing somewhere in the distance, and green vomit everywhere).

Despite this, he has the best smile in the world and, as we all know, cute beats evil (like some kind of behavioural rock/paper/scissors). Don’t believe me? Look at this: 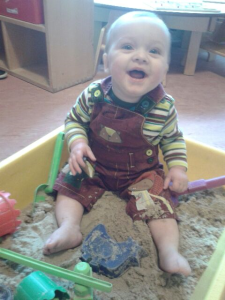 How can you stay mad at that face?

(he said, shortly before his body was discovered by a passing dog-walker)